Guys, We Are Finally Getting the Tiny Penis Emoji We Deserve | 22 Words 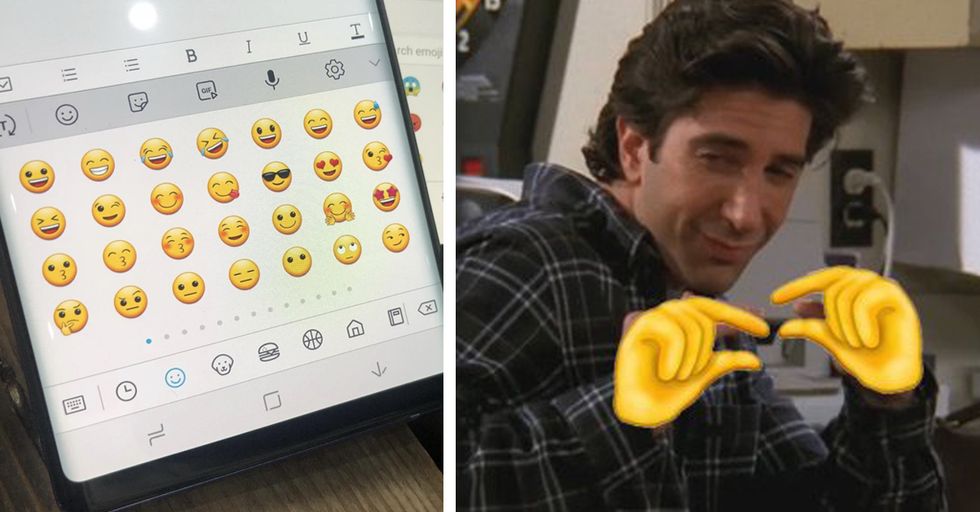 Guys, We Are Finally Getting the Tiny Penis Emoji We Deserve

So...there's really no classy way to say this. The Unicode Consortium just revealed its latest emoji update, set to release in 2019. And among that 200+ emojis is the 'tiny penis' emoji that nobody asked for, but everyone is talking about.

This will be part of Unicode's 12.0 update, although we may not be seeing it for a while yet. Some of the new emojis are goofy, some are woke, and they're all entertaining. Unicode has introduced its entire assortment, so check them out! Plenty of people are already planning out how they're going to use the new additions.

See what your top-used emojis for this year will be, and what people are saying about it!

Unicode Consortium is the nonprofit behind our emojis.

One of the emojis on the list is...kind of suggestive.

Because Unicode's 'pinching hand' emoji has been officially approved for release.

Now, to be fair, it's got some other legit meanings.

See? That's definitely a logical use of the emoji.

But, of course, that's not ALL it could be used for.

The people of Twitter were thinking of something else.

In the words of Dr. Seuss, they had an idea. They had a wonderful, awful idea.

So here's this lil' PSA.

Annoying guys who slide into peoples' DMs are going to get an interesting new reply.

Ladies, we can now call someone out with just a symbol.

Namely, a symbol that comes with implications about a certain part of the male anatomy.

Basically, this is gonna be ladies from now on:

Hey, unsolicited pics like that are just upsetting. They deserve being called out!

Ah, yes, the power of toxic masculinity is about...[insert pinching hand emoji here] this much!

And yeah, there have also been a few memes surfacing...

Oh, Ross. Those gloves look a little big on ya.

So put this emoji to good use.

Yeah, that checks out. I'm pretty sure a lot of people will be venting about their exes like this.

It also got a tad political.

@Emojipedia Hey @twitter can you just make this an automatic emoji attached to Trump’s handle - it would save so mu… https://t.co/KIbZ8sKzLD
— Lisen Stromberg (@Lisen Stromberg)1549513746.0

Well, if Trump stopped talking about how definitely *not* small his hands are, maybe we'd stop joking.

Actually, some people think Trump got a couple of emojis out of this.

@TheLastLeg is it wrong that Trump is getting two emoji's to describe him? #pinchinghand #orangutan
— noam Leshem (@noam Leshem)1549531880.0

Oof. Did any ice come with that burn?

Ladies and gents, we have a winner.

Based on hype alone, pinching-hand is the clear frontrunner of the pack.

It's just so universally usable.

Hey, don't jump to a conclusion! We could be describing the size of anything with that pinching hand.

And we're about to have the whole rainbow (and more) at our fingertips.

Not that everyone is fond of the new colors.

I'm sure someone, somewhere, is happy that we'll have brown hearts now. For some reason.

And how about this new addition?

In fact, there are a few new medical emojis.

Delighted to announce that our emoji proposals: drop of blood, plaster and stethoscope have all been PASSED and wil… https://t.co/o3OBoygqZd
— GiveBlood 🩸🩹 (@GiveBlood 🩸🩹)1549530094.0

Cool, right? I didn't know that organizations could propose emojis like that!

And people are rightfully pumped about this one, too!

Giving blood isn't something many people think about unless a blood drive comes around, but it has a huge impact!

Some were led to believe it's purely a 'period blood' emoji.

And sure, we could use it for that (most people who have periods are definitely inclined to complain about it once in a while), but that's not the only thing.

So for the record:

This was a joint proposal and the drop of blood doesn’t just signify menstruation. There are millions of people glo… https://t.co/oSjHbwqvLF
— GiveBlood 🩸🩹 (@GiveBlood 🩸🩹)1549514691.0

There are tons of ways that blood-drop emoji can be used and understood.

We're also getting a yawn-emoji.

This is another handy emoji if you're trying to wordlessly insult someone, tbh.

And we haven't even gotten to the cute stuff!

Otters and sloths and flamingos, oh my! We're getting a bunch of new animals with this update.

Plus, a greater range of skin tones.

Real life is diverse. Now our emojis are, too.

Disabilities have also been taken into consideration.

This includes hearing aids, wheelchairs, an emoji to indicate deafness, blindness, and more.

Take a look at the bigger picture.

Looks like we'll be having fun with our chat groups in a months or so!

Here's a full view of the emojis for the disability community.

The final emoji list for 2019 has been approved and includes several new emojis for the disability community, inclu… https://t.co/idND7NSzWD
— Kendall Brown (@Kendall Brown)1549410774.0

And it's nice to see something as mainstream as our messaging symbols branching out into this!

There have still been complaints...

Honestly, fair. We're not always smiling AND sticking our tongues out! No weird smiles needed, you know?

The 12.0 emoji update will be rolling out over the next few months. While Unicode has it all ready, it's up to individual phone companies to integrate it with their emoji collections. So keep an eye out for the new additions! Share this breaking emoji news with your friends!