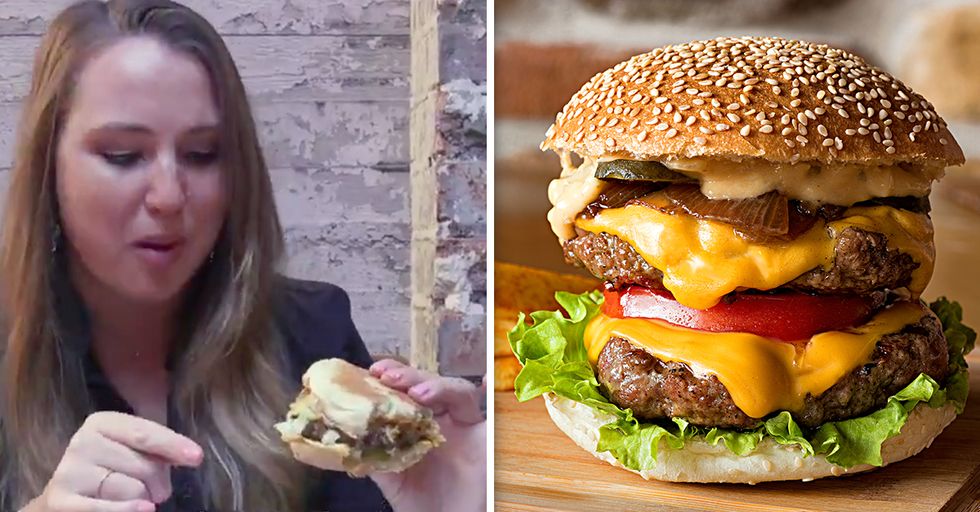 The hamburger is as ingrained into American culture as watching baseball. Most of us have grown up eating hamburgers, and don't give them much thought other than, "Wow, this is delicious!"

I mean, really– what's better than seeing the glorious glow of the drive-thru, late at night when you're absolutely starving. You're telling me you don't order a perfectly greasy burger and devour it before you even get home. Only me? Cool, cool.

Regardless of your feelings on fast food or burgers, you can't deny that the meal is a classic. Everyone likes burgers! Whether they're topped with cheese, or made of veggies, or sandwiched with lettuce instead of bread, no one can say that they hate burgers.

You would think that eating a burger is pretty basic, right?

You pick the burger up and devour it as quickly as you can. There's really no if's, and's or but's about it.

We can't make it any simpler. It's just a burger! So, how in the world have we all been eating them wrong?

As it turns out, you should flip a burger upside down in order to eat it properly.

When you turn a burger upside down, all the yummy juices are trapped in the thicker bun– now it won't fall apart.

Obviously, this is a revolutionary idea.

How long have we been eating burgers the wrong way? Why has this gone on so long?

The internet is collectively freaking out.

And if there's one thing the internet does a great job with, it's freaking out. Don't worry– it gets crazier.

I know this fact can be shocking, but aren't you glad there's a list like this to help you out? Let's check out some other foods you've been eating incorrectly.

There's no need for a plate. Use the carton that your take-out arrives in!

Keep cookies soft by storing them with a piece of bread.

I'm testing a new theory out that if you put a slice of bread in with cookies, the cookies will stay soft. http://t.co/Ad0meIkwOf
— Jarid Schlenz (@Jarid Schlenz)1379969096.0

Strange? Yes. But it's also a brilliant idea.

Stop using the microwave to reheat your pizza.

It's way better in a skillet and doesn't turn all mushy in the microwave. Also, can we all agree that leftover pizza is way better than fresh pizza?

Put a wet paper towel over rice that you're reheating.

It'll help retain the moisture and not get super dry. This way, you won't be biting into tiny little shards of glass.

Don't throw away your Sriracha bottles!

You have to make that sweet Sriracha oil– which is a great substance to cook with.

You know how ice-cream gets super hard and freezer-burnt?

Put the ice-cream container in a ziplock bag and it'll stay nice and soft for your eating pleasure. You'll no longer be in danger of snapping your spoon in half when you go dig into some Chunky Monkey.

Are you frustrated by uneven and lumpy cakes?

Get a nice, smooth surface by lining tinfoil with some wet paper towels. Wah-lahh! The perfect cake. Betty Crocker would be so proud.

Don't fret. Put two pieces of paper towel in with your spinach, so that it stays nice and fresh. Paper towels: the MVP of food hacks.

Here's a very simple way to cut a watermelon:

With an ice-cream scooper! You can avoid the hassle of a mess and it makes the perfect portion.

If you don't have an ice-cream scooper, you can also cut a watermelon in cubes.

Then, you can simply slide pieces out without any hassle.

Did you know that cooking your salmon on a bed of lemons is a wonderful idea?

The fish won't stick to the grill, and it'll infuse it with some seriously delicious flavor.

You've been peeling a banana wrong your entire life.

This one is shocking, but it makes sense when you think about it. How often have you accidentally mushed a banana because you squeeze at the top?

No need to go fishing for eggshells with your fingers.

Grab the remainder of the eggshell and get digging. It's much easier than using your index finger.

Pour boiling hot water into your mug before you pour your coffee.

Make sure to dump the boiling water out, but it'll keep your coffee warmer for much longer. Nobody wants that lukewarm mess of a coffee that hits mid-morning.

You think you know how to make the perfect sandwich?

Think again! Instead of layering, cut those circular lunch meats to perfectly cover the bread.

Use another shell and you're all good! Seriously, why haven't I thought of this before?

This one is insane.

We've been pouring orange juice incorrectly this whole time! How dare we?

Glass ketchup bottles are a nightmare.

If you just tap the "57" on a glass bottle, you can avoid disaster. It seems so much easier than shaking the thing, doesn't it?

This one seems obvious, but it isn't.

Who knew cans had built-in straw holders? This is a brilliant discovery and my life will never be the same.

Eating a hamburger upside down doesn't seem like such a big deal now, does it?

Now that you know how to properly eat a hamburger, you can never go back to being a mere peasant who eats a burger right-side up.

You must go forth and spread the good news.

But it does make one wonder, there must be so many foods we're constantly eating the wrong way.

And we have no idea what they are.

Who knew scooping watermelon with an ice-cream spoon could make our lives so much easier?

Or that a burger would hold better when eaten upside down?

And never let anyone eat a hamburger the wrong way again. Share this with a friend who is obsessed with life hacks!