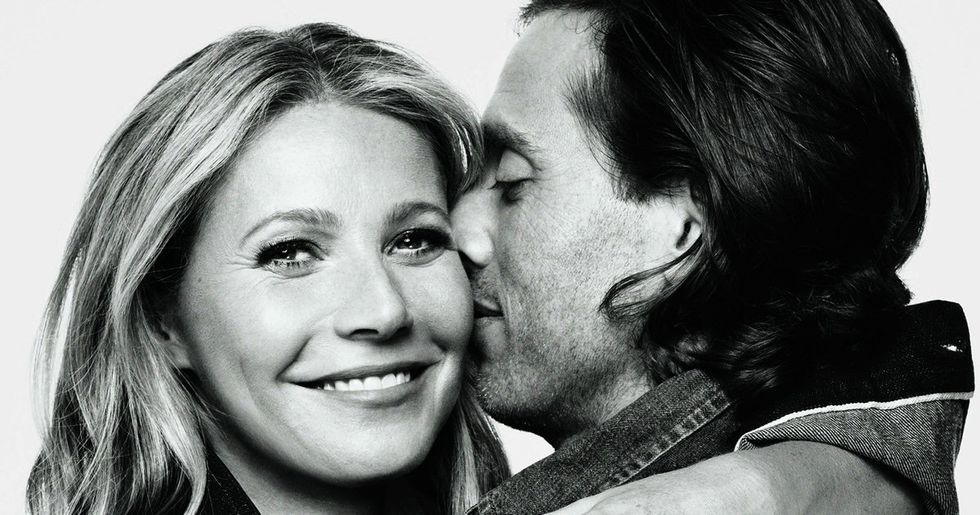 Gwyneth Paltrow is known for pushing boundaries. Whether we're talking about her "alternative" health website Goop or her "conscious uncoupling," it's obvious that she does things a bit differently. Let's be honest: more often than not we love to make fun of her (do you remember the fiasco when she suggested women steam their lady bits?) but this time she may have gotten something right.

Just under a year ago, Paltrow married TV producer Brad Falchuk. They appear to be incredibly happy together. but the transition into married life hasn't been easy: each of them had kids from a previous marriage already. So Paltrow's intimacy coach (yes... intimacy coach) had a suggestion: live in separate homes half the time.

Speaking as a married woman I can confirm: this is not a wild suggestion. Absence makes the heart grow fonder as they say, and not living with your spouse clipping their toenails makes the intimacy much easier. We can finally get behind a piece of Paltrow advice, so let's dig in and see what she suggests.

Gwyneth Paltrow is one of our favorite celebs to hate.

She's had some seriously impressive gaffes over the years.

Let's take a quick walk down memory lane shall we?

It's always fun to remember the weirdest things Paltrow has done.

One time she got stung in the face by bees on purpose.

She has also shared that there is a correct way to yawn.

"Gently tilt your head back to a comfortable position and allow your mouth to hang open widely while you gently extend into it." Ok, Gwyneth. Or I'll just yawn.

She also has a very...odd use for jade eggs.

Just stick em in your vagina. According to Paltrow "Fans say regular use increases chi, orgasms, vaginal muscle tone, hormonal balance, and feminine energy in general." I'm actually a fan of not having eggs inside of me, so there we go.

Actually she seems to be overly interested in vaginal health.

So much so that she recommended steaming it. Her description does not make it sound more appealing: "It is an energetic release – not just a steam douche – that balances female hormone levels."

She's also got some odd opinions about food.

Like that time she said she would "rather smoke crack than eat cheese from a can."

Or did you remember what she named her daughter?

Apple. She named her kid Apple.

Sometimes it's not even a health product or a weird choice, it's just the way she talks.

Like this gem: “If you move your shoulder and allow yourself to feel the rub of your shirt on your skin, or the brushing of your hair against your neck, those sensations are innately sensual, and pleasure that can be accessed anytime."

And last but absolutely not least...

The time she described divorce as a "conscious uncoupling". Well it's good to know you weren't unconscious at the time.

But we're not here for any of that historical ridiculousness.

No, Ms. Paltrow has given us a new statement to chew on.

And surprisingly this time it might not be totally ridiculous.

In fact, we might agree with her this time.

Paltrow shared recently that she and her husband Brad Falchuk have separate homes.

They spend 4 nights a week together, and the rest in their individual homes.

Where did the idea come from?

While I'm all about having space in a relationship I do have a couple of questions here.

And seeing as Paltrow and Falchuk have only been married for a year...

Should they really be concerned about keeping things fresh at this point?

Of course the basic idea makes tons of sense.

Living with another person is the fastest way to start hating them, so having some space lets you keep some of the romance.

But Paltrow and Falchuk say the move isn't really about them.

It's about their kids.

And honestly, if I were rich and blending my family?

I'd keep the houses separate too.

Sticking two pairs of teens together sounds like a recipe for disaster.

So the plan makes a lot of sense.

While Paltrow dives headfirst into most things.

It appears the teen years of her children have made her a bit more wary.

“With teenage kids, you’ve got to tread lightly. It’s pretty intense, the teenage thing," she said.

If it can scare even Gwyneth Paltrow, I'm definitely terrified of it.

In the most relatable thing Gwyneth Paltrow has ever said, she shared her feelings about being the mom to teenagers.

“Sometimes that piece gets complicated when there are two teenage girls," Paltrow said. “If you’re not all drinking the same Kool-Aid, it can be tough. I do think, though, at the end of the day, everyone wants the same thing, which is to feel love and be accepted."

And in another surprising turn, Paltrow also has a pretty good attitude about being a step-parent.

“My stepson, for example, had a rough beginning with it all, but now he and I have our own space together," Paltrow shared. “I’m not his mother, he’s not my son, but he knows he is very special to me."

This isn't the first odd arrangement that Paltrow and Falchuk have embraced in their marriage.

In fact they've been doing things differently since day one.

It started with their honeymoon.

Not only did they bring the kids, they also brought Paltrow's ex, Chris Martin.

And yes we are talking about THAT Chris Martin.

Of the "conscious uncoupling" fame.

All things considered, it sounds like the Paltrow-Falchuks are being pretty chill about this whole marriage thing.

Families can be formed in all kinds of ways and it's nice to see a celeb couple doing things their own way.

Would you live in a different house from your partner? Maybe have separate bedrooms?

Or are you a traditionalist?

Same house for life! Drop your thoughts in comments.