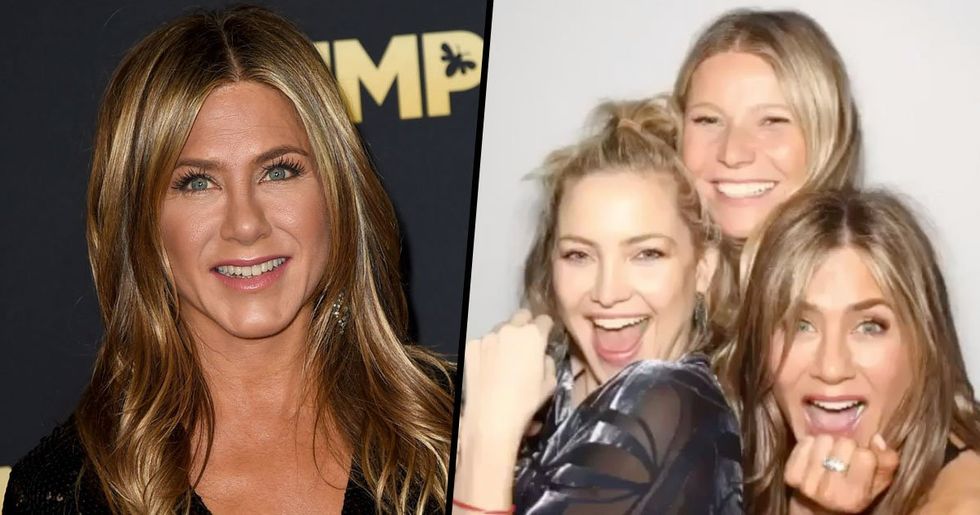 One of the few universal truths about the world is that everyone likes Jennifer Aniston. There's just something about her - some sort of magnetism, if you will - that draws people to her. She's one of the few Hollywood stars beloved as much by men as she is by women, which is no mean feat.

From her breakout role as Rachel Green on iconic sitcom Friends, through all the best romantic comedies of the 2000s, she's always guaranteed to bring a smile to the audience's face. But her personal life has been subject to a few more tribulations than her professional.

On February 11th, Aniston hit a milestone and turned 50 years old - which, for those who still think of her as Rachel, is surprisingly shocking. Her birthday party was as start-studded as you'd expect from one of the world's most famous actresses. Aniston had just one rule for her party - but some of the guests just couldn't resist breaking it.

Jennifer Aniston is an American actress.

She's also a film producer and general businesswoman, with a net worth of over $200 million.

Although she had quite a shaky start in the acting industry, once she found her feet and became established, Aniston became one of the biggest stars in Hollywood.

Aniston really became a family name on the sitcom Friends.

She played the spoilt-brat turned inspiring career-woman Rachel Green, and it's arguably still her best known role to this day.

Also guest-starring in this episode ("The One With The Rumour") was a certain famous heartthrob. Brad Pitt, pictured at the far left, was coupled up with Aniston at the time.

Pitt and Aniston were one of Hollywood's golden couples.

Because if there's one thing Aniston is better known for than her prolific acting career, it's her tumultuous love life.

Alongside Pitt, Aniston has dated a whole host of famous faces.

Here she is with singer John Mayer. The pair dated in 2009, and have remained firm friends.

Aniston has also been married to actor Justin Theroux.

The pair wed in 2015 after a four-year relationship, but divorced in 2017. The press often likes to attach a poor, lonely image to Aniston, likely as a result of her single status.

Which is clearly totally crazy.

Aniston is (still) one of the most sought after, successful and stunning women in Hollywood - and not having a boyfriend is no barrier to that.

It's rare for anyone to have a career so long lasting.

Not least someone who started on a lowly, low budget sitcom. But we're sure Aniston doesn't get concerned with the passive aggressive sympathy.

Because Aniston has got it going on.

Even at the (by Hollywood's standards) ripe old age of fifty, she's still looking amazing.

But Aniston also has something harder to come by.

There's something about her which is just innately likeable. She seems like she'd be the best fun to go out for a drink with.

Just watch this interview to see what we mean.

Aniston just seems hilarious, sweet, relatable and an all around good time, as she jokes with co-star and friend Jason Bateman.

As eagled-eyes readers may have guessed, it was recently Aniston's birthday.

The star turned the big 5-0 on February 11th - so, Happy Birthday, Jen! We're sure she celebrated in signature Aniston style.

Also, not that fifty is old at all, but doesn't she look amazing?

You'd never have guessed that she's just entered her fifth decade - she still looks like a mid-twenties Rachel Green to us!

Although in terms of actress age, fifty is pretty big.

As with the majority of traditional media, women over a certain age have a tendency to disappear. But we're hoping Aniston will be sticking around for years to come. We're confident she will be.

As any fun-loving lady would, Aniston threw a party to celebrate.

After all, it's not every day a woman turns fifty, now, is it? One small problem though - it seems we missed our invitation.

Unsurprisingly, it was a star-studded affair.

And with the birthday girl being worth hundreds of millions, we're guessing the food, drinks and decor weren't too shabby, either.

There were a ton of celebrities in attendance.

Katy Perry, pop superstar, has a close friendship with Aniston, and was one of the lucky ones to make the guest list.

Kate Hudson was also there.

The actress and daughter of Hollywood legend Goldie Hawn is also close with Aniston. She's pictured here on the far right.

There were many celebs to be spotted.

Gywneth Paltrow, actress and ex-wife of Coldplay singer Chris Martin, was there too.

TV host legend, Ellen DeGeneres. The talk-show star is known for being one of Hollywood's kindest and friendliest celebs.

It's safe to say the night was a star studded affair.

Big Little Lies star Reese Witherspoon was also at the fiftieth birthday party. Aniston reportedly also invited exes Brad Pitt and John Mayer, which just goes to show what an all around great woman she really is.

But Aniston did have just one ground rule for guests. The rule? Absolutely no social media.

As one of the world's most famous women, we guess it makes sense.

If your entire life is so public, it's probably a nice novelty to get a bit of privacy - particularly for a special occasion like a birthday party.

But like all rules, it seems this one was meant to be broken.

Because a small number of pics from the bash did make it onto Instagram, including this one from fine jewellery maker Jennifer Meyer.

Even from the few photos, we can tell it was a great night.

Including this set, posted by journalist and TV personality Derek Blasberg. You can see that Aniston's Friends co-star Courtney Cox was among the guests.

Some of the bigger names shared snaps, too.

Including this collage from Gwyneth Paltrow, with the caption "you make 50 LOOK ?". We have to agree with Gwyneth on this one.

She shared three images of herself, Aniston and Paltrow posing, pouting, drinking and laughing - generally looking like they're having the best fun.

Katy Perry left a comment on Hudson's original post, reinforcing the no social media rule of the night. But Hudson nipped any drama in the bud, promising she had had special permission from the birthday girl herself.

It's nice to see Aniston remains at least a little relaxed.

And we think a no social media rule is a great idea for a party! With any luck, it helped guests stop trying to capture the fun they were having, and actually enjoy it. Many happy returns, Jen!