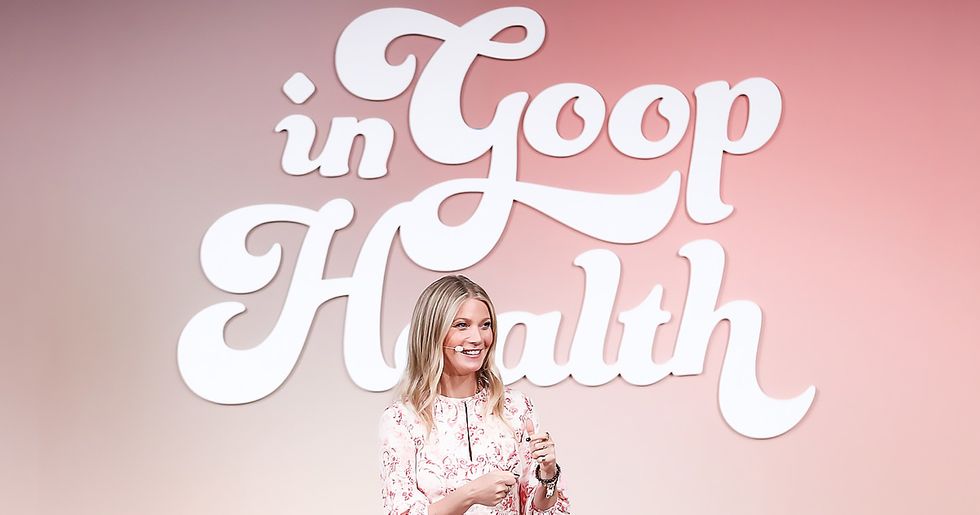 Gwyneth Paltrow's Controversial Goop Is Getting a Netflix Show

Gwyneth Paltrow has made quite a few headlines lately. The list of things the actress-turned-lifestyle guru has drawn ire for is seemingly endless: insisting she made yoga a thing, perpetrating a violent ski-and-run incident, publicly performing what many considered a pretentiously overwrought “conscious uncoupling” from her ex-husband Coldplay frontman Chris Martin – oh, and just over a hundred pieces of dubious health advice advertised through her wellness empire, Goop.

The latest scoop on Goop is that the brand is moving to the small screen, with a Netflix docuseries that is sure to divide fans and critics.

Goop is the newsletter that became an empire.

Launched in 2008, Goop started as a simple weekly email by Paltrow that encouraged readers to "eliminate white foods" and do a number of other rich people things in the name of living their best lives.

The brand has always been widely considered a little pretentious.

While her intentions may be altruistic, much of Paltrow’s wellness advice is pretty out of touch.

Goop is infamous for its controversial health advice.

The website’s wisdom and recommended treatments range from ridiculous to  downright dangerous.

There was the absurdly unrelatable column she wrote for busy moms.

Don’t you hate it when your robot can’t make coffee and you’re late for a fitting with your personal stylist? At least this blog delivered unto the world my all-time fav G.P. quote, “What up, gamers."

“Made of heart-activating rose quartz" designed to deliver positive energy right up your… yoni. Colloquially, that’s “where the sun doesn’t shine."

The encouragement of mugwort steams.

The vaginal cleansing intended to release negative energy and balance hormone levels sounds like a yeast infection waiting to happen.

Don’t worry, Goop has advice for where the sun does shine too.

The company claimed conventional sunscreen was dangerous for expecting mothers, and instead promoted the use of a mineral-based cream (also, please wear sunscreen every day!)

That landed G.P. in a bit of hot water.

And not the good yoni steam kind of hot water, either. The U.K. science organization, Good Thinking Society, found 113 misleading claims on the Goop website.

Some of Goop’s practices have proven fatal.

Last year, a 55-year-old woman died after receiving bee sting acupuncture therapy promoted by the brand as a treatment for arthritis and inflammation.

After a number of Goop’s claims were found suspect, a formal complaint was submitted.

The company was accused of false advertising and was forced to pay out a substantial financial settlement.

G.P. was also forced to hire a fact-checker for the company.

Which she was reportedly not thrilled about.

The deceptive health advice, product recommendations, and ludicrous annual gift guides are basically a joke to everyone earning below the “millionaire" income bracket.

So it comes as no surprise that Paltrow’s latest Goop experiment is being met with some resistance.

The series is intended to reach a wider Goop audience.

G.P.’s team says the company has “bigger stories" to tell, and they want to use the streaming platform to do it. Is binge-watching a form of self-care?

The show will guide viewers into optimal wellness.

Or at least continue disseminating the questionable information around sexual, mental and physical health currently available via Goop.

Goop says it’ll be consulting medical professionals on the show.

Doctors, researchers, and experts will weigh in during the half-hour episodes. Thanks, but Marie Kondo has already made our lives perfect G.P.

The empire is expanding its podcast reach, too.

Sitting down with the notorious billionaire currently getting roasted on Twitter for his ill-conceived presidential bid is probably not the best way to become more relatable to the masses.

Maybe forcing people to listen is?

Ok, that’s not exactly what’s happening. But starting in February the podcast will be streaming on 600 Delta airline planes – and there aren’t that many other entertainment options up in the air.

People are not stoked to see Goop move in on their fav streaming service.

The announcement garnered attention from critics calling out Goop as nothing more than a rich person’s scam, a risk everyone is hyper-aware of with the recent dialogue around Fyre Festival.

Some say G.P.’s tips take advantage of women trying to have it all.

Good to see Gwyneth capitalizing on how our health care system has largely failed women forcing us to invest in the… https://t.co/bYwxgGLHVC
— Joanna Piacenza (@Joanna Piacenza)1549293323.0

A preponderance of “wellness" marketing targets women. While they may promise holistic mental and physical health, many of the products advertised on Goop are simply dressed up versions of the same old useless products that have always leveraged women’s insecurities against them.

Others fear Netflix is being reduced to the next QVC online shopping channel.

Isn’t a series that centers around the promotion of products just like one long infomercial?

People have already suffered as a result of Goop’s unsubstantiated claims.

@Variety @Netflix you really want to be responsible for people’s potential ill health because they wouldn’t be look… https://t.co/PDH7X61AhI
— amandas autopsies (@amandas autopsies)1549300102.0

With a wider audience, there’s an even greater risk.

With a dangerous anti-vaccination movement leading to a resurgence of diseases from a bygone era, people are especially concerned with the consequences of popularizing pseudoscience.

Instead of glittery, celebrity-backed wellnes TV.

Some think a fictionalized Goop TV show is the real billion-dollar idea.

The announcement comes on the heels of news that Netflix is raising prices.

So you canceled American Vandal, for this? Interesting.

Then again, you can always just ignore it.

But how could you not watch a show brought to you by the woman whose annual gift guide casually includes an $8,000 designer surfboard? Stars, they’re just like us…