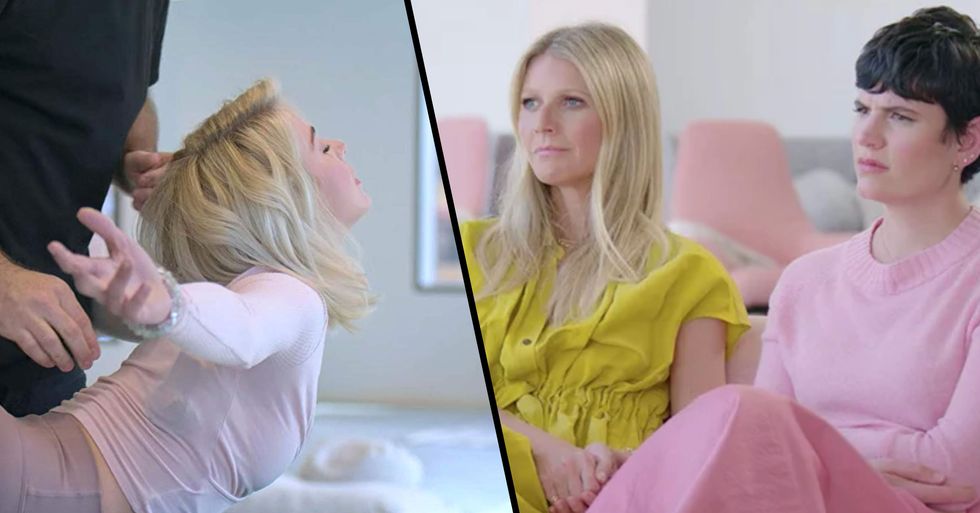 Gwyneth Paltrow's wellness and lifestyle company, Goop, has been mired with controversy ever since its launch - and that appears to have only skyrocketed since it landed its own Netflix show - The Goop Lab.

Now, the UK's National Health Service (NHS) have spoken out about the controversial show, and they've had some quite scary things to say about it.

Keep scrolling to find out why The Goop Lab could pose a "considerable" health risk to the public and how Goop have responded to the backlash.

Gwyneth Paltrow's Goop is the newsletter that became an empire.

Launched in 2008, Goop started as a simple weekly email by Paltrow that encouraged readers to “eliminate white foods" and do a number of other classic rich people things in the name of health.

The brand is said to focus on "holistic health," and be accessible for all.

Given the fact that it's headed by an Oscar-winning millionaire, many have been quite to point out that the brand is reserved for the 1 percent.

The self-described "modern lifestyle brand" also offers a plethora of its own products - including clothing, skincare, books, and jewelry.

The brand recently brought out a candle that whipped up a lot of attention in the media...

You can probably figure out the reasons why for yourself.

Not to mention their eye-wateringly expensive "health summits."

The cheapest pass for the event starts at $1000, with the "plus pass" coming in at a hefty $2,500. What do you get for your money? Well, the itinerary for the popular 2-day events consists mainly of talks, food and drink, classes, so-called "self-care stations," and goody bags, of course.

Goop's eyebrow-raising health advice has landed the brand in some serious hot water over the years.

At one point, after a number of Goop’s claims were found suspect, a formal complaint was submitted back in 2018. Paltrow's empire was forced to pay out a hefty $145,000 to settle the false advertising lawsuit.

The deceptive health advice, product recommendations, and ludicrously expensive annual gift guides have become something of a joke to everyone earning below the “millionaire" income bracket.

But it still has its fans...

The brand still proves very popular with health and wellness moguls - with many taking to Instagram to show off their Goop products.

The empire expanded to podcast reach, too.

But now, it's headed for the small screen.

The show, released on Jan 24, is filmed at the Goop headquarters...

And the docuseries is intended to reach a wider Goop audience.

Reactions before the show hit screens were strong.

Especially given the fact that conversations around non-traditional health practices are very heated right now. Safe to say the show sparked an influx of criticism towards Netflix.

Now, people have had the chance to watch the show.

Each episode focuses on various alternative therapies for mental and physical illnesses.

The show claims to use the backing of real health professionals.

But there's no doubt that some of the advice and methods offered are baffling, to say the least.

And amongst those who have seen the show is NHS chief, Simon Stevens.

And he's certainly not happy.

Mr. Stevens has put the show on blast this week.

Speaking at an event at the Sheldonian Theatre, Oxford, Mr Stevens, the chief executive of NHS England, said that The Goop Lab spreads "misinformation" and pushes "fake news."

He went on to throw some more serious accusations at Paltrow's show. "Fresh from controversies over jade eggs and unusually scented candles, Goop has just popped up with a new TV series, in which Gwyneth Paltrow and her team test vampire facials and back a 'bodyworker' who claims to cure both acute psychological trauma and side effects by simply moving his hands two inches above a customer's body."

He went on to say that the show poses significant risks to public health.

"Gwyneth Paltrow's brand peddles 'psychic vampire repellent'; says 'chemical sunscreen is a bad idea'; and promotes colonic irrigation and DIY coffee enema machines, despite them carrying considerable risks to health and NHS advice clearly stating that there is 'no scientific evidence to suggest there are any health benefits associated with colonic irrigation'."

Following the controversy, Goop have issued a statement.

A spokesperson from Goop told The Independent: "With the editorial and commercial aspects of our business, we sometimes approach different topics from different points of view. On the editorial side, we are transparent when we cover emerging topics that may be unsupported by science or may be in early stages of review," the company stated. "When products are available for retail sale, we have a robust legal and compliance team that works closely with our science and research group to vet product claims. We are proud of our procedures and internal protocols and we are constantly evolving to ensure our approach is best in class." They added: "We applaud the important work that NHS does, and often take our cues from the UK standard. For example, in the case of chemical sunscreens that the NHS cited in their speech, the US bans only 11 personal care ingredients while over 1,000 are banned in the UK. It's for that reason we recommend non-toxic sunscreens." To find out everything coming to Netflix in February, keep scrolling.