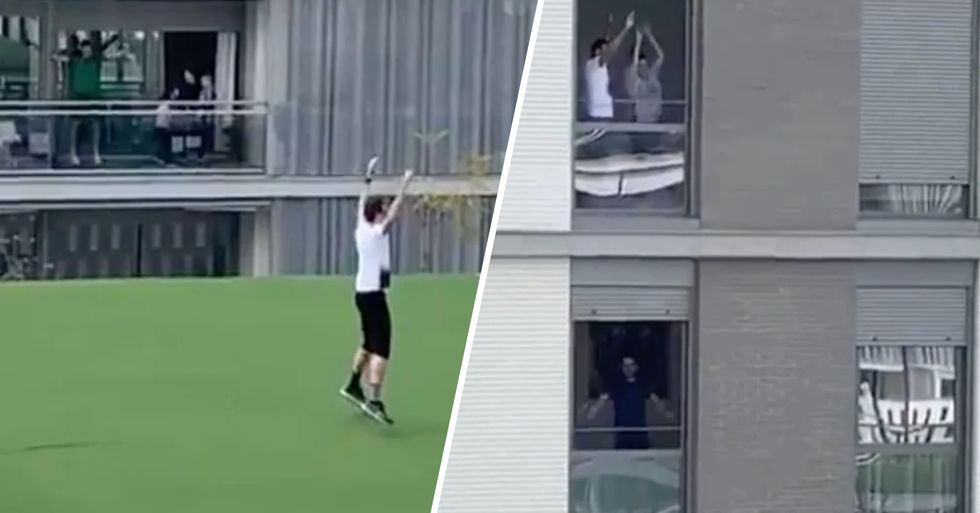 With several areas now going into lockdown, many of us are having self-isolate, go into quarantine or generally "socially distance," which of course, comes with its own set of challenges.

Well, one man in Spain has come up with a brilliant way to make life a little easier for those in isolation...

Since the first COVID-19 patient in Washington, there have been 4,102 more confirmed cases across the country and seventy-one deaths.

With many people self-isolated or "socially distancing" at home...

Many have been struggling to find ways to stay active and social.

Well, it seems residents in one apartment complex in Seville, Spain needn't worry...

Spain has been one of the hardest-hit countries in Europe and has been forced to clamp down to try and contain the virus - meaning everyone is on lockdown.

A video has gone viral this week of a personal trainer from Spain named Gonzalo.

Gonzalo took to the roof of his building to hold a fitness class for all of his fellow residents, who joined in from their balconies. Keep scrolling to watch.

"This is how @gonzalo_gbroto is passing the time with his neighbors. This is the spirit of Sano Sevilla Los Bermejales. Despite such adverse circumstances, we’re going to get the best out of you,"  they wrote.

In the clip, you can hear the person filming laughing...

While panning across the balconies of several people who are joining in on the exercise class.

Dozens of people joined in...

Following along as Gonzalo shouts instructions and words of encouragement to them all.

Luis Javier, a manager at the gym where Gonzalo works, told the Today Show that the residents used a Whatsapp group to organize the class.

“All the neighbors were having a hard time and sad, but now, every day they are looking forward to the time for their training. It is a healthy idea, which helps people feel much better and face the situation in Spain in a positive way," he said.

It's amazing to see people working together like this! The virus has also been having a huge impact on the movie and TV industry. Keep scrolling to check out every film and TV show that has been canceled or delayed due to coronavirus... Is your fave on the list?