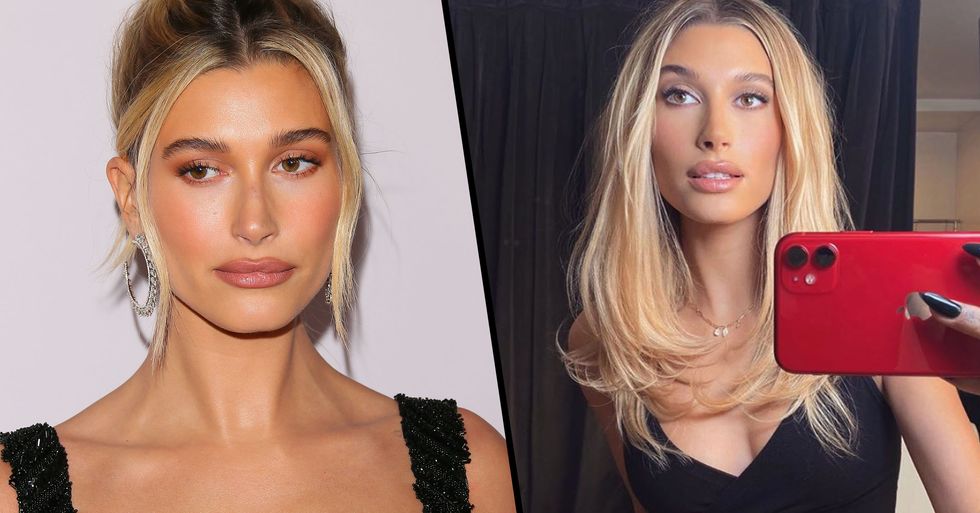 Hailey Bieber is a woman of few flaws - Well, to most of us, she is.

Because the internet is the internet, some people have spotted one major flaw about the supermodel... And it's her little pinky. People have been relentlessly trolling Hailey about her little finger, and she has now been forced to take to Instagram to explain the condition she suffers from, and to beg her fans to leave her alone.

Keep scrolling to see her plea, and to understand more about her unusual condition...

What springs to mind when you think of Hailey Bieber?

Is it her marriage to Justin Bieber? Her uncle, Alec Baldwin? Or is it her stunning, supermodel good looks?

It's probably the last one.

Hailey is one of the most famous models in the world and has featured on the cover of some of the world's most prestigious fashion magazines.

But even these supermodels have their flaws...

Now, to most of us, Hailey Beiber is literally perfect.

The twenty-three-year-old comes from the famous Baldwin family, with her dad being the actor and director, Steve Baldwin, but she is best known for her career as a TV personality and model.

Oh, and the fact that she's married to one of the biggest pop stars in the world.

After knowing each other for over a decade, the couple quietly tied the knot in a New York courthouse back in 2018, and therefore catapulting Hailey to even higher levels of fame.

The couple met back in 2009 when Hailey was just twelve-years-old...

Though love wasn't instantly in the air, the pair were quick to hit it off, and formed a strong friendship.

Though they denied any romance rumors for a long time.

In 2014, Justin shared a black and white selfie with Hailey, where he wrote: "People are crazy. I'm super single and this is my good friend u would know otherwise".

And Hailey confirmed this "friendship" in an interview around the same time.

Speaking to E! News, Hailey explained, "I've known him since I was so young - since I was like thirteen - and we've just been good friends over the years. We have just stayed close and there's nothing more to it than that."

When Hailey was seen vacationing with Justin and his family. Surely meeting the family is the solid confirmation of a relationship?

It must have been.

The pair dated for a while...

But took it slow when it came to putting labels on anything. "We are not an exclusive couple. He's about to go on tour," Hailey told E! News back in 2016. "Relationships at this age are already complicated, but I don't really like to talk about it because it's between me and him."

And, clearly, they weren't exclusive...

Because, for the next couple of years, the pair were seen with different partners on several different occasions, including Sofia Ritchie and Bieber's old Disney flame, Selena Gomez.

Their "friendship" teetered on the edge for 2 years...

As Justin and Selena briefly rekindled their romance.

Justin and Hailey were meant to be together, and fans rejoiced when they reignited their romance in 2018.

The model credits the church for bringing them back together.

And, upon getting back together, Justin was clearly very smitten by Hailey.

And he took to Instagram to gush, "Hailey I am soooo in love with everything about you! So committed to spending my life getting to know every single part of you loving you patiently and kindLY."

And it was here where he confirmed their engagement.

Yep, Biebs had secretly popped the question! The singer excitedly wrote, "The thing I am most excited for is that my little brother and sister get to see another healthy stable marriage and look for the same!!! Gods timing really is literally perfect, we got engaged on the seventh day of the seventh month, the number seven is the number of spiritual perfection..."

They didn't confirm a wedding date...

But, clearly not wanting to waste any more time, the couple quietly got married in a subtle and intimate ceremony at a New York courthouse in September 2018.

And the wedding photos are to die for.

One year after getting married, the Biebers threw a second ceremony, where their star-studded friendship group was able to come and celebrate with the couple.

Did we mention that the supermodel is quite literally perfect?

There's very little that can be faulted about Mrs. Bieber...

But some people have apparently been finding one major flaw.

And it's all about her pinky.

Yes, apparently some people have been staring a little too intently at her pinky finger... I hate the internet sometimes. Anyway, the model was forced to take to Instagram to explain her odd little finger, and to beg her fans to stop trolling her.

In the first of three (now-deleted) Instagram stories, Hailey shared a picture of her left hand...

And her crooked little finger, writing, "I’ve made fun of myself about this forever so I might as well just tell everyone else why they’re so crooked and scary."

She went on to reveal that she suffers from a condition called ectrodactyly.

And that's why her finger is bent in the way it is. As per the Wikipedia definition shared by Hailey on her Instagram Stories, "the hands and feet of people with ectrodactyly (ectrodactyls) are often described as 'claw-like' and may include only the thumb and one finger."

She concluded by politely asking her fans to "stop roasting me about my pinky fingers."

Underneath the screenshot, the model told her followers that she’d had the condition since birth, adding, "so people can stop asking me “wtf is wrong with her pinky fingers" here is what’s wrong! lol." For more on the Biebers, keep scrolling to see never-before-seen photos from their lavish wedding ceremony...
20%

$39.64 $31.71
Buy Now
See More Deals
We hope you find these deals as awesome as we do! Just an FYI: we may receive a share of sales from links on this page