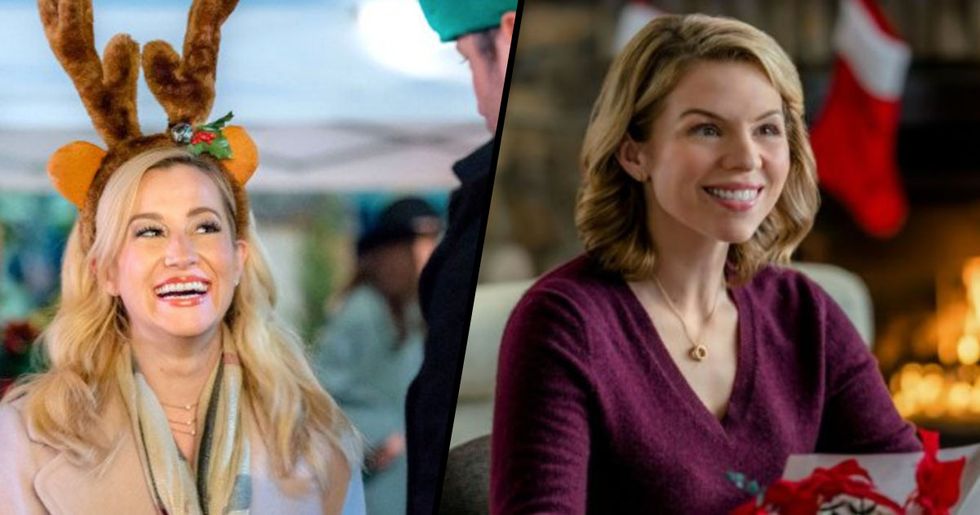 We've waved goodbye to summer (kind of), and now there's one thing on our minds... Christmas.

It may not quite be time to wack out the decorations, but we can definitely justify a Christmas movie here and there. And if you're counting the days until you put up your Christmas tree, have no fear as Hallmark has finally released its highly anticipated "Countdown to Christmas" 2019 movie schedule, and they appear to have gone all out.

This year, which is the tenth anniversary of the network’s hugely popular event, has seen the channel turn their festive content up a notch, with a record-breaking forty movies starring old-favorites like Candace Cameron Bure, Erin Krakow, and even Dolly Parton.

The event will kick off from October 25, with the Hallmark Channel airing twenty-four of the new movies, while Hallmark Movies & Mysteries will air the remaining sixteen titles.

So prepare to sit back, relax, and take in all the holiday goodness as we reveal what's in store in the lead up to Christmas.

Starring Ashley Newbrough and Kyle Dean Massey, the event will kick off with A Merry Christmas Match, which tells the story of Corey who puts on an annual Christmas pageant in honor of her late father, but when a man named Ryder visits her store,  it makes her question whether she should have left town to pursue her dream of becoming a theater director. Premieres: Friday, October 25.

We don't know much in terms of a plot for this festive movie as it's currently filming, however, we do know that the movie will star Hallmark Christmas natives, Brooke D’Orsay and Trevor Donovan. Premieres: Thursday, October 31.

Starring fan-favorite, Jodie Sweetin, Merry & Bright tells the story of Cate, CEO of the Merry & Bright Candy Cane Company. When she meets Gabe (Andrew Walker), she simply assumes that he's someone that her mom is trying to set her up with, but he works for Empire Corporate Recovery, which has been hired to take a closer look at Merry & Bright’s operation. Premieres: Premieres: Saturday, Nov. 2 at 8 p.m.

Things get awkward when Belinda, played by Kim Shaw, is forced to team up with her ex, Dustin (Kevin McGarry), at the town’s annual Christmas scavenger hunt. Premieres: Sunday, Nov. 3 at 8 p.m.

Next up is Holiday for Heroes, which tells the story of a woman named Egan, and a soldier (Blucas) who exchange letters for a year "before their worlds collide." Premieres: Friday, November 8 at 9 p.m.

We all love a good music-themed movie around the festive season, and it looks like A Christmas Duet is giving us a much-needed Christmas music fix. The movie centers on well-loved music duo Averie and Jesse, who are famous for their duet “Wouldn’t Be Christmas." However, they haven’t played together since they went their separate ways years ago - Jesse still tours with little success and Averie gave up music, now owning a lodge in a snowy Vermont town. But fate brings them together just in time for the Yuletide Festival. Premieres: Saturday, Nov. 9 at 8 p.m.

Once again, there's sadly no word on the plot for A Christmas Miracle, but what we do know is that it stars Tamera Mowry-Housley, Brooks Darnell, and Barry Bostwick, so is definitely one to keep an eye out for. Premieres: Thursday, Nov. 14 at 9 p.m.

Double Holiday is currently filming and is set to star Kristoffer Polaha alongside Carly Pope. Premieres: Saturday, Nov. 16 at 8 p.m.

Based on the novel by Barbara Hinske, classic love tale The Christmas Club tells the story of 2 busy strangers, Olivia Bennett (Elizabeth Mitchell) and Edward Taylor (Cameron Mathison), who meet when they help an elderly woman find her lost Christmas savings. Premieres: Saturday, Nov. 17 at 8 p.m.

Starring Merritt Patterson and Jon Cor, Picture a Perfect Christmas follows an extreme sports photographer who returns home for Christmas to look after her grandmother. Premieres: Saturday, Nov. 23 at 8 p.m.

November 24: Christmas at Graceland: Home for the Holidays.

Hallmark channel-favorites Rachel Boston and Wes Brown are set to star in the movie, which is reportedly in production. Premieres: Monday, Nov. 25 at 8 p.m.

The second installment of A Gift To Remeber stars Ali Liebert, Peter Porte, and Tina Lifford. The first movie, which premiered in 2017, told the story of Darcy, who finds romance with a stranger who has amnesia. Premieres: Tuesday, Nov. 26 at 8 p.m.

Fans of To All the Boys I’ve Loved Before are sure to enjoy this festive movie, which centers on recently single Jessica (Torrey DeVitto), who sends Christmas cards to 5 people who have impacted her life: her aunt who raised her, her younger brother in the military, a pop star named Jax (Drew Seeley), the music teacher who inspired her, and her best friend, Mimi. Premieres: Thursday, Nov. 28 at 8 p.m.

November 29: Christmas at the Plaza.

Ryan Paevey is set to star alongside actress, Elizabeth Henstridge, known for her role in Agents of S.H.I.E.L.D in Christmas at the Plaza.  Premieres: Friday, Nov. 29 at 8 p.m.

Christmas in Rome tells the story of American tour guide, Angela, who is fired from her job in Rome just before Christmas. When she crosses paths with an American executive named Oliver (Sam Page), who is keen to buy a flashy Italian ceramics company, he hires her to be his tour guide around the City, as the owner of the company won’t sell it to him until he learns “the heart and soul of Rome." Premieres: Saturday, Nov. 30 at 8 p.m.

Starring familiar face, Candace Cameron Bure, Christmas Town tells the story of Lauren Gabriel who leaves everything behind in Boston to embark on a brand new phase of her life. But, an unexpected detour to the town of Grandon Falls sees her path take an unprecedented, and festive, twist. Premieres: Sunday, Dec. 1 at 8 p.m.

Headlining this year's marquee movie is Kristin Chenoweth, who stars as a youth choir director who finds a talented boy with a spectacular voice, much to the surprise of his widowed father. Premieres: Saturday, Dec. 7 at 8 p.m.

We finally get to see the highly anticipated Dolly-inspired movie this holiday season thanks to Hallmark. The movie chronicles Rachel Lewis (Danica McKellar), a single mom and award-winning Broadway producer who learns investors have mismanaged her latest theatrical — a holiday extravaganza — into bankruptcy, forcing the show to close before it has even had the chance to open. But there's hope when Rachel’s friend calls from Tennessee to tell her about an opportunity to produce a show for the twentieth anniversary of the Smoky Mountain Christmas Festival at Dollywood. Premieres: Sunday, Dec. 8 at 8 p.m.

Sadly, there are no details on the cast or plot for this movie, so it'll have to be left up to the imagination. Although, we anticipate it will definitely involve some kind of love story during the festive season. You can catch it on Sunday, Dec. 15 at 8 p.m.

December 21: It's Beginning to Look a Lot Like Christmas.

Named after the beloved Christmas carol, It's Beginning to Look a Lot Like Christmas stars Eric Mabius in the leading role. Premieres: Saturday, Dec. 21 at 8 p.m.

There's isn't much known about this movie yet other than the fact it stars Brittany Bristow and Matt Cohen, although, if the name is anything to go by, we'll assume that the 2 go on a date during the holidays, maybe? Premieres: Sunday, Dec. 22 at 8 p.m.

December 25: When Calls the Heart Christmas.

When Calls the Heart fans will be thrilled to know that the hit show is getting a movie and it's been giving the top premiere spot... Christmas day. However, Lori Loughlin will be notably absent from the cast after being fired from her Hallmark projects, as well as the Netflix reboot, Fuller House, following the college admissions scandal. Premieres: Wednesday, Dec. 25 at 8 p.m.

Wrapping up the schedule is New Year, New Me, which, unfortunately, is a movie that we don't know a lot about currently, and is still reportedly in the casting process. Premieres: Saturday, Dec. 28 at 8 p.m. With that drawing an end to the festive schedule, it's pretty clear there is one face notably missing from the line-up... Lori Loughlin. The actress, who is a familiar face on the network, has been fired from all of her Hallmark productions following the controversial college admissions scandal, and she could be facing prison time. Keep scrolling to reveal the full scope of the scandal.