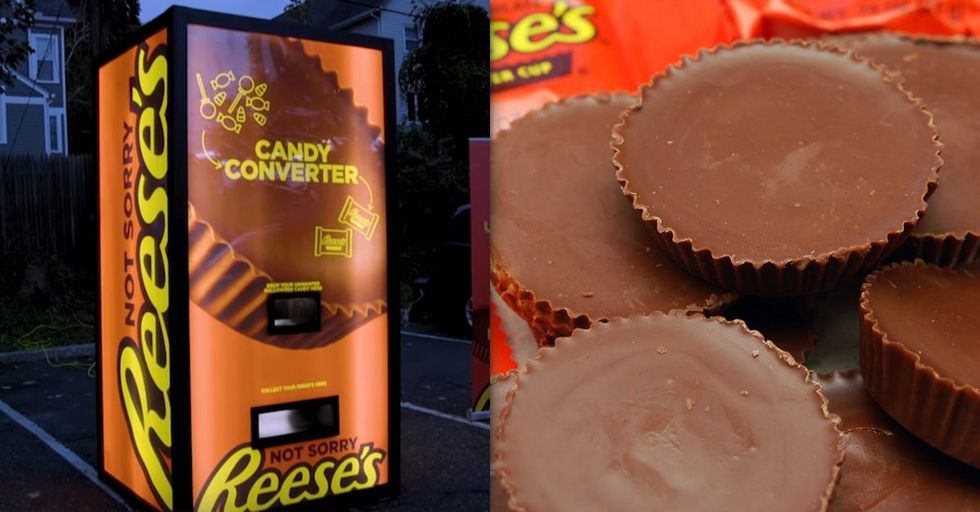 Not all Halloween candy is created equal. We all know the crushing disappointment of getting weird off-brand lollipops, tiny, smushed Tootsie Rolls, or some kind of Butterscotch nonsense. But fret no longer! A new vending machine has popped up in time to solve your Halloween candy woes!

All you have to do is put all your lame candy in, and voila! Reese's Cups emerge!

While we wish this vending machine could populate the entire US, unfortunately it's only in one location.

How did they even get this idea?

Well, according to a Reese's employee:

90 percent of Americans say that they have traded or wish they could have traded their unwanted candy on Halloween. Not only that, but four out of five Americans either have traded or would like to trade candy they didn’t like for a Reese’s Peanut Butter Cup.

But you have to go soon or you might miss it!

The same Reese's employee said, "Reese’s is exchanging up to 10,000 cups." But the exchanging won't last all day. Better go before they run out!

Check out the video below to see the vending machine in action.

We're dying to visit. If you go, take a picture and tag us at @22Words on Instagram or on Facenook at 22 Words!