'Halo' Is Getting Its Own Range of Nerf Guns | 22 Words 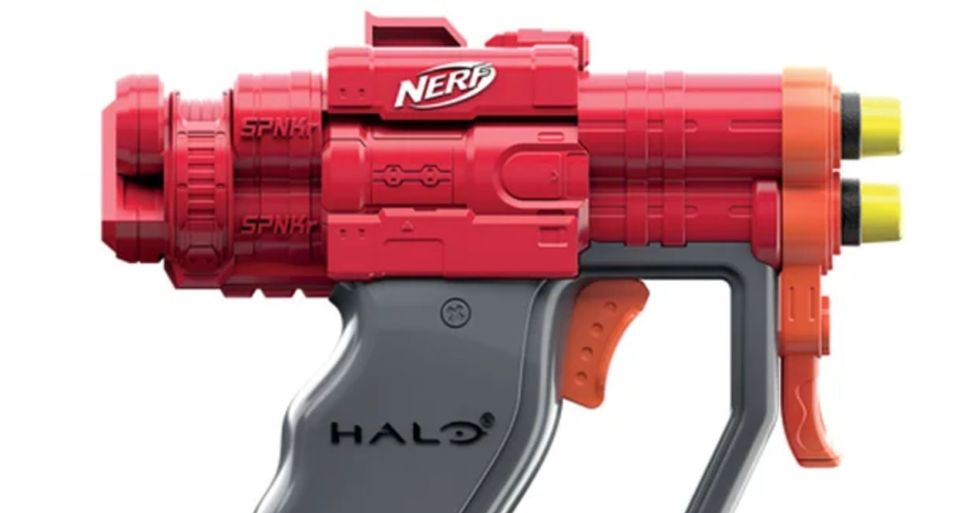 'Halo' Is Getting Its Own Range of Nerf Guns

When it comes to video games, a bunch of fan favorites spring to mind... and Halo is certainly one of them. The video game series has turned into something of an empire, racking up a significant fanbase worldwide.

This week, video game buffs have received some very exciting news. Halo is getting its own range of Nerf guns!

Keep scrolling to get all the details on the new drop, including how/where to buy. Just wait until you see the last one...

When it comes to video games.. there are a handful that truly reign supreme.

And one of those is definitely Halo.

The military science-fiction gaming franchise is one of the most popular out there.

Originally developed by Bungie Studios, the games center on an interstellar war between humanity and an alliance of aliens known as the Covenant.D.

Halo has become one of the most popular gaming franchises in the business.

So much so, that  Halo 2 sold 2.4 million copies ranking in a massive $125 million in the first 24 hours after its release... earning the crown for the highest-grossing entertainment release.

So, it's safe to say the Halo universe has racked up quite a fanbase.

And with any popular franchise comes a heck of a lot of merchandise.

Of course, Halo has been no exception.

There's a whole host of Halo-themed merch out there to feast your eyes on.

From Monopoly to cosplay...

The Halo empire only seems to be expanding.

But there's been some more exciting news for Halo fans this week...

You will soon be able to use the game's infamous weaponry in the real world. Well, kind of.

The team over at Hasbro have released something very exciting...

Halo is getting its own range of Nerf guns! Keep scrolling to get all the details...

Nerf has teamed up with a variety of big-name video game titles in the past...

Including one of the world's most popular games... Fortnite.

But the Halo range is one of its most exciting yet.

The toy company is releasing 3 different blasters, each inspired by the sci-fi game.

Luckily, being Nerf guns and all, the weapons won't have the same petrifying effects as the real ones...

But the range is shaping it to be very cool.

First up is the SPNKR blaster.

The weapon is based on the double-barrel rocket launcher of the same name and is part of Hasbro's Microshots range - the cheaper toys in the line.

Next, we have the Needler.

Also part of the Microshots range, the Needler, which fires one shot and comes with 2 darts. Both the Needler and the SPNKR blaster retail at $10 each.

But the clear highlight of the range is the motorized version of the game's iconic MA40 rifle.

The blaster is inspired by the weapon in the upcoming Halo Infinite and is the premier weapon from the range. It also features a clip that holds 10 darts. This blaster will set you back a heftier $50.

The Nerf Halo collection will be heading to stores from October...

You'll be able to get your hands on your own from October 1st. Want more gaming-related news? Keep scrolling to find out why one Fortnite player has broken down...