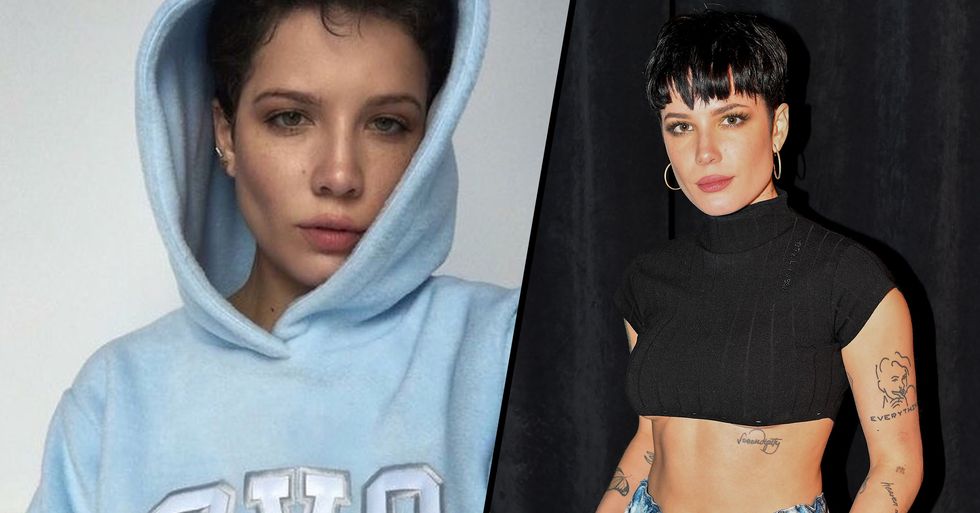 Halsey Called out for 'Disgusting Joke' About 9/11

Halsey is best known for her career as a musician and her quirky and eccentric style.

But recently, she has been known for something not so good.

The singer has been slammed for making a "disgusting joke" about 9/11, so keep scrolling to find out more...

Halsey is an American singer and songwriter.

The singer, whose real name is Ashley Nicolette Frangipane, hails from New Jersey and she broke into the music industry the right way.

She is a college drop-out...

And she spent the first few years of her young adult life living in a basement in Manhattan, and she even considered prostitution to make ends meet.

The singer dabbled in recreational drug use...

Speaking to Rolling Stone back in 2016, the twenty-five-year-old discussed her suicide attempt when she was seventeen and how she has been diagnosed as having bipolar.

She has had a chaotic life so far...

"I grew up in a really chaotic household... There was always s*** being thrown," she explained. "I didn’t like being Ashley Frangipane," she said, “It was a person I thought was weak and silly and sad."

So where did the name Halsey come from?

When she was seventeen and was recovering from her suicide attempt, the singer was dating a man 6 years her senior and he lived on Halsey Street in New York.

Halsey is also an anagram of Ashley...

And thus, the Halsey we all know and love today was born.

So how exactly did she become a singer?

We all know it isn't exactly easy to be noticed as a professional musician, especially when you're living rough with no money.

She started writing music when she was seventeen...

She then began posting videos of herself singing covers on Youtube and Tumblr under the username se7enteenblack.

It wasn't until 2014 when she met somebody at a party who had a recording studio...

This was when she wrote Ghost, and after uploading it to Soundcloud, she woke up the next day to messages from 5 different recording labels.

After touring with The Kooks and performing several original songs, Halsey released her debut Room 93 that immediately made it into the US Billboard 200. Her debut album "Badlands" came in 2015 and after it was certified platinum along with 4 of its singles, she has continued to rise to fame over the years after producing more music and collaborating with other artists such as The Chainsmokers.

That the singer is doing pretty well for herself right now.

And not only is she loved for her music...

She is also very much loved for her quirky style and attitude.

She is a very active figure on social media...

And she is known for being honest and outspoken, but she has said something recently that has landed her in hot waters.

But sadly, it didn't get the amazing reviews that Halsey had hoped for.

Pitchfork released a savage review of the album...

They branded the album as "tedious" and they referred to it as "amorphous pop that you might associate with a miserable Lyft ride." Ouch.

Halsey decided to brutally tweet about the company out of frustration...

Writing in the tweet that has now been deleted, she said, "Can the basement that they run Pitchfork out of just collapse already."

But for those who weren't aware...

Pitchfork's headquarters are based out of One World Trade Center in New York City - the skyscraper that was built after the twin towers collapsed during 9/11.

Many people have seen Halsey's comment as a "disgusting joke" toward 9/11.

losing my mind thinking about the person on halsey’s team who had to tell her she just called for the collapse of o… https://t.co/RSTytQplP2
— Ben Kesslen (@Ben Kesslen)1579796637.0

But it's clear that the singer has no idea that Pitchfork are based in the Trade Center, and this is all a big misunderstanding.

Halsey took matters into her own hands...

"ABSOLUTELY deleted it upon realizing this," she wrote in response.

"Was just trying to make a joke! Intended zero harm... Just figured I could poke at them back with the same aloof passive aggression they poke at artists with! Clearly a misunderstanding."

It seems that Halsey has learned a valuable lesson...

And that's not to joke about buildings collapsing! Keep scrolling to find out the tea about her relationship with Evan Peters...