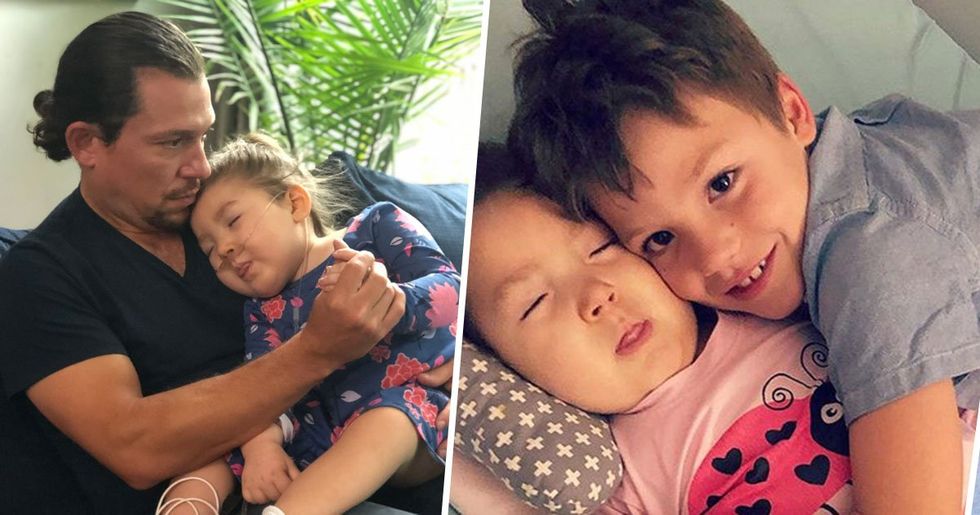 Preparing a young child for the incomprehensible journey of grief is no easy task. But for Kelly Cervantes and her Hamilton-star husband, Miguel, they had no choice.

The couple's three-year-old daughter, Adelaide, was born with a rare form of epilepsy. Since day one, Adelaide's life hung in the balance as the family fought to find a cure. Sadly, after three years of fighting, the toddler was put into a hospice, her days numbered. Kelly and Miguel did not only have to prepare themselves for the tragic loss, but they also had to prepare their firstborn, seven-year-old Jackson.

Jackson had been by his little sister's side every step of the way as she battled this rare form of epilepsy. The news that Adelaide was not long for this world would not be easy for young Jackson. His mom documented what happened in the final post of her blog, Inchstones.

The blog became a lifeline for Kelly, giving her a place to log her thoughts and feelings as well as raise awareness about the condition.

It truly is heartbreaking how well Jackson took the news and how much support the little one has provided his wonderful parents...

2016 was a life-changing year for the Cervantes family.

It was the year that Miguel was offered the starring role in Hamilton: The Musical, a part that would define his career and which he has now played a staggering 950+ times. It was also the year that the couple's seven-month-old daughter, Adelaide, was diagnosed with epilepsy.

This is a rare form of childhood epilepsy and, as Kelly put it in her blog, the science just wasn't there yet to save Adelaide. The resilient mom wrote: "there is little we can do to definitively improve Adelaide’s condition: we are waiting for science to catch up to her."

The whole family pitched in to raise awareness about the condition.

Kelly left her job to become Adelaide's full-time carer. As well as looking after her daughter and monitoring her condition, Kelly became a board member for CURE (Citizens United for Research in Epilepsy) and worked to fundraise and spread awareness for the condition.

Kelly found solace in connecting with other families going through something similar.

Through her advocacy as a board member for CURE, Kelly met lots of people who faced similar challenges within their own families. This sense of community that she found bolstered her to keep fighting.

The actor went on various talk shows, radio shows, and gave interviews to raise awareness about epilepsy. As much as Miguel's career is important to him, he made it very clear that family comes first.

Jackson was never kept in the dark about his little sister's condition.

Her big brother was by her side every step of the way.

Kelly documented the experience of caring for a child with infantile spasms through her blog, describing her daily routine of physical therapy, a visit from Adelaide's palliative care team, and then an oxygen tank delivery.

Kelly revealed that, as her daughter's condition worsened, she became scared to leave the house.

The destabilizing worry that her daughter's condition would worsen left her not wanting to go outside. In her blog, she explained the decision to have all of Adelaide's treatments at home: "As Adelaide has grown more and more unstable, extended drives in the car no longer feel safe. At this point, we only utilize services that can be offered in our home since the less transport the better, both for her health and my sanity."

With Miguel busy touring with Hamilton, Kelly was often alone with the kids.

The extent of attention that Adelaide required due to her condition left Kelly worried about Jackson. Being the sibling of a child with special needs can be very challenging. Miguel and Kelly decided to put their son in therapy to ensure that he was being heard.

"I've accepted that I can't change Adelaide's future but I can make sure that Jackson has the best opportunity to emotionally navigate his."

Kelly revealed that Jackson has been seeing a therapist for over a year and has stated that she would encourage other parents in a similar situation to do the same. According to Kelly, the "healthy" sibling in a family that has a child with special needs can be prone to bottling up their feelings, not wanting to put more stress on their parents.

"In an unnecessary role-reversal, the child tries to protect the parent."

Kelly warns that children like Jackson are likely to hide their feelings and try and remain "strong" in an effort to protect their parents from more pain. Through therapy, Jackson has been able to open up, and although Kelly wishes he would be more honest about his feelings with her, she understands that "the most important thing is that he’s talking."

It's difficult for adults to process grief...

But the weight of grief being on the shoulders of a little boy is even harder to comprehend.

Kelly decided to make a memory box for Jackson.

In a bid to help her little boy process the imminent loss of his sister, Kelly decided to make him a memory box. She filled it with pictures of Adelaide and Jackson, children's books dealing with grief, and a plaster cast of the siblings holding hands.

When Adelaide was moved to the hospice, they knew it was time to talk to Jackson.

Although Jackson knew that his little sister was very sick, his parents were yet to tell him that her condition had become terminal. Once Adelaide was moved into a hospice, Kelly and Miguel knew that she may only have a matter of months left to live.

"It felt awful to have to share this dark cloud with him..."

Kelly detailed how, through tears, she and Miguel sat Jackson down to explain what was going to happen. They told him that his little sister would not grow up to be a big kid, and that her brain was very sick and that no doctors could help.

Kelly believes that the memory box has helped Jackson process.

She made the decision not to share his reaction to finding out about his sister's terminal condition. On her blog, she writes that Jackson has since expressed that he wishes to grieve privately because his feelings are his “private information."

Kelly was impressed by how well Jackson processed the information. She revealed that he began collecting memories for his box and would occasionally ask questions, which made his mom know that he understood what was happening. In her blog, Kelly attempts to describe what it's like to witness a child processing grief. She wrote: "It’s sort of shocking to hear a child working through such complex emotions and in such a healthy and mature way. Then 2 minutes later he’s making fart noises and telling me about some crazy thing he saw on YouTube."

"Finally, she is free from pain."

As heartbroken as the Cervantes family is to have lost their little girl, they have found solace in the fact that Adelaide is no longer in pain. The last three years battling her condition had been grueling for the little girl, and no one knows that more than her dear family.

"I promise you, my angel baby, that your efforts, your fight, your life will not have been in vain."

In a heartfelt blog post titled "Dear Adelaide," Kelly writes a letter to her little girl whilst processing the news that her condition had become terminal. We can only imagine how difficult something like that would be to write. Kelly's strength and resilience shine through. At the end of the post, Kelly writes: "Our loss will shatter me in ways I never thought possible but you’ve provided us with everything we need to heal. When it’s time sweet girl, we’ll be with you, and forever after."

The family has received an outpouring of well-wishes on Twitter.

@MiggstaC09 @KellyGC411 You and Kelly handled this entire tragedy with nothing but class and dignity. The world has… https://t.co/dTHKavvMkz
— Eric Burgess (@Eric Burgess)1571065635.0

Both Kelly and Miguel have been incredibly generous, sharing their stories and keeping the world updated with their daughter's progress. On the news of her death, thousands of fans shared their messages of condolence and support.

Many were impressed at Miguel's resilience.

@MiggstaC09 @KellyGC411 Saw you perform in Chicago the day your daughter entered hospice. You are amazing! God bless all of you
— Erin Fallis (@Erin Fallis)1571069364.0

Not one to let the Hamilton team down, Miguel continued to perform night after night as his daughter's condition worsened. The phrase "the show must go on" was certainly something that Miguel took to heart.

Dear everyone. Just wanted you to know that @KellyGC411, Jackson and I are doing ok. We are comforted knowing th… https://t.co/9uujFCE8jO
— Miguel Cervantes (@Miguel Cervantes)1571063630.0

The actor let everyone know that his family is doing okay. He also detailed that they are planning on celebrating their daughter's short life and her legacy very soon. If you have been affected by this story and would like to donate to CURE (Citizens United for Research in Epilepsy), you can do so here. In lighter news, continue scrolling to read about the mini-cars that hospitals are giving kids to ease their anxiety when going into surgery.