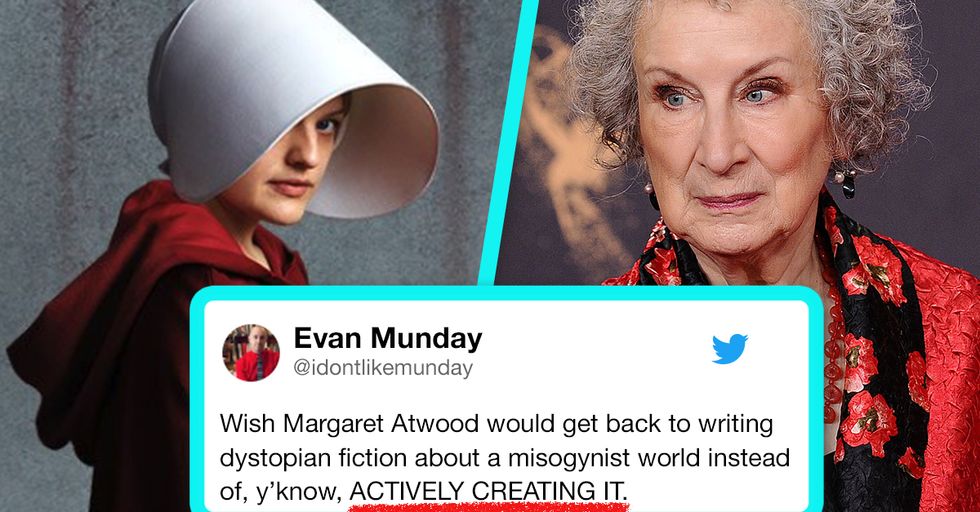 The Handmaid's Tale is a book and a television show about the dangers of uber-patriarchal societies. Margaret Atwood wrote the novel in 1985, and it immediately entered the literary canon as a seminal work of speculative feminist fiction. Yet the debate has raged on as to whether The Handmaid's Tale classifies as a fully feminist novel, and the discussion was aroused once again when it was adapted into a TV series for Hulu in 2017.

In her prolific body of work, Margaret Atwood often explores the subjugation of women by men, yet she has consistently balked at being labeled a feminist writer. In The New York Times, she wrote, "First, is The Handmaid’s Tale a 'feminist' novel? If you mean an ideological tract in which all women are angels and/or so victimized they are incapable of moral choice, no. If you mean a novel in which women are human beings — with all the variety of character and behavior that implies — and are also interesting and important, and what happens to them is crucial to the theme, structure, and plot of the book, then yes. In that sense, many books are 'feminist.'"

While to you and me, portraying women "with all the variety of character" that it means to be a human being is obviously a huge part of what makes a work feminist, Atwood comes from a generation that has defined feminism differently throughout the years. And she has now used her outdated and old-fashioned perceptions of feminism in a more unfortunate way — to disparage the #MeToo movement and question the motives of all the brave women who have come forward to share their experiences of sexual harassment and assault.

On Saturday, January 13, Margaret Atwood published an essay on The Globe and Mail called, "Am I a Bad Feminist?"

In it, she lists all the reasons she's been called a "Bad Feminist" over the years. Then, she launches into a list of things she believes women are (human beings) and are not (angels, "children, incapable of agency or of making moral decisions" — no one is suggesting this). After, she discusses her signing of the UBC Accountable letter. The letter, written in 2015, addressed the suspension of University of British Columbia professor Steven Galloway following allegations of sexual misconduct. It defended Galloway from the "unsubstantiated and unexamined" allegations (which were not made public) and claimed that his reputation and health had been severely affected. Margaret Atwood signed the letter and defended a man accused of sexual misconduct. She called it a witch hunt. In her new essay, she tries to explain away her participation in the letter and her subsequent comments by saying that because "Good Feminists" believed the student making the accusations instead of the male teacher, "they are just feeding into the very old narrative that holds women to be incapable of fairness or of considered judgment."
That's not true at all, however. Believing the victim, who had to defy the structures of authority that kept her powerless and risk her reputation, is part of a new, modern narrative, and a simple one at that: Believe women. The percentage of allegations of sexual assaults that turn out to be false? Between 2 and 10 percent. Get with the times and the statistics, Margaret Atwood.

"The #MeToo movement is a symptom of a broken legal system," Atwood writes. "All too frequently, women and other sexual-abuse complainants couldn't get a fair hearing through institutions...so they used a new took: the internet... This has been very effective, and has been seen as a massive wake-up call. But what next? ... If the legal system is bypassed because it is seen as ineffectual, what will take its place? ... In times of extremes, extremists win."
Yes, the legal system may be broken, but the solution, Ms. Atwood, is not to silence the women who've used the Internet to come forward. It is not to call them "extremists." It is to believe them and to use your powerful voice to fight to help fix the systems that are so broken.

Understandably, many of Margaret Atwood's readers and fans are more than disappointed by her defensive and misguided piece.

This is the author of The Handmaid's Tale. The inventor of Gilead. Offred's champion. Unfortunately, Atwood's attitude isn't too uncommon among older women...

But first, the term "Bad Feminist," while not invented by Roxane Gay, was popularized by the writer in her essay collection titled Bad Feminist.

Atwood has been accused of White Feminism before. Characters of color in The Handmaid's Tale are all but removed from the narrative, separated and relegated to a place called "National Homeland One." Atwood coopting the phrase from Gay with no attribution whatsoever is just another way in which she has diminished the experiences of women of color.

Margaret Atwood's essay is of a brand of thought put forth by several older women in the public sphere.

A couple months ago, Angela Lansbury came under fire for her victim-blaming comments about sexual assault. She basically said that it's the fault of women if they get assaulted or raped because they try to make themselves look too attractive.

In it, they defended men's "freedom to pester" women as "indispensable to sexual freedom," and they believe that the recent wave of allegations is the result of a "hatred of men and sexuality." Could they be more wrong?

It is beyond time for older women who grew up in a time when the definition of feminism changed and morphed to learn that there is a new definition of the word.

It is not about "man-hating" or destroying the male ego or valuing women above men. It is about finally demanding equality, dismantling the systems that work to keep women oppressed, and recognizing that women are just as worthy as men of the life, liberty, and pursuit of happiness that the Declaration of Independence promises all men.

Atwood concludes her essay with this:

"This is a very important moment," she wrote. "I hope it will not be squandered." Maybe if you don't like wars among women, you should stop creating them, Margaret!!! Feminism is not the blind support of every woman even if they say a bunch of dumb stuff. Feminism is why I wrote this critique. I hope Ms. Atwood learns to listen.