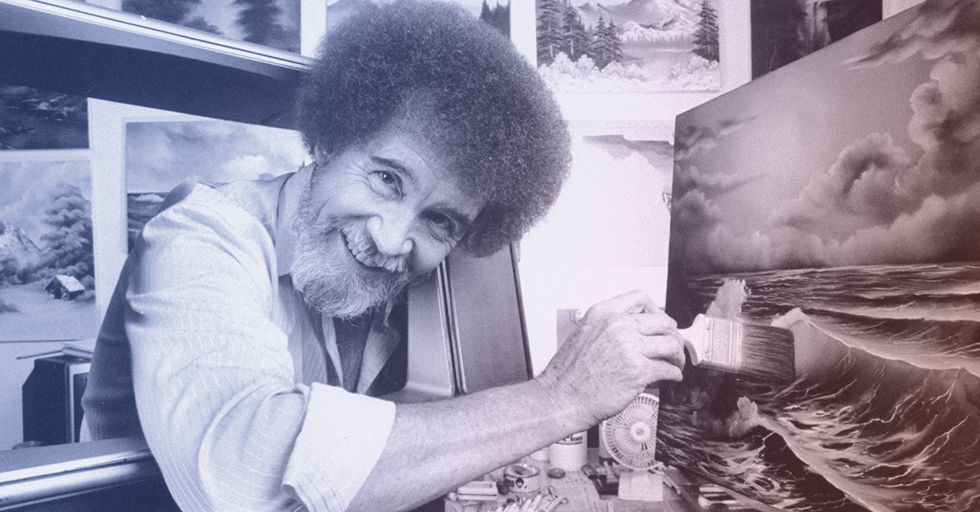 If you grew up watching PBS, then you're definitely familiar with Bob Ross.

A poofy-haired painter with a heart of gold, Bob Ross taught us all how to paint happy little trees and majestic mountains. But more than that, he taught us that anyone is capable of creating something to be proud of. And if anyone tells you otherwise, well, you have Bob's permission to "beat the devil" out of them.

1. He was missing part of his left index finger.

After dropping out of school in the ninth grade, Bob Ross starting working as a carpenter with his father.
He lost a bit of his left index finger in a carpentry accident. You probably didn't notice it because he used his left hand to hold his palette on The Joy of Painting.

2. He learned his signature "wet-on-wet" technique from another TV show artist.

Ross was working as a part-time bartender in Alaska when he became interested in painting by watching a show called The Magic of Oil Painting, hosted by a German painter named Bill Alexander. Alexander used the "Alla Prima" method (Italian for "first attempt"), also known as "wet-on-wet." The technique is a great way to create a lot of paintings in a short amount of time. Ross would paint this insides of gold panning tins on his lunch break. "I used to go home at lunch and do a couple while I had my sandwich," he once said during an interview. "I'd take them back that afternoon and sell them."

3. One episode of The Joy of Painting featured a grayscale painting for a really awesome reason.

Ross said that a fan had written in saying that, since they were colorblind, they doubted they'd be able to paint along with Bob Ross. In response to this colorblind fan, Ross created a painting entirely in grayscale, proving that you don't need to be able to distinguish between every single color in order to create an amazing work of art.

4. The paintings featured on The Joy of Painting weren't done spontaneously.

In fact, Ross would first do each painting off-camera and refer to it throughout the taping of his show. Actually, he did each painting three times...

5. Ross painted each piece featured on The Joy of Painting a total of three times.

The first one was the reference painting that he hid off-camera. The second was the painting completed during the taping. And the third he did for his instructional book. In case you're doing the math...

5. Ross did a lot of paintings.

6. He donated his paintings to PBS stations.

Tour your local PBS station and you just might find an original Bob Ross creation. After his death in 1995, some paintings were sold. One even brought in $2 million!

You're right! It is! In fact, 91 percent of the paintings Ross created for The Joy of Painting include at least one "happy little tree."
39 percent featured a mountain of some sort, while a mere 2 percent featured a bridge. 403 episodes sure is a lot. You might think he made quite a chunk of change from the show. But you'd be wrong!

9. Ross didn't make any money from the TV show itself.

"This is PBS," he said. "All these shows are done for free.'' Instead, Ross' income came from his art supply store where he sold branded how-to books, videotapes, and a variety of art supplies. (Including, of course, Titanium White paint.)

While in the Air Force, he rose to the rank of Master Sargeant. ''I was the guy who makes you scrub the latrine, the guy who makes you make your bed, the guy who screams at you for being late to work,'' he said.
'The job requires you to be a mean, tough person. And I was fed up with it. I promised myself that if I ever got away from it, it wasn't going to be that way anymore.'' And so, when he retired from the military in 1981, he vowed never to scream again. Instead, he taught people how to paint using a calm voice and constantly positive attitude.

11. He received a lot of fan letters.

Up to 200 of them per day! And whenever he hadn't heard from one of his regular letter writers for a while, Ross would give them a call on the phone to check up on them.

After a dubbed version of his show started airing twice a day in Japan, a dedicated following sprung up. Upon visiting Japan, Ross was mobbed by huge crowds of fans. Now, about that afro...

He got his first perm as a cost-cutting measure after his crew cuts became too expensive to maintain. After a while, he actually got sick of the hairstyle. However, he realized it had become such a quintessential part of his look that he kept it until the end of his life.

14. He had a number of pet squirrels.

And several of them made appearances on his show! Actually, Ross was quite fascinated with wildlife.
He had plans in 1991 to create a children's show called Bob's World, which would have featured him talking to children about animals like foxes, deer, and squirrels. Alas, this wonderful idea for a television show never came to be.

In 1987, Ross was invited on-stage at the Grand Ole Opry by musician Hank Snow, where he received a standing ovation from the crowd. After the show, Ross gave Snow a private painting lesson.

16. There was almost a Bob Ross video game.

It was going to be for the Wii but it was canceled before it went into production. However, there is a Bob Ross board game!