Happy Little Images That Made the Whole Internet Smile | 22 Words 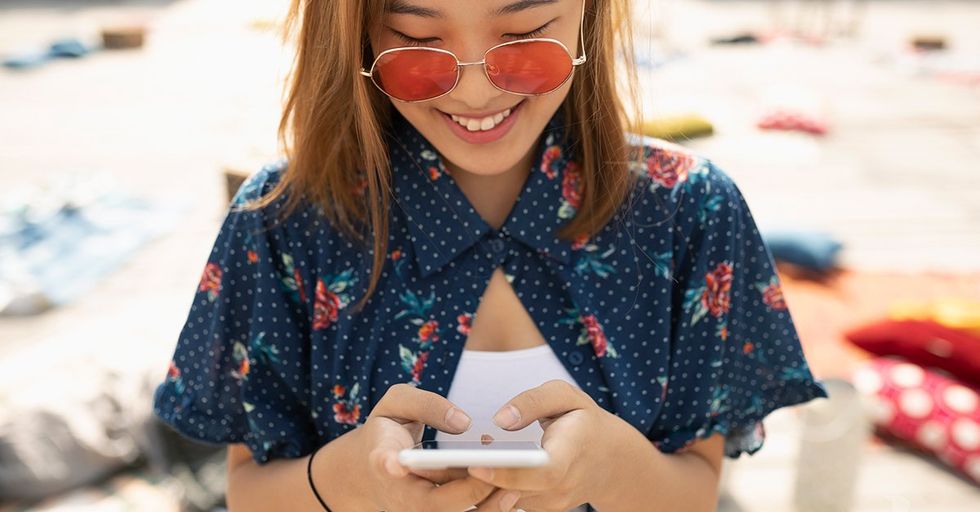 Happy Little Images That Made the Whole Internet Smile

We're used to an internet full of jerks, creeps, monsters, and trolls — the type of people who use the internet as a place to hide their identity and be as vicious and cruel to other people as they can be. Most of these people are working out their own issues anonymously online, but that doesn't make it feel any better if you're the one being accosted in a comments section.

That's why it feels like a giant weight being lifted off our shoulders when someone on the internet decides to be nice for a change. Sometimes, we get to log on and find a post or a blog that brings a smile to our face! And on those days, we have to celebrate.

That's why we're collecting some happy little images from Reddit's /r/MadeMeSmile, a subreddit for the random acts of kindness or sweetness that can make anyone smile. Consider bookmarking it for those days when the trolls get you down.

Becoming my own superhero my recovery from anorexia. - andrewg06

Work hard and you can get whatever you dream of getting.

Gabriel Nobre, 19, with his mom and sister right after he found out he’d passed Brazil’s famously difficult university entrance exam. The young man had cut a deal with a prep course to clean the building in exchange for free classes to help him prepare for the exam. - ThatDIYCouple

This is wonderful news.

If anyone would like 2018 to include some good news, here it is... my 6-year-old daughter, who woke up paralyzed from the waist down at eight months old, who did many rounds of chemo, beat cancer, and regained the use of her legs — has her first dance recital tomorrow. - @mrfulton81

There is literally no limits to what humanity can achieve.

Katie Bouman who led the development of the algorithm which made it possible to capture the image of a black hole, and the moment when the first black hole image was processed. - ledgendary

Some bartenders are the realest.

I usually have a beer or two after work at the bar next door, and for my birthday the staff each got me a small novelty present and they all signed a card for me. I don't have a lot of friends, this mattered a lot to me. - infinite-tonkotsu

The holidays are for family, no matter the cost.

I had the pleasure of sitting next to Hal on my flight back home. His daughter Pierce was our flight attendant who had to work over Christmas. Hal decided he would spend the holiday with her. So, he is flying on each of her flights today and tomorrow around the country to spend time with his daughter for Christmas. - eemancmannerb

How can you not love this?

My little brother has autism. He turned 17 today. I came home from work to this note. - -TheOnlyOutlier-

This is so thoughtful.

My sister has been in this world for 18 years and today is the first time she has been offered a menu at a restaurant. - angelaazhao

This first date, filmed for a reality show, is touching. Look at the acceptance and love emanating from this guy when she sits back down without her wig.

Grandparent love is quite possibly the purest kind of love.

This is the last note my grandfather left my grandma before he died. He attached it to his will because he knew that'd the only time she would find it. - CorrCpu

Deaf man finds out he's going to be a dad. - Two_Inches_Of_Fun

In my defense, I am very rich and got turnt up for "Piano Man."

Billy Joel never sells tickets to the front row of his concerts. Aside from wanting to beat the scalpers, he got tired of all the bored, rich people staring up at him — so now, he sends his road crew out to bring down the fans from the worst seats so there'll be "people in the front row that are really happy to be there, real fans." - peacelovehap

It's the things they do when no one's watching that prove how much they care.

When I was eight years old I found a four leaf clover and gave it to my Pop for good luck. When he died I found out he always kept it in his wallet (for 20 years). - STEELSTRING88

Rad people are always ready to root for their fellow rad people.

This lady's excitement over seeing a skateboarding trick. - RyanReynoldsWrap

Pupper took the hit for his mans.

This is Todd, Todd is the best pupper. Todd saw his owner almost get bitten by a snake and intervened. 27/10 would give all the pets. Todd is making a speedy recover, well wishes for Todd. - GallowBoob

Carrying on the tradition.

My mum always made me a birthday cake. Every year for 44 years. Two months since she died and my old dad tried his hardest and my heart melted. - radowanhabib

They tried to stay awake!

My parents just stayed with me for a week. They attempted to stay up until 11pm to welcome me home after a long shift. - Hellhound0nMyTrail

He wore it to work.

I made this tie for my dad when I was in 1st grade. 11 years later he wears it to my graduation. - Sumit316

Wait a minute... have we ever seen Barack Obama and The Pope in the same room...?

Having a bad day? Just remember that time Obama lost it when he saw a baby dressed as the pope. - BanAllPineapples

Full disclosure: I would've taken the money and put it towards a new Playstation.

These kids returning a wallet they found. - Glumbot_2

Aww, they're gonna be best friends.

This must mean the otter trusts him.

My boyfriend's reaction when the otter let him rub her belly. - kingqueefsalot

And this young boy grew up to be... Tiger Woods.

Kid just wanted a high-five from his golf idol. - monkeyeatingeagle

I have saved significantly fewer lives.

James Harrison, 81, making his last blood donation on Friday in Sydney, Australia. His blood contains a rare antibody used in a medication that officials say has helped save the lives of more than two million babies. - Waffle_Man_

I want to put him in my backpack and go have adventures in the wilderness.

I saw an adult German Shepard that's diagnosed with dwarfism today and it's the cutest thing I saw all year. - Goal1

They say you should never meet your heroes. They're wrong.

That time your dad takes you to a Metallica concert and your favorite band member notices you. - God_is_Goood

Toss in a buck if you've got it.

What a perfect twist to the street musician! It's easy to forget that a person can play guitar in public wherever they want and use that money to give to charity. I always assume they're just using it to buy new strings and picks.

My daughter, the day she was born and placed on brain cooling treatment with an uncertain future and an Apgar of one. And then yesterday, 15 months later, when the Neurologist told us he didn’t need to see her anymore. - Stepsdad0130

This is Caleb. Caleb has a degree in zoology and asks his customers what their favorite animal is. He gives them facts while completing their orders! - JendolsWRGaming