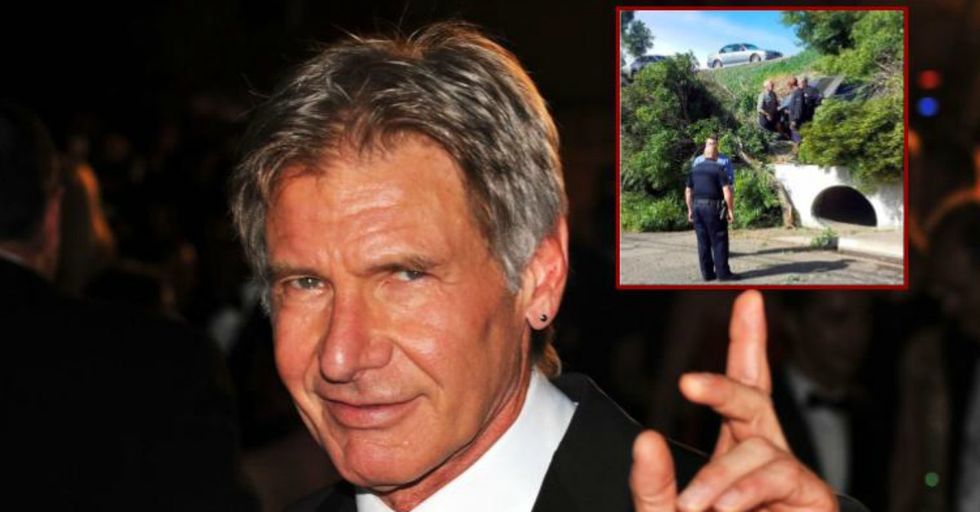 We all know Harrison Ford is a hero onscreen – (Indiana Jones or Han Solo, anyone?) – but did you know he's a hero in real life too? The actor had a chance to put his hero chops on full display this week, and what he did has people cheering with happiness and relief (that he didn't, you know, molest someone).

When Twitter insta-haters thinking they gonna come at Harrison Ford because he did something immoral to a woman...… https://t.co/D9hO70FqIE
— Young Black Gif'd (@Young Black Gif'd)1511176102.0

Well, good guys who skirt the edge, like the titular character in Indiana Jones or Han Solo from Star Wars. With a few notable exceptions (Dr. Norman Spencer of What Lies Beneath – remember that?) Ford is almost always the good guy.

He's also known for his handiness and his snarky one-liners.

In his movies, Ford is almost always an ace pilot with some sort of specialized knowledge – oh, and he usually knows how to fight down and dirty too and can out-snark the snarkiest of them all.

So basically, Ford is the man in his movies... but did you know he's also kick-ass in real life?

Just like his characters, Ford is an ace pilot who flies both helicopters and planes. In fact, the actor once crashed a vintage two-seater airplane into a golf course due to engine failure. He sustained numerous injuries in the process but likely saved lives by not trying to return to the airport once he discovered the defect. A new meaning to taking one for the team...

While the plane crash happened in 2015, Ford has also been pretty damn heroic this year.

Just this September, he jumped in to direct traffic when cars got backed up in the Midtown Tunnel. He did a good job of it too.

The star was driving with a friend in Santa Paula, an area north of Los Angeles, when they heard a strange sound. It was the sound of a car accident.

A woman had careened off the road into an embankment.

According to the California Highway Patrol (CHP), the unnamed 63-year-old was driving when her car veered left towards the embankment. When she tried to brake, she lost control of the vehicle.

That was when Ford and some other bystanders stepped in.

They rushed to the woman and helped her out of the car.  As a local police officer, Matt Alonzo stated, "He acted as a good Samaritan, just like everybody else, and tried to help before emergency services arrived."

Ford reportedly made sure the woman was okay before leaving the scene.

Sadly, he didn't provide any statements or answer any questions. The woman reportedly left her close scrape with minor injuries.

But this isn't the first dramatic rescue Ford has enacted.

In 2000, Ford saved a stranded hiker in Idaho Falls using his helicopter. He did the same for a 13-year-old Boy Scout lost in Yellowstone National Park.

As he saved the boy, he reportedly told him the most Harrison-Ford-like one-liner ever.

“Boy, you sure must have earned a merit badge for this one," Ford reportedly quipped. Never stop being you, Harrison Ford.