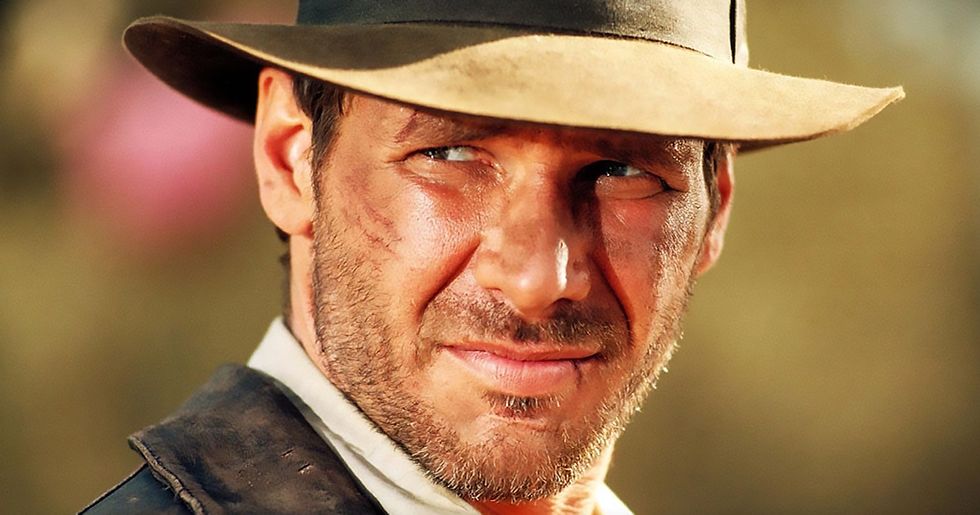 Harrison Ford Says No One Can Replace Him as Indiana Jones

For years now, there has been whispers of a new actor playing Indiana Jones after Harrison Ford hangs up the boots. (Well, Harrison Ford isn't a construction worker, so he doesn't really have boots to hang. What's the older male-actor version of "the boots"? The single earring?)

But, recently, when Ford was asked who he thought could take over the Indiana Jones role, he went scorched Earth, saying that no actor would take over the role. And while Harrison Ford is, like every American, entitled to his opinion, the idea that there won't be another Indiana Jones is harder to swallow than an enormous boulder.

Think of a movie you loved growing up. Go ahead, any movie at all.

I know I really liked Aladdin when I was a kid. I had the VHS and I rewound and watched the "Whole New World" scene over and over again.

Okay, you got one? Great. That movie's gonna get rebooted.

Now we have a brand new Aladdin and "Whole New World" feels so much more condescending. Maybe Jasmine could show herself a whole new world, shining shimmering splendid?

This is just the kind of thing we have to deal with today — every movie is going to get rebooted, and we just have to deal.

Pop culture franchises today are like a roller coaster: they climb up a hill of sequels.

We get sequels at a steady clip. They tick tick tick on up, each movie making the franchise more and more bloated. And with each new entry, the pressure builds — when is the bottom gonna drop out?

Finally, it's too much and they plummet.

There are too many movies in the franchise, and no one even knows where to start for the reboot. It's best to just wipe the slate clean and send the franchise rocketing back down to Earth.

Some sci-fi franchises even do a loop-de-loop.

I see you there, Star Trek, having your old timeline hang out with your new timeline. You broke my brain and I don't like you for it.

And we're on the roller coaster careening down; we scream all the way.

But the only people who are really affected by reboots are the actors being replaced.

Movie reboots don't actually hurt anyone, unless they're actively costing you a paycheck. Take Andrew Garfield, for example: the dude was just getting into the groove of playing Spider-Man when Tom Holland swooped in and snatched it all away. Such a bummer.

Maybe that's why Harrison Ford is so salty about the idea of someone else playing Indiana Jones.

I don't know if Harrison Ford is in the position to need any more money. Each Indiana Jones movie that he's in could buy him at least one entire island upon which he can build himself endless beach houses.

At the same time, for a lot of actors, there's no greater career accomplishment than creating a truly iconic character.

So many roles for actors are bit parts. Someone has to play "Barista 1," the guy who hands the main character his latte for him to turn and spill it on the guy she's going to fall in love with.

The kind of character that could work as a base reality in an SNL sketch.

You know you've created an iconic character when all of America understands their deal so well that they know why it'd be funny if, like, Nancy Pelosi was tagging along.

And Indiana Jones is one of film's great characters.

Another mark of a great character is their ability to produce memorable moments, and with Indy, there are a million. Think about him running from the boulder. Grabbing the idol. Falling into the snake pit. Being kinda racist to Short Round. The list goes on.

It makes sense that Harrison Ford wouldn't want to give that up.

Another possible explanation — he hated Solo: A Star Wars Story, which was the last time he relinquished an iconic character. Although, when you're Harrison Ford and you have so many iconic characters, not all of them are going to go through the transition to another actor smoothly.

Maybe that's why Harrison Ford is so adamant that "nobody" will replace him as Indiana Jones.

In speaking with The Today Show, Harrison Ford made it clear who would follow him as Indiana Jones: nobody. (And that position kind of makes sense — look at how goofy anyone besides Harrison Ford looks in that get-up.)

He said that Indiana Jones would die with him.

When asked who he thought might make a good Indiana Jones once he's retired, Ford said, "Nobody is going to be Indiana Jones, don't you get it? I'm Indiana Jones. When I'm gone, he's gone. It's easy." I guess the end of Indiana Jones is - like a boulder rolling downhill - inevitable.

Although, there's always the possibility that Harrison Ford is salty because he is a delightful curmudgeon.

Harrison Ford hates these kinds of media appearances, so maybe he was just messing with the interviewer because he doesn't, and literally has never, given even one single shit?

Remember, this is the guy who was disgusted by playing Han Solo. Han Solo! So it sure seems like, in addition to hating media appearances, Harrison Ford hates the media he's in.

But, for some reason, he loves playing Indiana Jones.

To get him in The Force Unleashed, director JJ Abrams had to dump a bucket of money in Harrison Ford's lap and promise to kill him so that he'd never have to do one of those stupid Star Wars things ever again. But with Indiana Jones? Ford is not only promising that no one will take the role form him, even out of his cold, dead hands, he's also got Steven Spielberg out here making the rounds to say, "The one thing I will tell you is I’m not killing off Harrison at the end of it." Talk about job security.

The guy's even getting ready to play the adventurous archeologist in a fifth movie.

That's right, at seventy-seven years of age, Harrison Ford will be donning a little hat and taking his little whip and going on another little adventure through the jungle! How fun for him! (You have to be extra supportive when seniors do anything that isn't playing Solitaire or watching TV or else they'll go right back to it.)

But still, Harrison Ford is objectively wrong. The next Indiana Jones is probably being decided upon right now.

We bet that there are a minimum of six board room meetings happening at this very moment wherein a powerful cabal of executives are looming over headshots, deciding who will next wear the fedora.

Chris Pratt is likely to get the gig.

Having been rumored for years, the Parks and Recreation and Guardians of the Galaxy star feels like the logical choice to play Indiana Jones next.

In fact, it was almost certainly Chris Pratt that Harrison Ford meant to call out.

In the same Today interview, Ford let the prospective new Indy down as gently as he could, saying, "This is a hell of a way to tell Chris Pine this. I'm sorry, man." He definitely meant Chris Pratt, and there's almost no way that Pratt took it well.

It could be that Chris Pratt is a big, smiling goofball totally unaware of what's going on around him, like he was on Parks and Recreation. Oh man, I just want actors to behave in real life the way their characters do so bad.

In any event, I think we can all agree Chris Pine was stoked to hear his name.

My guy's just happy for the shout-out. Things have been slow since Star Trek 3: About Ready for the Reboot came out.

That said, the next Indiana Jones should obviously be Emilia Clarke.

I know she seemed cold on this last season of Game of Thrones, but we've seen a ton of range from her in years past. Remember how snarky she was when she first met Tyrion? How adventurous she was when she crossed the narrow sea? How good she looked when Ser Jorah gave her a fedora and whip? Okay, that never happened but you know that if Ser Jorah found a fedora and a whip, he would give it to her and she would look good.

But, I don't know... maybe Indiana Jones should die?

We've had four movies and a fifth one is coming up — do we need any more Indiana Jones? Maybe once Harrison Ford decides that he's done, we should let the poor archeologist become that which he loves most — a pile of bones laying around in an ancient temple.

Maybe it's time to stop reboot culture before we reach franchise critical mass?

It would be great for the Indiana Jones franchise to lead by example and rest once its initial run of movies is over. If everything gets rebooted, we're never going to have a goddamn minute to ourselves! We'll constantly be making plans with our friends to get out to the theater to see Timothee Chalamet in Citizen Kane or Miles Teller in "A Trip to the Moon."

It's not like we're going to miss out on Indiana Jones kind of movies.

We can get our adventuring in other places besides Indiana Jones movies. It's not like Lara Croft is going anywhere. She'll be jumping over spike pits and desecrating sacred resting places for years to come.

And Nathan Drake has Indy-style videogames on lock.

Do we really need to watch Indiana Jones anymore now that we can pick up a Playstation controller and be Indiana Jones? The Uncharted series offers video gamers the chance to do everything that Indiana Jones did, from swinging across chasms on vines to stealing ancient artifacts to shooting henchmen who presumably have a family at home.

But who are we kidding? Indiana Jones is going to be rebooted, and we're all going to see it.

It would be an act of artistic integrity to shut down the Indiana Jones franchise, but with how much money Indiana Jones movies make, that's just not going to happen. But who am I to complain? I'll be there on the reboot's opening night — to complain!