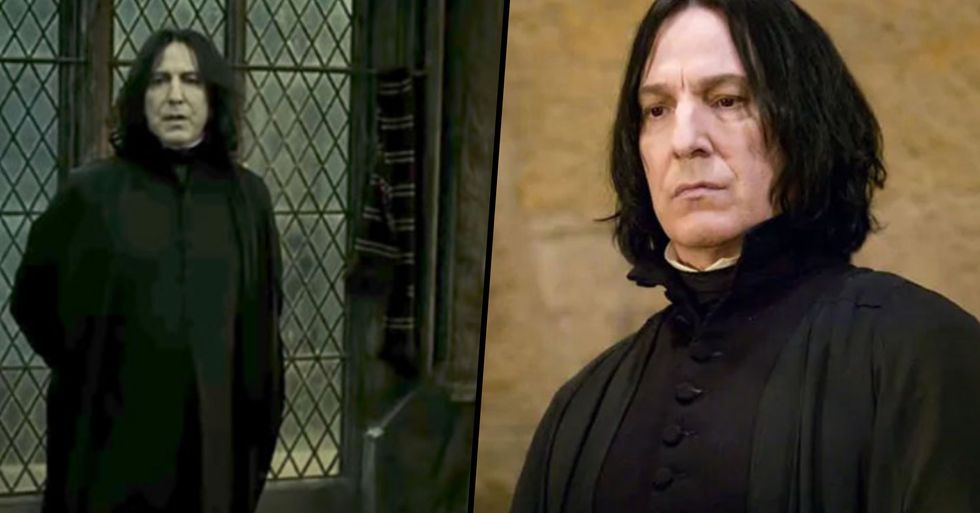 A staple part of all of our childhoods has to be the Harry Potter series. Whether you spent your time memorizing each line in the book, or you preferred to just watch the movies, the Wizarding World has always had a special place in all of our hearts.

Well, today's focus is going to be on one of the most complex characters ever created, Severus Snape, as we count down some of his best and most defining qualities that you may have not picked-up on.

From the little snippets of his childhood trauma, we could see there was more to the professor than just his easily irritable persona.

And he definitely stands out from the rest.

While characters like Hermione Granger and Albus Dumbledore gained a lot more attention for their traits, there were little signs in Snape's behavior that made us sympathize with him more than other traditionally "evil" characters.

But of course, as with any complex character, Snape was always the center of debate.

The lines between good and evil were always blurred with this man, but fans have recently been revealing some small but important details that might help us finally make a decision...

Let's start with this one. Snape's look is really important in the entire series as it remains consistently in line with his emotions and reflects real-life social situations.

Throughout the book, other characters that are described as "handsome" or "attractive" turn out to be some of the evilest.

Take Tom Riddle for instance. His good looks helped him to manipulate and trick other people. We also see a similar pattern with "good" characters too. When he was younger, Sirius' beauty defines his childhood, but he turned out to be one of Snape's bullies.

If you take this to a deeper level, Snape's unattractiveness makes it even more difficult for him to establish relationships.

On a slightly smaller scale, this is also the case with Hermione, who was never meant to be regarded as "beautiful." She was outcasted right from the start because of it. If they were to be regarded as such, the other characters would have reacted to them in a totally different way.

19. His contrast with other teachers.

Look at the way two teachers that "hate" Harry react when they are in danger.

When Snape and Harry first meet eyes, Harry's scar started hurting, so he always assumed it was Snape causing that pain. However, it was really another professor who was stood next to him that had Voldermort living on the back of his head.

It's these little things, guys.

His realistic portrayal of his trauma allows others to empathize with him.

In Snape's death scene, which everyone found difficult to stomach, you can see a Gryfindor scarf hanging on the wall. Weird, right? Well, fans have picked up on the fact that this links with something Dumbledore once said: "Sometimes I think we sort too soon..."

Throughout the movies, Snape's costumes are the only ones that didn't change. His look was iconic to him.

Even one of the costume designers who changed everyone's outfits said she couldn't change his because they were "perfect."

And here's an interesting fact for you: Apparently, Alan Rickman had a lot of input into what he felt would be right for his character.

Even JK Rowling herself told us that the character of Snape is grey. Sure he was vindictive, but he also gave his life for the good of the Wizarding World...

This is probably one of the more well-known Snape facts, but even when it came out, everyone was left speechless.

While talking to Harry, Snape says this:

"Tell me Mr. Potter, what do you get if I added powdered root of asphodel to an infusion of wormwood?" "'Asphodel is a flower From the lily family meaning 'my regrets follow you to the grave'. And wormwood means 'absence'. So Snape was literally saying: 'I bitterly regret lily’s death." Wow.

Can someone let me know?

As I mentioned previously, there are a lot of similarities between the way these two characters are built, from their intelligence to their appearance but there's one thing that stands out in the way their characters react to each other...

They both have mutual respect for each other.

Hermione feels as though she can learn a lot from someone like Snape as opposed to someone like Umbridge because she knows Snape is a good teacher and can help her succeed.

Lily's sister, Petunia, refers to "that awful boy" when recalling a memory of her sister spending time with a boy. At first, everyone assumes its James but that couldn't be the case because they got together later on.

The "expelliarmus" spell was taught to Harry by Snape, and later became his signature spell that helped defeat evil.

We've talked about this a little before, but what would have come of Snape if life had been a little kinder to him? His tragic childhood and adult life helps us sympathize with him more as we can all see bits of ourselves in his downfall.

What gets to me is the fact that Snape knew what was going to happen to him and his colleagues and students for a while and yet, all he could do was prepare for it.

A Tumblr user called "bravestslytherin" outlined a few important points in a thread.

And it literally breaks my heart to read it...

The first part outlines the years before Voldermort's full rise...

The fact that he had no one else to confide in, so he had to suffer in silence for the greater good is upsetting, let alone pitiful.

That's why his death scene was so hard to stomach...

Because there was so much he didn't get closure for.

Every time I read the post again, it makes me sad...

So yeah, submissions for fanfics are totally open now.

When they're both fighting in the great hall, Snape re-directs McGonagall's spell to the death eaters behind him which helps out The Order. It's hard to spot, but you can notice it if you play it in slow motion.

After Snape has killed Dumbledore and Harry is running after him as well as the other death eaters, Snape makes sure Bellatrix and the rest of the squad go on ahead leaving him and Snape alone.

After that, Snape leaves once Harry is safe.

And yet again, it's always the little things that go unnoticed.

Snape constantly snaps back at her as well as gives her side glances because he knows she's pure evil.

Snape rarely ever expresses his love for people, but with Dumbledore and McGonagall, he trusted them with his life and it's clear to see throughout all the movies.

Harry refuses to call Snape "professor" like everyone else. Instead he just simply refers to him as "Snape." However, after he learns the truth about him from The Pensieve, he suddenly does a 180 and starts calling him "Professor Snape."

It conveys to us that Harry thought he was evil this whole time...

Until he learned about his relationship with his mother, as well as his consistent intentions to keep everyone safe.

In arguably one of the most difficult scenes to watch, we can see the fear and sadness in Snape's eyes as Dumbledore practically begs him to kill him.

His voice even shakes as he mutters the spell.

Even though he already knew for a long time that it would come down to this, he still hesitated before killing off one of the only people he ever trusted with his life. God, here come the waterworks...

And that brings us to the end of our compilation.

What are your thoughts about Snape? Regardless, we appreciate him as well as Alan Rickman, who is dearly missed. RIP to both of these amazing people.