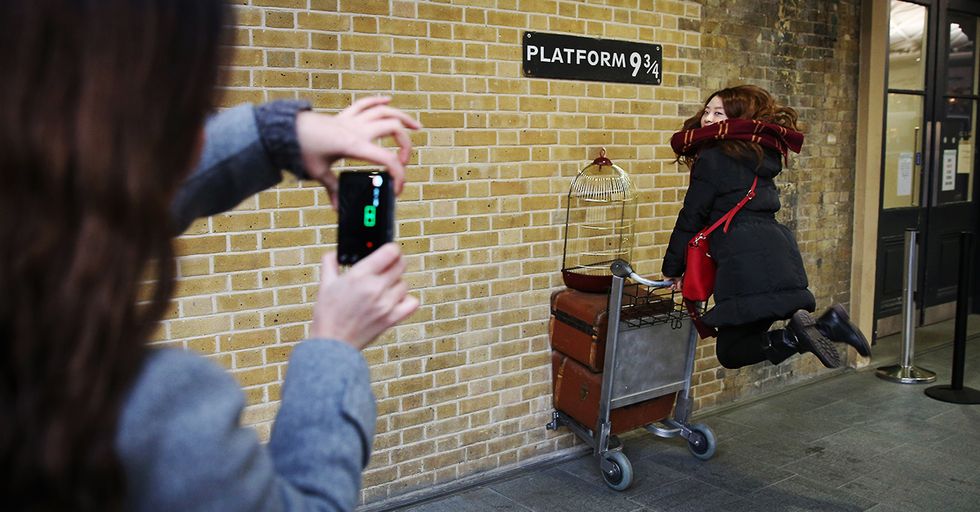 The Harry Potter movies (and books) inspired generations of fans. And even though that particular series is over now, we can still visit the places that made them great.

As a result of the Potter-craze that took the world by storm, there are a ton of things out there for fans to experience. From real-world set locations to masterful replicas, fans have plenty to choose from.

For all the Potterheads out there, this one is for you: we've put together the ultimate travel to-do list!

The Elephant House is where J.K. Rowling would write.

Early “Harry Potter" novels were written in the back room of this coffee shop in Edinburgh, Scotland.

via: The Rowling Library

J.K. Rowling wrote “JK Rowling finished writing Harry Potter and the Deathly Hallows in this room (652) on 11th Jan 2007," on a marble bust in the Balmoral Hotel.

You can visit the Greyfriars graveyard as well.

Tom Riddle’s gravestone is actually erected in the graveyard.

Of course, all fans should visit The Wizarding World of Harry Potter.

Given your choice of Florida or California, fans of the series in the U.S. can go and visit Diagon Alley, Hogwarts, and Hogsmeade.

And that’s not the only ‘Wizarding World’ setup!

The Wizarding World in Osaka, Japan, is also a popular destination. These theme parks look like the Wizarding World, but there’s a place that will actually treat you like a wizard! Find out how to become the magician you’ve always dreamt of on the next page.

Props, replicas, and nearly everything important in the making of the movies lives in London, England as part of the tour.

Visit the Glenfinnan Viaduct in Scotland and take the same scenic train trip as Hogwarts students.

If you’re REALLY dedicated, you could find Privet Drive.

Visit Alnwick in North Umberland, England for a look at the castle. Visitors can also take broom-flying and wizardry classes on-site.

The College of Wizardry is a four-day experience in Poland’s Czocha Castle. You ARE a wizard, Harry! On the next page, check out some of the best places in London to visit for Harry Potter nostalgia.

If you loved the idea of Quidditch, there’s a Quidditch World Cup!

The wizard sport, played on broomsticks, has been adapted for a Muggle’s limitations. This year’s (2018) is being hosted in Florence, Italy.

London took pity on muggles, and offers Muggle Tours of the city.

Guests on the tour can visit the Leaky Cauldron, Knockturn Alley, 12 Grimmauld Place, and the Ministry of Magic’s visitors entrance.

And you can’t leave London without seeing Platform 9 3/4 itself.

King’s Cross Station in London might not have the technology to let visitors run through a wall, but you can still snap a cute photo in front of the “platform."

If you book this special room for the night, you’ll be sleeping in chambers designed after Hogwarts.

Toronto has the ultimate HP-themed bar.

The Lockhart in Toronto, Canada is peppered with Harry Potter decor and themed drinks. Visiting a Hogwarts replica is all well and good, but if you want to stand where the filmmakers stood, we’ve got you covered on the next page!

Visit the place in London’s zoo where Harry learned to speak with snakes.

The Reptile House in London Zoo commemorates the scene with a plaque, and you can see exactly where the scene was shot.

The iconic hallways of Gloucester Cathedral were featured in three HP movies.

You’ve seen the cathedral in The Sorcerer’s Stone, The Chamber of Secrets, and The Half Blood Prince.

For more “Half Blood Prince" sightseeing, check out Millennium Bridge.

The bridge, located in London, England, collapses under a Death Eater’s attack in the movie.

Leadenhall Market in London is the closest you’ll get to Diagon Alley in the wild.

If you want the ACTUAL wizarding street, you’ll have to visit one of Universal’s parks, but this market boasts the spot where Dragon Alley’s entrance was filmed in the movie.

The wizarding school’s library and infirmary were both filmed at Oxford. Besides buildings, the Harry Potter movies had some truly gorgeous scenery. On the next page, find out where in the world to visit and see some of the beautiful vistas you saw on screen!

You can visit the grounds of Hogwarts in Glencoe, Scotland.

Many of the films’ crazy beautiful landscapes were filmed in Glencoe.

England is also home to the real-life Forbidden Forest!

Black Park in Buckinghamshire was the site of filming for scenes in Hogwarts’ Forbidden Forest.

Sit in the Hogwarts courtyard at Durham Cathedral.

Some of Harry’s classrooms and other castle locales were filmed at the famous cathedral.

If you’re interested in the second train station from the films, check out Goathland Station.

Hogsmeade’s station, which was featured in a few of the HP movies, was filmed at Goathland.

Finally, one of The Half Blood Prince’s most prominent landscapes can be found at the Cliffs of Moher.

When Dumbledore and Harry apparatus to the cliffside cave in HBP, they’re filming at the beautiful Cliffs of Moher. Use this story to plan the ultimate Harry Potter-themed trip, and share with your fellow Potterheads!