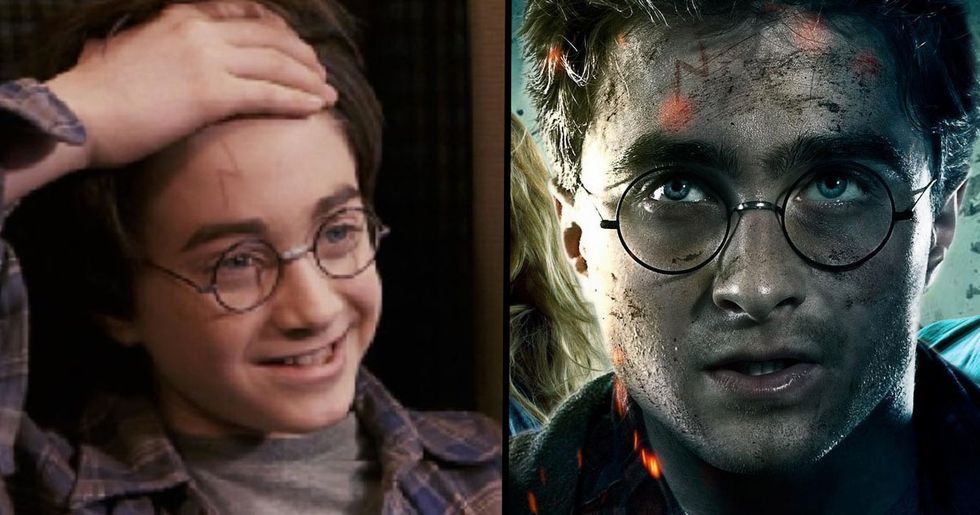 When you think of Harry Potter, it's likely a few distinctive things come to mind. His round glasses, for example, or his perennially messy hair. And one feature which is truly iconic is of course, that scar.

The scar on Harry's forehead is one of his defining features, and appeared there after Lord Voldemort tried to kill him with the Avada Kedavra curse. It serves as a link between Harry and Voldemort, which ultimately allows Harry to successfully fight him and destroy the horcruxes keeping him alive.

The famous forehead scar has always had a unique shape - essentially, that of a lightning bolt. But according to Twitter feed Today Years Old, that lightning-bolt-esque shape is purely a coincidence, and Harry's scar is shaped in that way for quite a different reason. Potter fans' minds are blown by this recent revelation - although we're still looking for confirmation from J.K. Rowling before we fully believe.

Harry Potter started as a series of fantasy books written by J.K. Rowling.

The first, Harry Potter and the Sorcerer's Stone, was published in 1997, while the seventh and final book came out in 2007. The books were a massive success, and for many millennials, they came to define their childhoods.

For those not in the know, then why the hell are you here? Anyway, here's a quick rundown.

The books follow a young boy, named Harry Potter, as he attends Hogwarts School of Witchcraft and Wizardry. The main storyline throughout the series revolves around Harry's nemesis, a dark wizard called Lord Voldemort. Voldermort murdered Harry's parents, and somehow Harry survived with just a scar.

The books are the best-selling series in history.

The series was made into films, starring Daniel Radcliffe as Harry Potter. The first film came out in 2001, while the last was released in 2011.

Here they are at the premier of the first film in November 2001 - looking very young, and very cute.

The films were as much of a success as the books.

By which we mean both highly critically acclaimed and massively popular. Here are the three main actors at the premier of the final film, Harry Potter and the Deathly Hallows: Part 2, in 2011.

Harry Potter is known for having a very distinctive appearance.

His round glasses and school uniform have long made the character a favourite at fancy-dress parties. And another thing which makes Harry stand out from the crowd is his unusual forehead scar.

The scar has been with Harry since he was a baby.

It's a real definitive feature of the character, and acts as a sort of memory of his life's path, and the unfinished business he has with Voldemort.

Here he is showing off his scar on his first day of school.

His survival of Voldermort's attack made Harry famous in the wizarding world. He's known as "the boy who lived," and his scar is the proof of that.

The scar is the result of an attack by Voldermort on young Harry's family.

Voldermort tracked down Harry's parents, James and Lily Potter, in Godric's Hollow, and murdered them both. He then tried to kill Harry, but couldn't - because Lily's unselfish and unconditional love saved his life.

The scar serves as a bond between Harry and the Dark Lord.

When Voldemort is growing in power, Harry feels pain in his scar. Sometimes the scar even allows each to see what the other is thinking.

The scar is a hugely important part of the Harry Potter books and films.

It has huge symbolic importance for fans of the book, and serves to represent Harry Potter even at a quick glance. Which is why news that it may not be exactly what fans think it is has rocked the internet.

They claimed that the scar is shaped not like a lightning bolt, but shows the hand motion a wizard uses to case the Avada Kedavra curse.

The Avada Kedavra curse is what killed Harry's parents.

It's one of three unforgivable curses in the wizarding world, and is represented on screen by flashes of sickly green light.

The information comes straight from the Harry Potter Wiki page.

The tweet referenced this page, which shows the hand motion used to cast the Avada Kedavra curve to look very similar to a certain famous forehead scar.

The news had some fans shook.

Even though the books ended more than ten years ago, there's always new information coming out to blow fans' minds.

Fans realised they may have been living a lie.

It's odd to think that maybe we all just ...   assumed that the scar was lightning bolt shaped?

Others had a different response.

Eager to show off their Harry Potter knowledge, some Twitter users quickly threw their hats in the ring, adding their opinions to the discussion of the scar.

There were a few different ideas about the scar-shape's origin.

Some thought the scar was originally supposed to be lightning bolt shaped, and then Rowling came up with the hand motion by way of explanation.

They claimed the scar is actually both - a lightning bolt and a reflection of the hand motion used to cast the spell.

While others still were less receptive.

Some were very suspicious of the news - particularly when you consider the source is an unofficial one.

Fans pointed out that this "fact" may not be entirely factual.

One Twitter user claimed this motion had not been mentioned elsewhere in the Harry Potter canon - which, if true, does make this claim seem a little suspect.

She often makes revelations about the Harry Potter universe on Twitter, so we're staying tuned to see if she has anything to offer on this debate.

There is something we've noticed in the films though.

People casting the Avada Kedavra spell don't tend to do the zig-zagging hand motion you'd expect if this was the cause of Harry's scar.

Rather, they tend to just make a pointing gesture.

Here's Snape casting the curse on Dumbledore - and there's not a side-to-side, zig-zagging shape that even vaguely resembles a lightning bolt.

There's plenty of evidence against the hand motion theory.

Here's Bellatrix LeStrange casting the curse on Sirius Black. Again, she appears to throw it forwards, rather than moving her arm side to side.

Does this mean we're going to have to read the entire seven books again to look for references to the Avada Kedavra hand motion?

Some Twitter users pointed out another suspicious aspect to the theory.

@todayyearsoldig Then why is it literally back to front in your picture? Talking nonsense
— Ben Massey (@Ben Massey)1547302785.0

The image shown on the Harry Potter Wiki is actually back to front. This may suggest the theory is a little half-baked.

Either way, the whole discussion has rocked the Harry Potter fandom.

Whether it's true or not, the idea that there's constant new information to be found about the series is a part of its ongoing appeal. It's what makes fans still feel like Harry Potter is a part of their lives.

And as for the reason behind Harry's scar shape?

Honestly - we're still confused. While it seems unlikely that the Harry Potter Wiki page would have totally invented the hand motion, the lack of current canonical evidence means we have to take this theory with a grain of salt. At least for now.