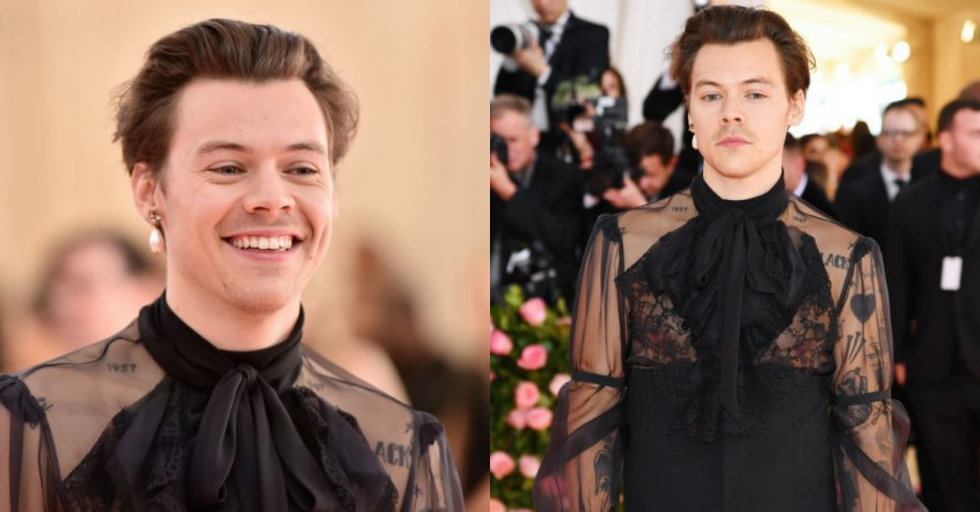 It's the first Monday in May, and that means it's time for another Met Gala. It's the one event that brings you every celebrity you've ever heard of, the coolest outfits seen on planet earth, and unbelievable amounts of jealousy that you weren't invited. Just me?

This year's theme: Camp: Notes on Fashion. And not like elementary school camp. That would be super interesting, but not very fashion forward. We would absolutely love it though. It was actually inspired by Susan Sontag's 1964 essay "Notes on Camp." Camp, in this context, means extra, over-the-top, and simply outrageous.

As celebrities pour into the Metropolitan Museum of Modern Art in New York, we're helping them show off some of the coolest fashion of 2019. So buckle up, buttercup, because you're in for a real treat. Starting off with the brightest star herself.

Okay, maybe we were wrong about the intention of the whole "camp" thing because it looks like Gaga just showed up with an entire freaking tent.

I aspire to be the type of famous that requires four men to carry my dress while holding umbrellas.

And she made a quick change! Because of course she did. She's the best.

YouTuber Liza Koshy looks like she's wearing a little boat in case it starts to rain really hard, and I'm here for it.

Serena, yes. You look like Belle from Beauty and the Beast had sex under a blossoming cherry tree. These descriptions are getting weirder.

Guys, Billy Porter showed up being carried by six buff dudes. What?

He's wearing wings. This is not a drill. I want this outfit, but I'm not sure the dive bars I go to in Hollywood are ready for it.

Actress Laverne Cox showing up looking like she's ready to freaking witch someone, and it's awesome.

Harry Styles just casually showing some nip. But if anyone's gonna do it, I guess it's him.

At least he looks happy about it! Sheer has never looked so good on a man.

Businesswoman Wendi Murdoch showing up like she just stepped out of a watercolor painting, and I'm here for it.

When does Taron Egerton not look hot? Even when he's wearing a freaking shoelace as a tie.

Hamish Bowles is an editor for Vogue and his outfit is on point. It looks like he's trying to hide away in Joseph's technicolor dream coat.

YES. Always yes. Actress Awkwafina is just a walking piece of jewelry and it's wonderful.

The Marvelous Mrs. Maisel star looks like the goddess she is.

Karlie Kloss putting the super in supermodel tonight. Those sleeves...

Actor Richard Madden wearing all black to mourn this season of Game of Thrones.

Yes! Those earrings look like they weigh 10lbs each, but I'm here for it.

Celine, what are you wearing on your head? I must know. It's simultaneously way too much, and the perfect amount, and I want one.

Showing up dressed like an actual chandelier. How will Sia feel?!

Emily Blunt is a shining star and I don't care who knows.

I will never be this handsome, and that's okay. I've come to terms with it.

Thank you, Darren, for actually dressing up and not just going with a classic tux. Even if that tie does make you look like you're ready to chow down at a Bubba Gumps.

I’m dead. What is that green thing? I don’t understand fashion.

Jared why? Who gave you the right to do this to us? I can't tell which head is the doll head if I'm being 100% honest.

Rami Malek is a fan of posing awkwardly on the red carpet.

Quick question. Does anyone know if they are ever allowed to be apart? Also, are they allowed to talk to their sister Elizabeth? Because I've never seen either of those scenarios and I'm very curious.

Can I just say, Saorise Ronan looks like a freaking Irish superhero and I love her?

Aka Florence and the Machine, aka is she secretly a dragon?

Creator of Glee, American Horror Story, and Pose showing up dressed like the coolest Pope of all time.

Musician of a generation Frank Ocean showing up dressed like he doesn't give a shit, because honestly, he probably doesn't. And we love him for it.

OMG is that not the most weirdly American thing you've ever seen? Maybe it's that walking flag in the background that's really throwing me off.

Hailey Bieber, and I say this with no disrespect, looks like she rolled herself up in that pink carpet, and did a flawless job.

Cole Sprouse looks like he just hopped out of a television while he was hosting a 1950s game show, and it's perfect.

Am I allowed to be disappointed at how low-key her outfit is? I mean it looks great, but it's Miley! I expected more than one of those restaurant mints.

Constance Wu looks like what I wish my whole life looked like. Covered in riches without a care in the world. And also gorgeous and badass. I am none of those things.

I kind of feel like this whole night is as if the Pink Ladies from Grease all went to prom with an unlimited budget.

Badass actress Ruth Wilson has a handbag that costs more than my entire existence.

What is there to even say about actress Carey Mulligan? She's perfect and I want her to act out my life story.

I'm sorry, Gigi, but this outfit is definitely showing up in a nightmare I'm having six years from now.

Shoutout to the dudes behind Halsey making sure she doesn't trip.

Did everyone get the color palette but me? I'm sitting here in my jeans and a black top. No one told me to wear salmon!

Do you think Kanye is wearing his own clothes and do you think Kim Kardashian is even a real person anymore because honestly I can't tell?

Nick Jonas holding that scarf like he's a waiter about to pour your bottle of wine.

Guys, the Jenners are here. And Kendall looks like a phoenix. Start the Gala, it's time.

Those are big ears. That is all.

Model Bella Hadid looks like if Jennifer Lawrence and Thanos had a baby.

She got her flower crown form Coachella!

How is J Lo consistently the coolest person ever at these events? Killin it.

Seriously the amount of money those seven people have...

I have no jokes for this dress. It's just awesome. I want to wear it grocery shopping.

Low key looks kind of like a newspaper? With a cape. Because Wonder Woman needs a cape at all times It's in her contract.

Workout on top, millionaire gala on the bottom.

Emma kind of looks like an estranged child of David Bowie's, and I love it.

I hate to say, not as good as Cardi B. Come at me. Actually please don't. I'm very fragile.