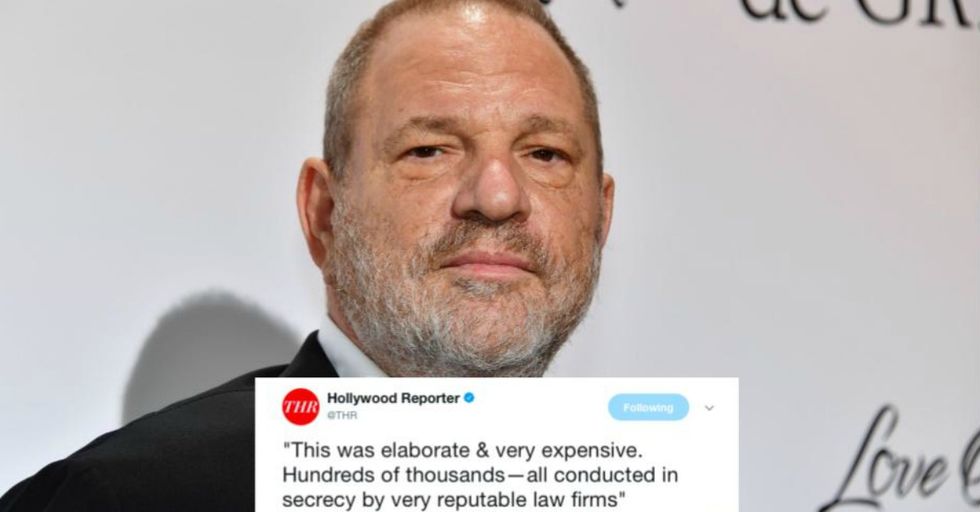 Harvey Weinstein Paid Upwards of $600,000 to Spy on and Silence His Victims

The Harvey Weinstein scandal just keeps growing. A mere month after the once-prominent Hollywood producer was accused of sexually assaulting up to 100 women, the fallout has touched multiple industries and created a cascading effect. Prominent men from publishing to film and TV to the restaurant industry have been outed as sexual abusers and toppled from their positions of power and influence.

For Weinstein himself, the aftermath has been dire. He has lost his company, his once unquestionable domination of the Hollywood food chain, and police departments in multiple countries are looking into the allegations.

Now another layer has emerged.

On Monday, Ronan Farrow, one of the journalists that broke the Weinstein story, published an article in the New Yorker detailing the lengths to which Weinstein went to ensure that his accusers remained silent.

According to Farrow, Weinstein and his team, led by lawyer David Boies, set out to suppress allegations of sexual assault against the one-time movie mogul by collecting information on the women and journalists attempting to bring the story to light.

Two of the most prominent private security firms Weinstein hired were Kroll and Black Cube. Farrow explains that "Black Cube, which has branches in Tel Aviv, London, and Paris, offers its clients the skills of operatives “highly experienced and trained in Israel’s elite military and governmental intelligence units," according to its literature."

Farrow describes a system of stalking and intimidation that mirrors Cold War tactics.

The work he did on behalf of Harvey Weinstein will be a permanent black mark on David Boies's name.… https://t.co/gVq9xZweSv
— The New Republic (@The New Republic)1510097437.0

"Two private investigators from Black Cube, using false identities, met with the actress Rose McGowan, who eventually publicly accused Weinstein of rape, to extract information from her. One of the investigators pretended to be a women’s-rights advocate and secretly recorded at least four meetings with McGowan."

This same investigator, who variously went by the name Diana Filip and Anna contacted Rose McGowen, Farrow himself, as well as another journalist working on the Weinstein allegations, Ben Wallace.

Tonight, the bravery of the women who broke the silence about Weinstein is clearer than ever.
— Jodi Kantor (@Jodi Kantor)1510025329.0

The investigator pretended to be a woman's rights activist even up to October 23 of this year, well after the allegations against Weinstein were made public. In fact, she was an employee of Black Cube and a former officer of the Israeli Defense Forces. When Farrow sent McGowen a picture of the investigator via email, she immediately recognized her. “Oh my God," Farrow says she wrote back. “Reuben Capital. Diana Filip. No fucking way."

Wallace had a similar reaction when he saw the picture. But sending investigators wasn't the only shady tactic Black Cube used on Weinstein's behalf.

According to Farrow, "Black Cube also agreed to hire “an investigative journalist, as per the Client request," who would be required to conduct ten interviews a month for four months and be paid forty thousand dollars." McGowen and other actresses including Annabelle Sciorra, who accused Weinstein of rape, subsequently received calls. “It scared me that Harvey was testing to see if I would talk," Sciorra said. But that wasn't all...

Weinstein also used other journalists to mine for information, as well as former work colleagues, who had no idea they were part of Weinstein's dirty tactics.

One former Weinstein staffer, Pamela Lubell, describes being told by Weinstein that he wanted her to do a book on the glory days of Miramax, but she had to call everyone she knew first. She quickly realized the calls weren't innocent. "'It got kind of intense,' Lubell recalled. 'We didn’t know these people, and all of a sudden this was something very different from what we signed up for.'" Several of the targeted women said that they felt the calls they received from Lubell and Doyle Chambers, and from Weinstein himself, were frightening."

Lubell says that she hasn't slept since the allegations came out, and that she had no idea he was a predator. She also wonders why she hadn't suspected sooner.

But then, it seems, a lot of people weren't aware of the depths of Weinstein's nefariousness. He reportedly paid up to $600,000 to stalk and intimidate his victims, who themselves didn't know the depths to which he'd sunk. McGowan agrees. "It was like the movie ‘Gaslight... Everyone lied to me all the time... I’ve lived inside a mirrored fun house."