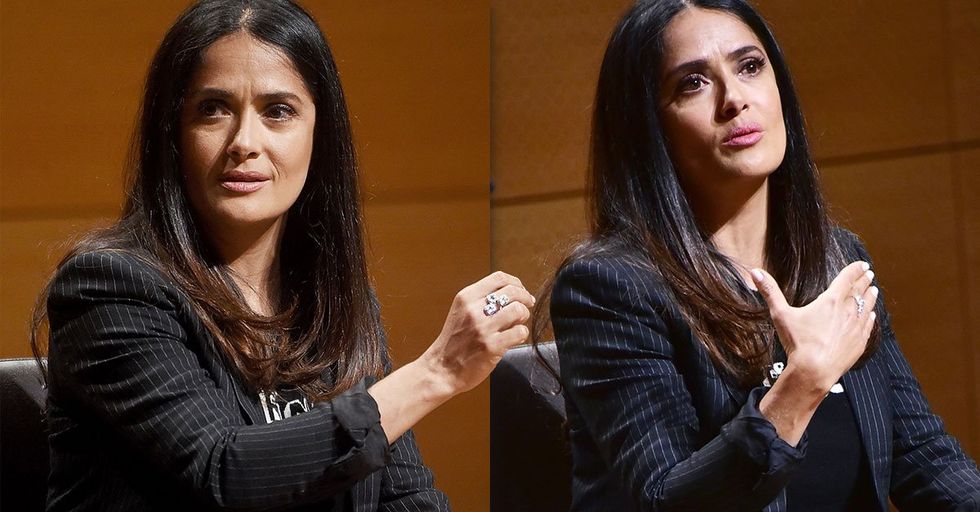 In 2002, the movie Frida burst into theaters. A colorful biopic that focused on the passionate, colorful life of acclaimed Mexican artist, Frida Kahlo, the film was both a box office and Academy awards smash, netting $56 million during its theatrical run (on a mere $12 million budget) and earning two Oscars.

Frida was a breath of fresh air with its honest, yet stylized portrayal of a female artist struggling to carve her way in a male-dominated society, while being at loggerheads with the love of her life, unfaithful husband Diego Rivera.
The film starred actress Salma Hayek, who also produced the work. As Hayek explained in her op-ed for the NY Times:

My greatest ambition was to tell [Frida Kahlo's] story. It became my mission to portray the life of this extraordinary artist and to show my native Mexico in a way that combated stereotypes.

In the aftermath of Frida's triumphant awards run, everyone was sure Salma Hayek was on her way to becoming one of the new queens of Hollywood. She was already an A-Lister, but now her position was assured... Or so everyone thought. They were wrong.
Within months, Hayek all but disappeared from the Hollywood A-List, only turning up in the occasional supporting role or two. Where had the actress whose passionate championing of a story turned it to Oscar gold gone, people wondered?
The answer, as it turns out, was Harvey Weinstein. On Tuesday, Hayek published a blistering op-ed in the New York Times called "Harvey Weinstein Is My Monster Too," which explained how Weinstein's harassment led to her disappearance from the Hollywood A-List.

Hayek says that in the beginning, she fought to take Frida to Weinstein. As she explains:

The Weinstein empire, which was then Miramax, had become synonymous with quality, sophistication and risk taking — a haven for artists who were complex and defiant. It was everything that Frida was to me and everything I aspired to be.

I had started a journey to produce the film with a different company, but I fought to get it back to take it to Harvey.

In hindsight, this was probably not the best decision. Weinstein, as Hayek would come to discover, was a monster.  As she states, "Knowing what I know now, I wonder if it wasn’t my friendship with them — and Quentin Tarantino and George Clooney — that saved me from being raped."
The first sign that Weinstein was not on the up-and-up was the deal that he structured with Hayek – a deal which, unfortunately, was relatively common in those day.

As an actress, I would be paid the minimum Screen Actors Guild scale plus 10 percent. As a producer, I would receive a credit that would not yet be defined, but no payment, which was not that rare for a female producer in the ’90s. He also demanded a signed deal for me to do several other films with Miramax, which I thought would cement my status as a leading lady. I did not care about the money; I was so excited to work with him and that company. In my naïveté, I thought my dream had come true.

Hayek then explains how she finally began to understand how horrific Weinstein truly was.

He had validated the last 14 years of my life. He had taken a chance on me — a nobody. He had said yes. Little did I know it would become my turn to say no.

No to opening the door to him at all hours of the night, hotel after hotel, location after location, where he would show up unexpectedly, including one location where I was doing a movie he wasn’t even involved with. No to me taking a shower with him. No to letting a naked friend of his give me a massage. No to letting him give me oral sex. No, no, no, no, no …

And with every refusal came Harvey’s Machiavellian rage.

Weinstein even once threatened her life, Hayek says.  As she explains, "The range of his persuasion tactics went from sweet-talking me to that one time when, in an attack of fury, he said the terrifying words, 'I will kill you, don’t think I can’t.'"
Still, she kept working with him for the sake of sending the movie to production, until finally it became clear Weinstein had absolutely no intention to honor his part of the deal.

I ask all of our male allies in this industry, why have your journeys been so different from ours? I thank you… https://t.co/s8LHCd1C4C
— Jessica Chastain (@Jessica Chastain)1513189238.0

Once Weinstein realized Hayek would not sleep with him to produce the movie, he threatened to take it to another actress, even though Hayek had done the research and sourced the script. She had to sue him for "bad faith," since she knew a sexual harassment claim would get her nowhere.
Once she won, Weinstein put seemingly impossible barriers in her way to prevent the movie from being made. He asked that she:

1. Get a rewrite of the script, with no additional payment.

4. Cast four of the smaller roles with prominent actors.

Hayek did all this, but midway through production, Weinstein ramped up his tactics. Since it was clear she would not sleep with him to make the movie, he told her to either do a full frontal sex scene with another woman, or he would pull the movie.
Hayek heartbreaking describes the day:

I arrived on the set the day we were to shoot the scene that I believed would save the movie. And for the first and last time in my career, I had a nervous breakdown: My body began to shake uncontrollably, my breath was short and I began to cry and cry, unable to stop, as if I were throwing up tears.

Hayek never told the entirety of this ordeal to anyone until recently, and she explains the reason why:

I didn’t consider my voice important, nor did I think it would make a difference. In reality, I was trying to save myself the challenge of explaining several things to my loved ones: Why, when I had casually mentioned that I had been bullied like many others by Harvey, I had excluded a couple of details...

You can read the entire piece here.