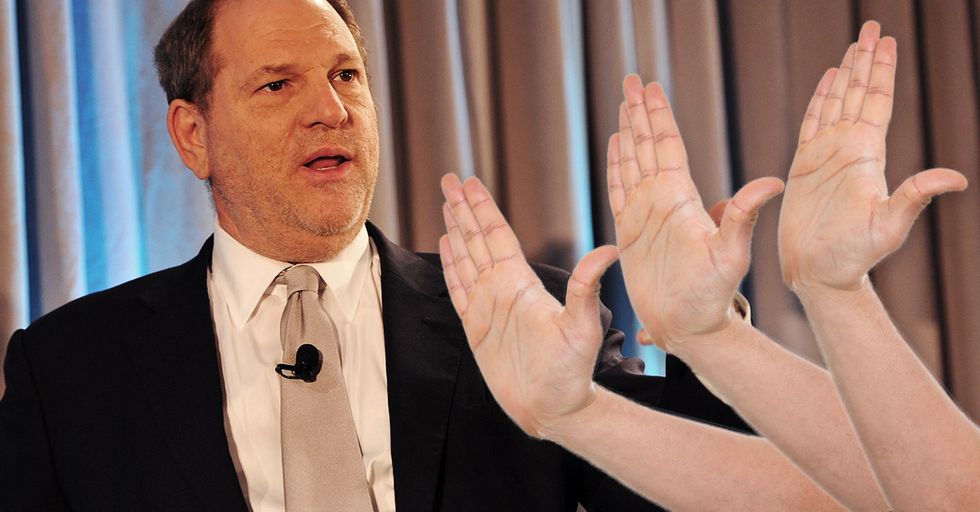 Have you ever heard of the German word "schadenfreude?"

Schadenfreude as defined by the venerable Merriam-Webster is "enjoyment obtained from the troubles of others." Basically, it's being a shady, shady b*tch. And I have to confess, as of this moment – c'est moi!

That's right, the aforementioned shady b*tch, the person currently luxuriating in the very essence of shade is yours truly. Why? Because Harvey Weinstein got pimp slapped... TWICE!
Your remember Harvey Weinstein – former Hollywood producer, currently trying to get "sober." And why is he trying to get sober, you ask? Well, my dearest of dear friends, let me bend your ear and drop veritable pearls of wisdom.
You see, Harvey Weinstein is what we call a serial predator. If Hollywood is a cesspool of vice and degradation, Harvey was the slime shark swimming at the bottom, gills sniffing for the nubile young actresses struggling to make it to the top.
Harvey indulged in such despicable activities as massaging actresses and forcing them to do the same to him while in a bathrobe, and, of course, coercing them to provide sexual favors in exchange for roles. If the actresses denied his approaches or threatened to speak out, Harvey would destroy their careers.
After news of Harvey's predations came out, Hollywood was shocked – shocked – to discover he had been so prolifically evil for so long. In true Hollywood fashion, Harvey promptly took himself to Scottsdale, Arizona, for therapy, and that's where he got slapped.
See, there's a usual narrative that follows these types of stories. A powerful man does an awful thing once, twice, 84 times. When he is found out, he casts blame on the usually (much) less powerful woman. If that doesn't work, he issues an apology and takes himself to Arizona for therapy.

This time, however, it didn't work. People were over the continued harassments. They were over a man who literally acted like a Bond villain. Harvey, apparently, still doesn't know that, even though he has numerous cases pending in numerous countries. Which is why he went to a fancy restaurant in Scottsdale.
According to TMZ, Harvey was innocently sitting with his sober coach when another patron named Steve approached him and told him he liked his movies. When he asked Harvey for a picture, the former mogul said no. Steve returned to his seat.
Some time later, Harvey got up to leave and that's when Steve, who'd had "quite a bit to drink," asked his friend to record and walked up to Weinstein. As the former mogul attempted to make his graceful exit, Steve told him to "get the fuck out of here," called him a "fucking piece of shit" and then slapped him twice in the face – back of the hand and everything. Delicious, I know!

Honestly, I literally don't care what went down afterwards, I just have a couple of questions: See, I told you I was a shady b*tch.