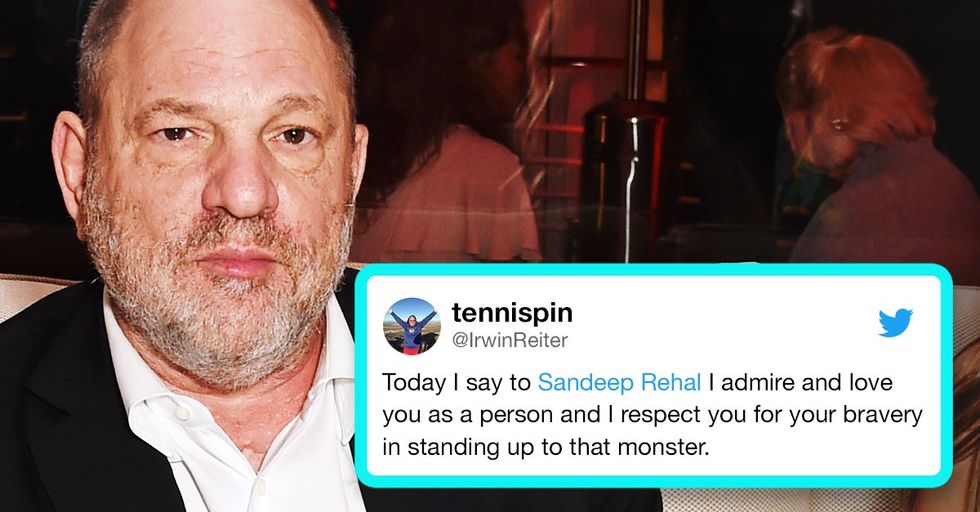 Get your hand sanitizer ready, 'cause you're going to want to use it after this.

One of Harvey Weinstein's former assistants (he had many) is now suing him because she had to, among other things, clean semen from his couch after he was done with his "extremely prolific sexual encounters," and pick up his used condoms.

This new lawsuit is the latest blow to the scandal-ridden Weinstein, who became shorthand for sexual harassment after reports emerged that he had harassed, assaulted, and raped over 80 women.
In the months since, many more prominent men have been accused of sexual harassment, spurring the #MeToo and Time's Up movements. During this time, Weinstein, once the toast of Hollywood, has become a pariah.

He abandoned Hollywood for the more forgiving climes of Scottsdale, Arizona, where he is said to be in recovery for addiction (to being a predator?) Oh, and he also got slapped there, so there's that.

In any event, Weinstein's former assistant, Sandeep Rehal, has lodged a complaint against the once-powerful mogul, saying that the work she did for him crossed the line from professional to personal – very, very personal.

During the more than two years Rehal worked for Weinstein, she was forced to cater to his every whim, supplying him clean underwear, preparing for his sexual encounters, cleaning up after them.
She even had to set up the apartment he used for his encounters, and had to keep a list of his contacts, putting asterisks next to the women he considered his "girls," the same women she'd have to buy lingerie for. Oh, and she had to write his emails while he dictated them... naked.
"Much of Ms. Rehal’s work as an employee of TWC involved catering to Harvey Weinstein’s sexual appetites and activities, and catering to his demeaning and often abusive family members," the filing states. "Ms. Rehal was required to be involved in and aware of the preparations for, and clean up after, Harvey Weinstein’s extremely prolific sexual encounters."
The filing also goes into detail about the nature of Rehal's work.

Rehal began working at the Weinstein Company when she was 26 and quit two years later when she reached an "emotional breaking point" over the ordeal. She's filing the suit not only against Weinstein, but his brother Bob Weinstein and human resources exec Frank Gil for "aiding and abetting that conduct."
Rehal claims that she was also subject to sexual harassment from Weinstein, who would rub her thighs and legs on their daily ride in his Lexus SUV. When she began wearing slacks to prevent this, Weinstein asked her, "You used to dress so cute and now what is going on?"
Weinstein also used foul and demeaning language against Rehal, "regularly referring to her as 'c—' or 'pussy... On numerous occasions he said, 'What’s wrong Sandeep, is the tampon up too far today?'"
Rehal says that Weinstein's behavior wasn't a secret, in fact, it was "common knowledge" at the company, particularly to Gil and Bob Weinstein. Rehal says she didn't come forward because she was frightened of retaliation.
"I am Harvey Weinstein and you are at Weinstein University. I decide whether you graduate," Weinstein would say to her, according to the lawsuit.
She was only emboldened to come forward after dozens of other women did and Weinstein became persona non grata in Hollywood.

Rehal's story is a reminder of the reasons women take so long to come forward. She was young and under the power of much-older man who harassed her. Everyone knew she was being harassed and did nothing. Worse, if she had come out against Weinstein, he would retaliate by destroying her career and smearing her reputation.
Also, there's the sheer sensational element of it. Unless you'd already heard all the other stories about Harvey Weinstein, this one would be difficult to believe. "Weinstein's abuse of power has been well documented, allowing Sandeep finally to reveal the details of her employment, which before now might have seemed too incredibly horrifying to believe," her lawyer, Genie Harrison said.