And if the doll comes back a third time? | 22 Words 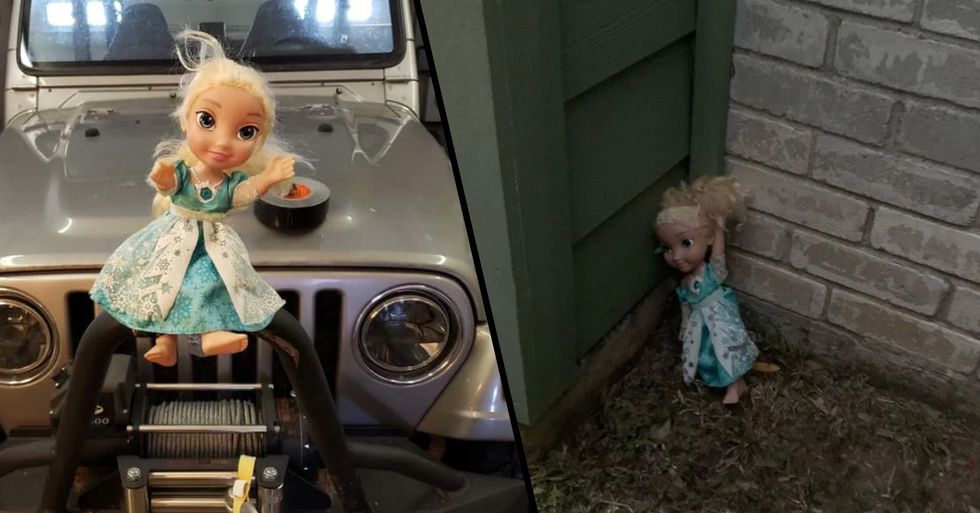 There are some urban legends that have permeated our collective consciousness and are just universally accepted as creepy. But none is quite so universal at the haunted doll. Be it the influence of Chuckie and Annabel, the uncanny valley, or simply the fact they're just a little bit weird - dolls have a real power to make us feel uncomfortable.

But the latest creepy doll to hit the headlines has us covered in goosebumps. Read on for the "haunted" Elsa doll guaranteed to give you nightmares.

Feeling creeped out is something of a universal human experience.

Try as we might to be brave, we're all afraid of something, right?

Being fearless is just an unrealistic goal, after all.

But something that's strange?

There seem to be certain things which we basically all find scary.

From ghosts, to monsters, to things that go bump in the night ...

We all seem to share particular universal fears. Whether it's a hangover from our monkey-brains, or simply that certain things are objectively frightening, we tend to get creeped out by similar things.

And one of these things?

A haunted doll. Who knows why they scare us so much - but it's safe to say, they do.

But there's one creepy doll story in particular ...

That has the whole internet talking this week.

And it involves a fairly unlikely player.

Turns out, Elsa can use her powers for good and evil - and this story has more than a hint of the malevolent about it.

It involves a particular Elsa doll.

After the massive success of the movie franchise, these dolls became pretty ubiquitous in many households.

But one family noticed a problem with theirs.

No matter how hard they try, they can't seem to get rid of this creepy doll!

The doll arrived in their lives in 2013.

Emily Madonia's daughter received the doll as a Christmas gift - and in the beginning, things seemed totally fine.

But then Madonia started to notice odd things about the toy.

"In 2015, it started doing it alternating between Spanish and English. There wasn't a button that changed these, it was just random," she explained to click2Houston.com.

In spite of supposedly being out of battery, the doll would also, "randomly begin to speak and sing."

These unnerving traits caused the family to make a decision.

They chose to part ways with Elsa, tossing her away in the garbage.

But, just a couple of weeks later ...

The doll reappeared. "The kids insisted they didn't put it there, and I believed them because they wouldn't have dug through the garbage outside," Emily says.

"Ro recap for those of you who have not been following our Elsa doll saga, Mat threw it away weeks ago and then we found it inside a wooden bench."

The family were freaked out.

The doll was removed.

"[We] wheeled it to the curb and it was collected on garbage day. Great, right? We went out of town, forgot about it."

But the story took a frightening turn.

"Today Aurélia says "Mom, I saw the Elsa doll again in the backyard." HELP US GET RID OF THIS HAUNTED DOLL!" Emily pleaded.

"Most logical thinkers believe it's a prank, but I don't understand how or when it was done, especially because the garbage truck had taken it away."

So Emily took more drastic action - sending the doll away by mail!

She posted the doll with no return address.

"My friend Chris Hogan received the doll today. 1500 miles from here. (He asked for it, don't be mean!)"

Emily is not taking any chances.

"He's at work now but I asked him to check it for the marker that my daughter colored on it when he gets home, so we can make sure it's the same one!"

Hey, we would be too!

She's not sure this will be the end of the story, either.

"Both times the doll reappeared two weeks later (or I should say, we found her two weeks later, but hard to tell how long she was there) so I'm curious how it will go from here. That's all I got for now."

And if the doll comes back a third time?

"If the doll comes back, I might have to open my mind to some of the more supernatural solutions," says Emily. Fancy more true and terrifying stories? Scroll on to learn about the haunted house no one has ever managed to make it all the way through.