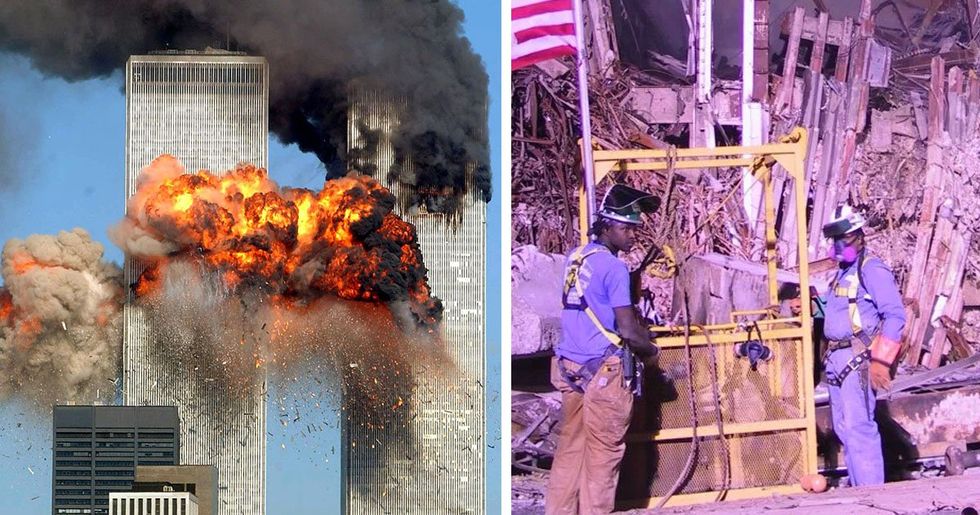 This is a date that the world will never forget. On this fateful day, New York City was attacked in what would become the largest-scale terror attack in modern history.

While the world mourned for the thousands who died in the attacks, the rebuilding process began. And now, thousands of never-before-seen pictures of the wreckage and clean-up operations have been unearthed.

The photos shine a haunting new light onto the wreckage and demonstrate the sheer scale and magnitude that the attack had on Manhattan.

On the morning of September 11th, 2001, 4 commercial airplanes were hijacked and crashed into the World Trade Centre's Twin Towers, the western side of the Pentagon, and a field just outside of Pennsylvania.

Thousands of people were killed.

The footage from the attacks still horrifies us to this day.

Every year, the date comes round and we relive countless videos and pictures taken on the day of the attacks. Though they're heartbreaking and gut-wrenching to watch, it is so important that we remember what happened on that awful day.

And new footage has recently been unearthed...

Found amongst a stash of CDs bought at a house clearance sale, thousands of never-seen-before photos of Ground Zero in the aftermath of the attack were discovered, a whole eighteen years after the tragedy.

They offer a fresh insight into the huge clean-up operation.

The newly discovered photos show the construction sites in Ground Zero, views from the ground level, the damaged interior, and the twisted remains of the World Trade Centre.

It was by complete chance that the photos were discovered.

They were discovered by the partner of Dr. Johnathan Burgess at a house clearance sale in Massachusetts, who then went and released them through archivist, Jason Scott.

Speaking to the BBC, Dr. Burgess said, "Generally these items are neglected at sales. It's very likely these would be in a dumpster by now had we not gone. It’s a miracle the discs transferred so well, CD-ROMs of that age are pretty spotty." He used a CD recovery service to retrieve some of the images.

Though the original photographer is still unknown.

Dr. Burgess and Mr. Scott have so far been unsuccessful in tracking down the mystery photographer. Thousands of firefighters, police officers and construction workers spent time down in Ground Zero in the aftermath of the attacks, so it is likely the photographer could have been a service worker.

Though, sadly, many of these workers suffered from illnesses.

In the years since the attacks, over 40,000 service workers have seen a decline in their health, including respiratory problems, digestive-system ailments, and various cancers, which have all been triggered by the exposure to harmful chemicals and toxins from the rubble.

Dr. Burgess wants to track the original photographer down.

Burgess believes that sharing these photographs would be "doing what’s right for humanity." If you have an inkling or idea who this photographer might be, or even recognize any of the faces in the photographs, you can contact Burgess and Scott at gzphotos@textfiles.com. Because it would be amazing if any of these workers could be identified. So, without further ado... Keep scrolling to see a collection of the newly unearthed photos. They truly make you realize how much our servicemen did for our country on its biggest day of need.

The smokey ruins of Ground Zero.

The scale of the destruction from a birdseye view was simply staggering.

A worker is pictured among the debris.

Tons of debris was painstakingly sifted through in the hunt for missing bodies.

Two construction workers are pictured together at Ground Zero.

Firefighters worked through the night to tackle the flames.

One picture shows a make-shift memorial of those who had died.

The work continued throughout the night.

A poignant "We will never forget" banner hangs in the background.

Part of the World Trade Centre lays on its side.

The once-beautiful tower lay in ruins.

An unidentified NYPD police officer is pictured at the clean-up site.

A construction worker takes time out to clean his boots.

A group of construction workers evaluate the ruins.

The American flag remained as a poignant reminder that nothing can bring our country down.

Some rooms inside the World Trade Centre remained somewhat intact...

40,000 people have suffered serious health defects as a result of the toxins and fumes from the debris.

The debris was never-ending.

These men are heroes.

Thousands of our service men worked tirelessly around the clock, all in the aim to sift the debris and recover the many bodies that were still missing. Our country owes so much to these men, so it would be fantastic if they could be identified. You can find the full collection of photographs here.