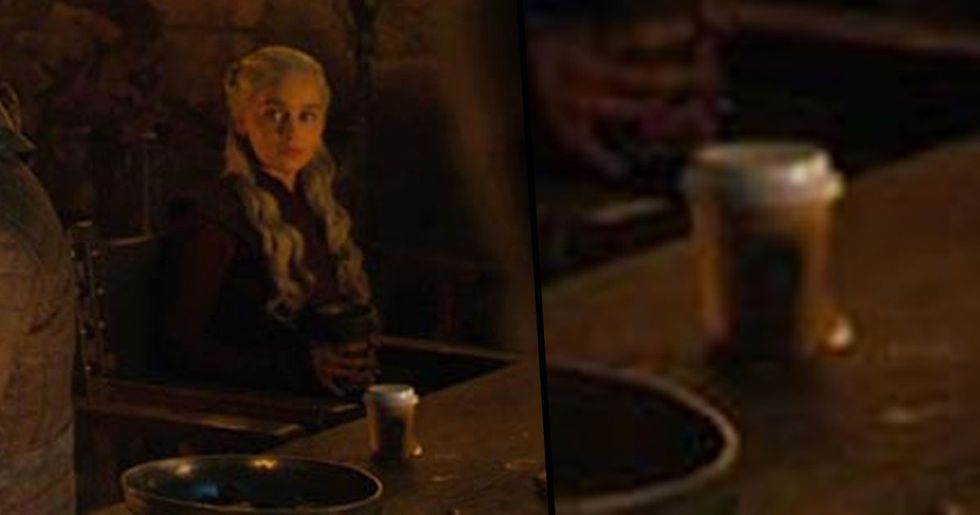 If you missed it (we're not sure how you possibly could), eagle-eyed viewers were surprised to see Daenerys Targaryen enjoying a takeaway cup of Starbucks coffee during last week's episode of Game of Thrones and they were quick to point out the mistake. The internet's reactions to the blunder have been hilarious - keep reading to see some of our favorites!

HBO has since responded to the mistake in Sunday night's episode of GoT in a press release and their statement is surprising to say the least...

There was plenty of wine to go around at the celebratory feast in last week's GoT.

But the Mother of Dragons clearly wanted to stay sober post-battle and opted for a coffee to go instead.

Although it's unclear where in Westeros she could have gotten it...

Certainly, no coffee chains have been mentioned in the show thus far but, you never know, it could be the next great plot twist!

Fans spotted the mistake right away and quickly took to social media to point it out.

Many were amused by the mistake and were glad to have something to poke fun at after such a serious and tense episode.

It definitely caused many to pause for a closer look.

In fact, several people believed the whole thing was a hoax when they first saw the comments on social media until they rewatched the scene and spotted the cup for themselves.

And it wasn't long before the memes started.

This is the internet after all. People really started to have fun with the situation and some got creative.

People began to speculate what Daenerys' order could be.

Not sure if a pumpkin spice latte would be fit for a queen. Maybe if it was a grande.

And there were plenty of jokes about her name as well.

To be fair, you would feel sorry for the barista that had to write all that on a coffee cup. Do you think they made her spell it out?

Some fans even blamed actor, Kit Harington, for the mix-up.

Kit is a known coffee addict and is not secretive about his frequent visits to Starbucks. It could indeed be his coffee cup.

Although he can't be judged too harshly.

Many people within the fanbase are huge coffee lovers. So much so that there is an impressive amount of Game of Thrones themed coffee art all over the web.

It would be the perfect revenge for the previous criticisms he's faced working on the show.

Some viewers even went the conspiracy route.

Considering the number of times each scene needs to be shot, it is strange that the cup wasn't noticed at any point during filming. Could it be a sneaky advertisement?

But not everyone saw the funny side of the situation.

The show received a lot of backlash across social media over the place and hardcore fans made it clear that they were not happy.

This isn't the first criticism the show has received this season.

In the previous episode, many viewers complained about the poor lighting and how it made it difficult to actually see what was going on during important scenes.

He brushed aside the criticisms and said he knew the scene wasn't too dark as he had shot it himself.

But this didn't sit well with fans.

Which is a fair point. When all your viewers are experiencing the same issue, it's probably safe to assume that it's a problem with the show and not the viewers.

And, in light of the coffee cup scandal, the mocking continues.

As mentioned before, at least the scene was bright enough to see the coffee cup. They're learning.

The show has also been accused of relying too heavily on tropes.

In particular, the Plot Armor trope, or Magic Bullet Shield, has allowed all the main characters to survive to this point, regardless of the amount of damage inflicted upon them.

Which, of course, many have seen as bad writing.

So it's not surprising that some people view the errant coffee cup as a symbol of the bigger issues with the show.

This has not even been the only continuity error so far.

As one Twitter user points out, Daenerys' hair has changed during one scene and the wrong surname was used for Gendry given that he is from the Crownlands.

But HBO was quick to respond on the official Game of Thrones Twitter.

According to them, the only mistake was the order. Poor Daenerys had apparently ordered an herbal tea but was given a latte instead.

Good to know they see the humor in the situation.

The joke did help to ease the tension and soothed some fans' anger over the mistake.

In an email to Variety, he said that similar things happen a lot on set, both on this show and others.

However, in this instance, he says the reaction has been blown out of proportion.

Because Game of Thrones is such a big show with millions of viewers, any mistake is going to be seen as way worse than it actually is.

And HBO hasn't been the only ones to respond.

Starbucks, themselves, have commented on the situation via Twitter.

According to them, a 'Dragon Drink' would have been a better fit for Daenerys.

This baffled many people who thought they were making the drink up to fit in with the Game of Thrones universe.

But it turns out it's real.

The drink is available in the US and Canada made with dragonfruit and coconut milk. Quite the PR move.

This could be a great marketing opportunity for Starbucks.

Perhaps they'll expand into Westeros in the future but, for now, the free promo must feel good.

But it's sure to be all business now with the Game of Thrones team.

With only two episodes left this season, people are on the edge of their seats waiting to see what's going to happen.

Especially who will end up on the Iron Throne.

So there's a lot of pressure on the crew to deliver. It's east to understand how a simple coffee cup can slip through the cracks.

So now begins the wait for the next episode.

Given the show's ratings, we know there's plenty of you out there waiting to see what will happen. Who do you think will sit on the Iron Throne by season's end?