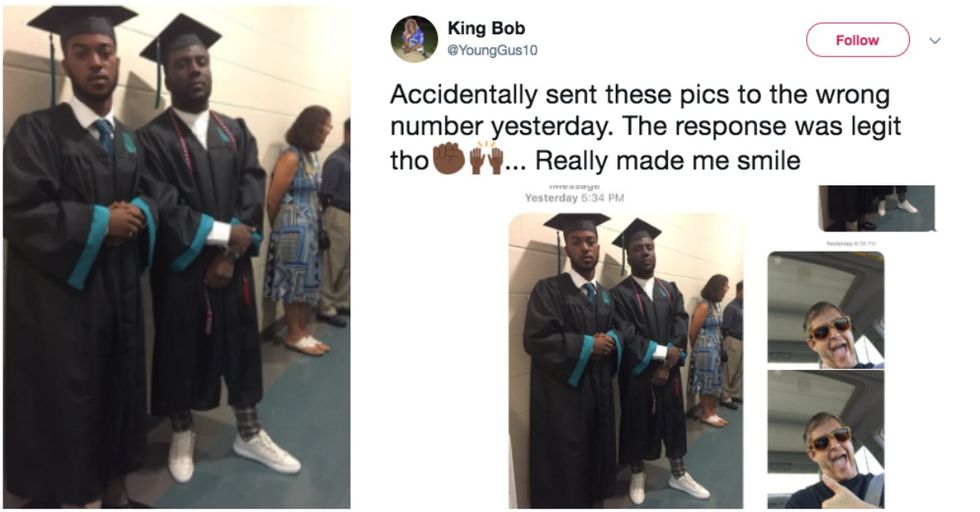 After they snapped a quick pic in their caps and gowns, this recent grad sent his friend a text with their photo.

Justin Campbell and his friend wanted to commemorate their momentous college graduation day with an awesome picture.

So they snapped a quick pic and Justin texted his friend a copy. At least, he attempted to send his friend the photo.

He seriously couldn't have mistakenly texted a more ideal recipient. These situations usually go so much worse.

Instead of texting his friend, Justin texted this guy!

His name is Roger Hawkins and he's a real estate agent. Hawkins could have responded with a blunt or even snide remark, but he didn't.

He responded with support and motivation!

Best. Wrong. Number. Response. EVER! Even so, the Twittersphere quickly noticed something alarming about Justin's tweet...

Once Campbell tweeted out the interaction, numerous commenters quickly rushed to Hawkins' defense, nervous because the tweet included his phone number.

Apparently, though, Hawkins — AKA the coolest wrong number text recipient ever — was super on board with having his phone number plastered out on Twitter for the world to see...and use. Once Justin confirmed that Hawkins was cool with his cell number being public domain, random Twitter fans started texting him hoping to get a response. And boy did he ever respond...

Hawkins has since received a ton of "wrong number" related texts. His responses have been everything you dreamed they would be and then some...

Thankfully, he's a super easygoing guy and has been responding to the influx of random texts like a pro. What a champ.

Dogs are even praising Hawkins' positivity.

So many exclamation marks! So much joy!

He has no clue who these texts are coming from and yet gifts as many as he can thoughtful responses. Sometimes strangers are just the best.

This situation could have played out so differently. The fact that it didn't is such a joyful reminder that humans gifting kindness to other humans — no matter what the circumstance — is awesome.

Also, having a sense of humor helps. It helps so much.

So next time you get a text or phone call from a wrong number, think you'll pull a Hawkins?

Feels like a low stakes way to brighten someone's day. Or weird someone out. You decide!