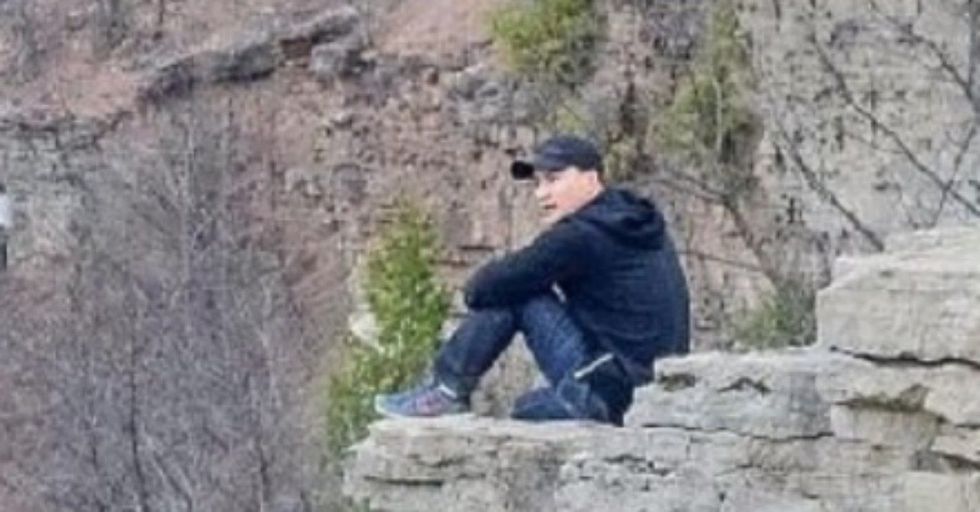 It's normal to go on vacation and take a lot of pictures, and given today's digital age, we get those images back the second that we snap them. But for one hiker, what he saw lurking in the background of one of those shots chilled him to the bone.

Reddit user SlicedUpBeef visited Dundas Peak in Hamilton, Ontario, with his friend after her cousin went there a few days earlier.

She'd shared this picture of her friend on top of the cliff overlooking Hamilton and the Niagara Escarpment. A little bit scary, but still really cool given the view.

So when they went up there themselves, they decided to recreate the photo.

When the two friends got home, they were excited to show her cousin their pictures. But that's when they noticed something a little bit...well, creepy as heck when they compared the two.

There was something strange-looking in the background of her cousin's photo that none of them had noticed before.

"Way below the edge of the trail, where the slope is too steep to stand on, there appears to be a thin person standing unnaturally straight with no visible face," he wrote on Reddit.

He added that while people had suggested it was just a really intense hiker, that spot is "completely inaccessible."

"Maybe it isn't a person? But I'm not sure what else it can be," he added. "I was hoping those who have also been to Dundas Peak and have taken a similar picture could share it. Hopefully we can figure out what the hell we're looking at." Reddit was quick to offer up a few suggestions: "Doing some research online, it looks like people go missing in that area about once a year? I can't find any definitive sauce on that though. Its creepy none the less," one wrote. "Either it looks like it might be an optical illusion of a person or.....you might want to ask the police to check for a possible suicide at the base of this site. i'm hoping it's number one," added another. "Given that it matches the other colors in the picture I would think it's just holes in the rock," wrote a commenter. "The white piece looks similar to the white rock(snow?) to the left of it. A skilled climber could easily get to that location but that's definitely not the case here." And then the most boring answer, but one that makes a bit of sense: "Sorry to burst all your bubbles, but there's a trail that leads up to that area and goes around the escarpment just under the rocks. That is, most likely, a person hiking around and ended up in one of your pictures. Cheers!" I guess we'll never really find out...what do you think?