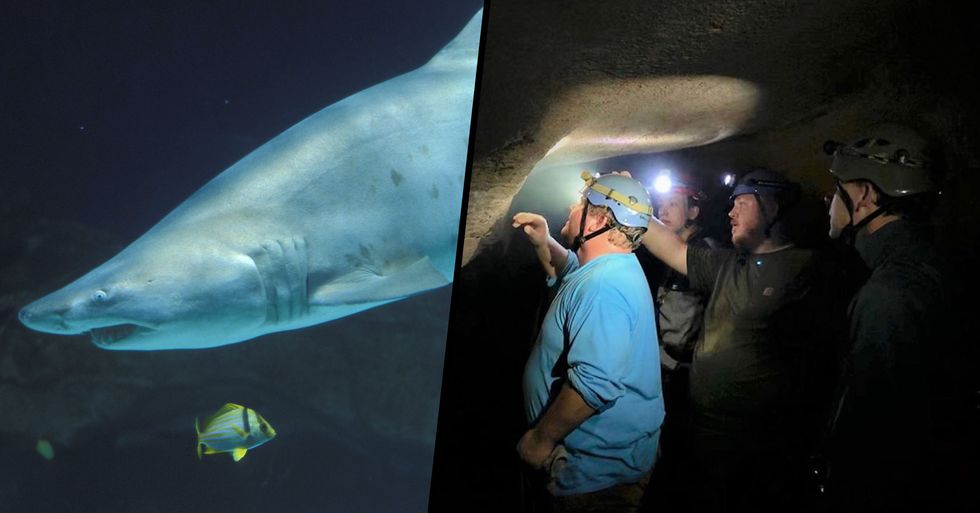 Paleontologists are amazed to discover an ancient fossil embedded in the wall of a Kentucky cave, but researchers are baffled.

They became particularly interested in one set of remains. When they found out what it was, everyone was amazed.

Are you ready to update your dinosaur knowledge?

What do Paleontologists do?

Paleontologists study the recordings of life on earth left as fossils. This includes the relationship between extinct plants and animals and their living relatives.

I always wanted to be a Paleontologist.

As a kid, my go-to careers were paleontologist or a ballerina. I think I only had one ballet lesson before I decided it wasn't for me. However, dinosaurs never get old. Well...

Dinosaurs had giant fleas with beaks the size of modern syringe needles.

Only 59% of U.S. adults know humans and dinosaurs did not coexist.

Hans Larsson is a scientist who is trying to reactivate dinosaur traits that exist in birds. So far, he has managed to create chicken embryos that have teeth and long reptilian tails. Nightmare material right there.

Prison officials have used the children’s song “I Love You" by Barney the Purple Dinosaur as a form of torture in Guantanamo Bay.

There is a Civil War/Dinosaur-themed amusement park in Natural Bridge, VA which features statues of Dinosaurs fighting Civil War Soldiers.

The first dinosaur bone described in scientific literature was thought to be the femur of a giant human.

7. I wasn't expecting that.

The chicken is the closest known modern relative to the T. Rex.

Although everyone makes fun of the T.Rex, it's actually the Canotaurus that has the smallest known arms of any dinosaur.

The largest known herbivore dinosaur; Argentinosaurus, is said to have grown 115 feet in length, and weigh more than a dozen elephants.

The Megaladon may have had the most powerful bite of all time, with a mouth stretching nearly 10 feet wide.

Paleontologists have discovered a shark head in the wall of a Kentucky cave.

The fossil was found last year.

The fossil was discovered by cave specialists Rick Olson and Rick Toomey, who came across the strange fossil while exploring and mapping Mammoth Cave National Park.

Researchers didn't know what it was.

They sent photos to Vincent Santucci, the senior paleontologist for the National Park Service, everyone hoped he could find the answers.

They brought in the big guns.

Paleontologist John-Paul Hodnett was sent in to get a closer look at the fossil. He became interested in a particular set of remains.

The paleontologists discussed the findings.

When discussing the find they said: "One set of photos showed a number of shark teeth associated with large sections of fossilized cartilage, suggesting there might be a shark skeleton preserved in the cave."

The findings were intriguing.

Cartilage doesn't usually survive fossilization, so the fact that a shark skeleton was found was rare, as they are composed mostly of cartilage. Their teeth, however, are made of bone and enamel, which means they preserve well.

Hodnett was amazed at the discovery.

"I wasn’t exactly sure what I was going to see in the cave during my trip in November. When we got to our target specimen my mind was blown."

The fossil was made up of the shark's lower jaw, skull, and teeth.

They are believed to have belonged to a creature roughly the size of a Great White Shark.

The shark comes from a species called ‘Saivodus striatus’, which dates back to around 330 to 340 million years ago.

The researchers have uncovered more than 100 individual specimens.

"Most significantly, the majority of the shark fossils we discovered come from a layer of rock that extends from Missouri to Virginia but never documented the presence of sharks, until now." Said Hodnett. He believes they have "just scratched the surface" in terms of uncovering fossils in Mammoth Cave. I can't tell if that's good or bad.