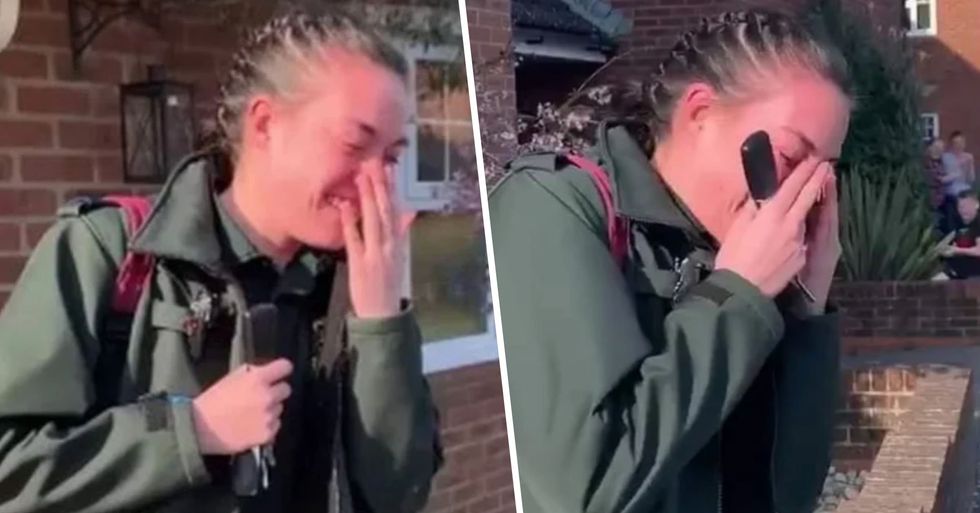 Cabin fever is slowly sinking in, and although it might feel like this is never going to end, to all the healthcare workers this is just another day of saving lives.

The UK has come together in the most amazing way, to celebrate the hard work of its healthcare workers.

People all across the UK have joined forces.

They have come together on doorsteps all over the country in a mass round of applause.

It was for the national "Clap for our Carers" event.

And was coordinated by Britons to show their appreciation to healthcare workers risking their own lives to treat those infected.

It's not just the UK.

Citizens on lockdown in France and Italy have been seen all over social media standing on their balconies, applauding staff.

The event was to thank all those working tirelessly to save lives.

The organizers asked people to clap from their doorsteps or through their windows at 8 pm to thank NHS staff, including doctors, nurses, GPs, pharmacists, and emergency workers.

There wasn't a single quiet street across the whole of the UK.

Even Prime Minister, Boris Johnson and Chancellor, Rishi Sunak joined in. They stood outside 10 Downing Street to applaud.

Emotional scenes as workers take to the front of Belfast City Hospital to join in with nationwide clap for our NHS.… https://t.co/pjGxZce6uJ
— Cool FM (@Cool FM)1585256012.0

In East London, as well as many other places around the country, people turned the event into a celebration, setting off fireworks, sounding horns, and blowing trumpets to make their gratitude heard.

One farmer even got his two-hundred sheep on board.

As well as members of the civil service including firefighters in Birmingham, with many clanging pots and pans. Cars and boats also tooted their horns.

It was an emotional event.

This came at a significant time.

It's the first time the daily death toll has surpassed one hundred in the UK, with 115 more people dying from the virus in twenty-four hours.

The Department of Health had encouraged people to take part.

Clap, cheer, stamp your feet and say thank you to all the @NHS workers who work selflessly all year round to look a… https://t.co/RLaGjCMmWU
— Russell Howard (@Russell Howard)1585243800.0

As had radio stations, celebrities, and charities all across the country.

Ironically, the UK's health minister has been treated for COVID-19.

Nadine Dorries wrote on Twitter: “At no time when I trained as a nurse many years ago, did I ever think I would have to face what our nurses and all frontline staff are dealing with right now. Tonight, at 8 pm I will be joining the nation in a hugely grateful round of applause. You are amazing."

Notable buildings were lit up in blue.

Our arch continues to be lit up in blue as part of a nationwide show of support and appreciation for the @NHS and t… https://t.co/SJeyqF1OGG
— Wembley Stadium (@Wembley Stadium)1585252801.0

It was part of the "lightitblue" campaign to say thank you.  A wedding venue in Wales even projected a message on the side of their building reading"Thank you, NHS."

But sadly not everyone could be there to listen to the applause.

Due to their hectic schedules, some healthcare workers completely missed out on the event.

Which was sadly the case for a young ambulance worker.

But the people on her street were aware that she was going to miss the event, and organized something so heartwarming.

She was left in floods of tears.

Outside our home tonight with my mother banging her utensils in support of the #NHS & #Fireworks being set off in t… https://t.co/vxT4F1sdDG
— Kishan Devani BEM (@Kishan Devani BEM)1585253085.0

On her way to start her shift on Thursday, March twenty-fifth, the entire street came out to applaud her.

She was overcome with emotion.

The cheers from her community, as well as her family, obviously touched the emergency care workers, as she walked to her car head in hands.

She was going to miss the event that same evening.

So her mum Ali mentioned to some locals that as she started work at 4 pm, she would miss the celebrations.

She thought nothing more of it.

No amount of clapping will show our immense gratitude and appreciation. Thank you NHS workers🌈💕#clapforourcarers… https://t.co/Ke47uBExZa
— Miss Tracey (@Miss Tracey)1585259148.0

That was until everyone turned up to show their appreciation by clapping her off to work. People even came together to bake her a cake and give Tayla some much-deserved treats.

Ali explained: "It was overwhelming for all of us."

Just some of our incredible ITU (Intensive Therapy Unit) heroes all prepped and ready for another day. 🙌 What can… https://t.co/XvuLjqyoWg
— MTW Hospitals (@MTW Hospitals)1585305485.0

"Tayla just couldn't believe it. She couldn't believe that people would even notice what she's doing. She just loves her job. I had no idea the whole street would come out. I just thought it might be our next-door neighbors and the house opposite. What I didn't realize was that every single house had at least one person come out to clap her."

She was clearly surprised by everyone's kindness.

"It carried on all the way up our street and you could hear them clapping all the way up the next street too. It was so emotional, I could barely speak. It was just overwhelming pride. We barely know anyone on our street. You see each other daily, but you don't know each other's names."

It came at the right time for Tayla.

She continued: "There's been some nights where Tayla's come back and we've had to sit down and she's had a bit of a cry from being exhausted. She's seeing things that are quite scary. But she goes out there and puts a brave face on. We don't know enough about coronavirus and that's not the only thing they're facing out there."

Tayla's mum added: "It's been so overwhelming. It's amazing how everyone has come together. I feel like our village is closer." This is just one of many positives to come out of lockdown, keep scrolling to see what others are doing to help during this pandemic...