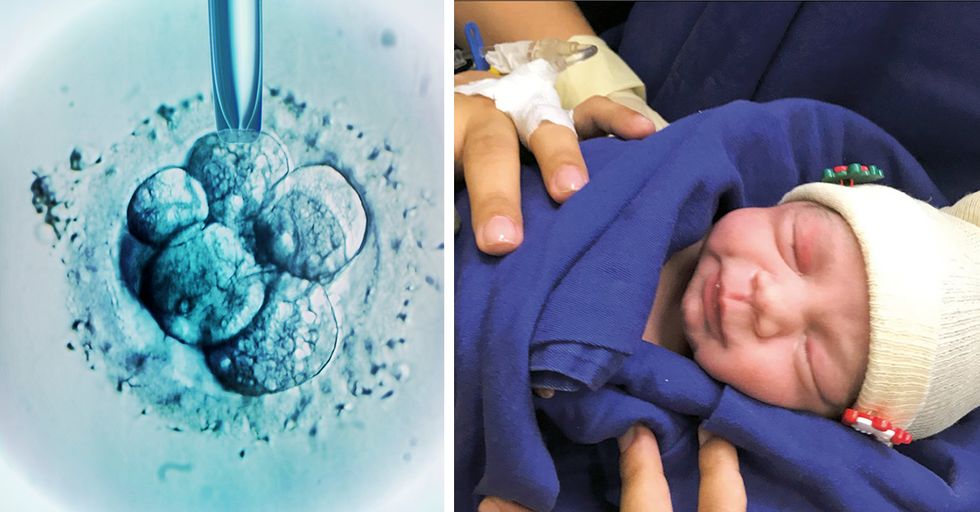 First Baby Born From the Transplanted Uterus of a Deceased Woman

Doctors in Brazil are making medical history after a child has been born to a woman who received a uterus transplant from a deceased donor.

In September 2016, a 32-year-old woman with MRKH (Mayer-Rokitansky-Küster-Hauser) syndrome, underwent a procedure in which a donated uterus was transplanted into her body in Hospital das Clínicas, University of São Paulo, Brazil. The unfortunate syndrome affects 1 in 4,500 women– these women are either born with uterine abnormalities or no uterus at all.

But luckily, for one woman, the surgery was a success. The 32-year-old mother was able to get pregnant and give birth to her child!

The deceased donor was a mother of three.

The donor was a 45-year-old woman who died of a stroke and was considered the best candidate for the organ recipient– due to the donor having had three uncomplicated vaginal births and a matching blood type. Doctors also explained that using a deceased donor reduces the complications that may arise with a living donor and reduces costs due to hospitalization.

This medical development is a significant advancement.

According to the authors of the medical study published on Tuesday in The Lancet, at least a dozen children in Sweden, the United States, and Serbia have been born to women with transplanted uteri donated by a living donor. Medical experts noted that using uteruses from deceased donors could make more transplants possible.

“The results provide proof-of-concept for a new treatment option for absolute uterine factor infertility," wrote co-authors Dr. Dani Ejzenberg, an ob/gyn at the University of Sao Paulo and Hospital das Clínicas in Brazil, and Dr. Wellington Andraus, a transplant surgeon at the Sao Paulo University School of Medicine in the study.

Although the 32-year-old woman born without a uterus due to her medical condition MRKH syndrome, she was born with ovaries which meant that eggs could be collected and used in IVF.

Four months before the transplant, the woman whose identity has remained anonymous underwent IVF, which resulted in eight embryos stored for later use after the uterus transplant.

The procedure from donor transplant to recipient lasted more than 10 hours.

Doctors inserted the uterus along with a stump of the donor's vagina connecting blood vessels and ligaments. The recipient later spent eight days in the hospital receiving immunosuppressant drugs which help control the body’s instinct to reject a transplanted organ.

Five months after the transplant, the recipient showed no signs of her body rejecting the uterus and no signs of abnormalities.

Several months later, the woman became pregnant through IVF after a single embryo was used. Throughout the pregnancy, all test results reported a healthy fetus with no abnormalities.

Mama and baby are doing fantastic!

The baby girl was delivered via c-section at 36 weeks on December 15, 2017. She weighed nearly 6 pounds.

During the procedure, doctors removed the donor uterus in order for the patient to discontinue the immunosuppressive therapy. Nearly a year later, both baby and mother are healthy, thriving and will celebrate the baby’s first birthday in a few weeks.

A major win for the fertility field.

Although there are studies of successful uterus transplants, the first was performed in Sweden in 2013 by Dr. Mats Brännström and his team, the results of this transplant conclude that a uterus donor can be used from a deceased donor.

Doctors are hopeful that they are on the path to help women with uterine restrictions that do not have the option of living donors.

The success of this transplant is bringing new opportunities for women whose options are limited or do not have the option of a living donor.

Doctors are also hopeful that future transplants could help further the study of implantation of embryos in the uterus.

The world responded to this medical first with amazement, some with skepticism.

It's an interesting subject and some Redditors had much to say.

If you don't feel a need for it, why not donate it?

I hope they find a doctor that can point them down the right path.

Some had questions about organ donation.

I am not quite sure about this either and I'm interested in knowing. Although I personally would like to know so that I can donate my uterus to a woman in need.

Thankfully, this commenter has answers.

It sounds like it's time for me to get a will and get my donations in order.

As much as I don't want to say it, I like this joke.

Babies, or as I like to call them, mini humans, are a dose of life's most amazing creations.

Whether you choose to have a baby with the help of science, surrogacy, adoption, or foster care, you'll quickly learn that babies are adorable piles of work. But all of the work is well worth it when you get to experience these tiny miracles grow and you'll be pleasantly surprised by the impressive set of skills these tiny humans are born with.

It sounds unbelievable because we're only used to seeing babies crawl starting at about 7 months old. But newborns do this out of instinct, it's called a "breast crawl." When the baby is born and laid on the mother's stomach, the baby will instinctively crawl up towards their mother's chest to feed. It sort of looks like a military crawl. I experienced this with my own children.

You would think that because we are much taller than babies we would have more bones than a newborn. Guess what, we don't.

Babies are born with 270 bones and by the time they are an adult, they will have 206 bones. Where do the bones go, you ask. What happens is that as the baby grows and develops there are areas of the skull and spine that fuse together. This is pretty amazing when you think about it long enough.

A baby is born with fluid in their middle ear that that impairs their hearing up to a certain extent. But because they learn it in the womb, newborns respond to their mother's voice and are able to distinguish it from others.

Oh but they definitely cry a lot! Their tear ducts don't produce tears until they're about 1-3 months old. Up until that time, their eyes only produce enough tears to protect and lubricate the baby's eyes. It's also probably why newborns spend a lot of their time with their eyes closed and sleeping.

They can't see much.

Babies are born with the capacity to see objects and colors. However, they can only focus on objects that are within 8-15 inches away. When held close, a newborn can see their mother's face, but not much beyond that. As the baby grows and develops, their vision improves immensely.

At 5 months old, a baby will be double their birth weight.

They are growing so fast that some days it may seem like you can't feed them enough because they constantly want to be fed. If you're currently experiencing this, don't worry, you are not doing anything wrong. These growth spurts usually pass within 1-2 days. After they pack on the calories they need, they'll be back to normal.

Researchers found that a newborns' brain grows extra fast right after birth and then it slows down to about .04% growth rate per day by the end of 3 months.

Sometimes newborns smile in their sleep and this is most likely a reflex smile. But most often, a smile in the very early weeks of their life is probably because the baby is passing gas. Don't worry, eventually, the baby will develop a "social smile" and this happens at around 6-8 weeks old. Get your camera ready!

At around 6 months old, a baby learns that each object they see is unique.

Before this, whenever it sees an object such as a bird, it always assumes it was the same bird.

As a baby develops in the womb, they're entire body can become covered in a thin layer of hair called lanugo. Researchers say they develop this because it helps regulate their body temperature in utero.

Don't be alarmed if you see a baby that almost looks like a tiny werewolf. The hair will gently fall off on its own during the baby's first few weeks of life.

As a kid, my mom once told me that I drank my own pee when I was growing in her belly. Of course, I didn't believe her.

When I became pregnant, it was one of the first things I learned while reading baby books. It's gross, but it has a purpose. Babies start urinating in the womb not too long after conception. And yes, they drink it. More precisely, it gets mixed up with amniotic fluid which surrounds the baby in the uterus. Experts say that this mostly serves as practice for the baby to learn to swallow and digest.

Babies are stronger than you think.

They may seem small and fragile, but they are able to lift their own body weight without any difficulty. You'll notice how strong they really are when you're trying to get a baby having a meltdown into their car seat.

The delay is believed to be related to the development of the kidney's, which start to process sodium at about 4 year's old.

They can sleep with their eyes open.

I've seen my third baby do this when she was a newborn and it always freaked me out. According to doctors, it's totally normal and harmless. Thank goodness! The medical term is nocturnal lagophthalmos. No one knows exactly why some baby's sleep with their eyes open. But if you're like me and it creeps you out, you can just gently stroke their eyelids closed.

Love the new car smell? Just wait until you get a whiff of new baby smell.