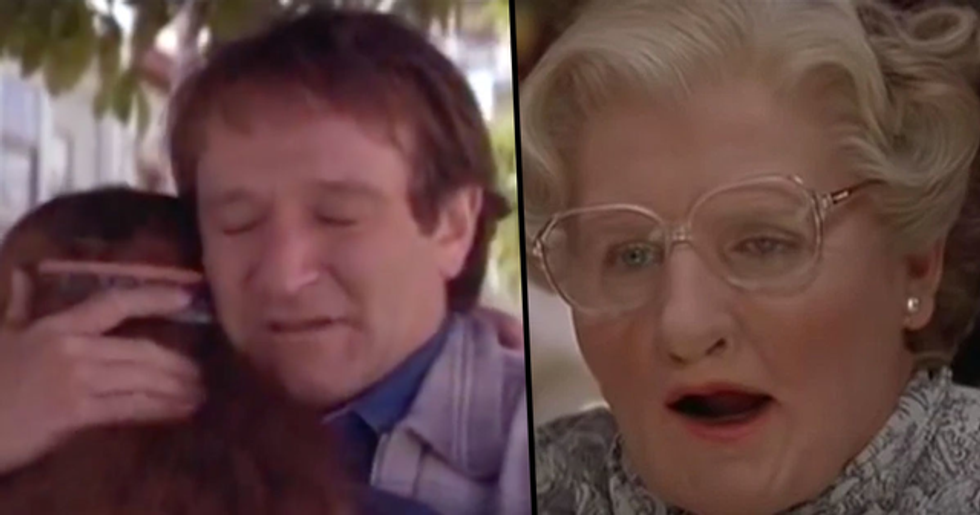 Last week marked 5 long years without one of the greatest actors and comedians of our time.

Robin Williams, aged only sixty-three, tragically committed suicide in his California home on August 11th, 2014 after a long and difficult battle with depression.

His suicide was a massive wake-up call regarding mental illnesses and demonstrated that, no matter how happy or funny someone may seem on the outside, you never know what they are battling with on the inside.

Following his death, the world went into mourning and remembered him for the vast joy and laughter that he spread in his many movies and stand-up routines. Various stories have emerged of the late actor, but the most recent has warmed hearts all over the world.

In the wake of the 5 year anniversary of Williams' death, deleted scenes from the movie, Mrs. Doubtfire, have been circulating around the internet. Deleted due to the somberness that they would cast on the film, the scenes only highlight Williams' sheer talent as a dramatic actor.

Keep reading to see the scenes deleted scenes, which are causing a whole wave of fresh new tears.

Robin Williams was, and still is, one of our country's most iconic actors.

Before he broke into the world of acting, Williams began performing stand-up comedy in San Francisco and Los Angeles during the mid-1970s, and is actually credited with leading San Francisco's comedy renaissance.

His debut TV appearance was in the sci-fi show, Mork & Mindy.

Williams famously landed the role by sitting on his head when asked to take a seat for the audition, with this demonstration of his quirky sense of humor instantly impressing the show's producer.

The role of the innocently bumbling extraterrestrial, Mork, threw the then-unknown Williams into the spotlight, ultimately enabling him to establish a career in both stand-up comedy and feature film acting.

He went on to star in dozens of iconic movies.

With classic titles such as The Dead Poets Society, Jumanji, Mrs. Doubtfire, Good Will Hunting, and Good Morning Vietnam under his belt, Williams quickly grew to become one of the most famous and unique actors that Hollywood has ever seen.

Yet despite his jolly and comedic demeanor...

Williams had plenty of his own demons to battle. The actor had famously relied on drugs and alcohol to cope with the pressures of his stand-up comedy shows and had suffered on-and-off from depression for years, which some think was triggered from his less successful movies in the naughties.

And, heartbreakingly, these battles got the better of him.

In May 2014, just a couple of months before his death, Williams was diagnosed with Parkinson’s disease, a degenerative disorder that impairs motor functioning. Doctors assured him that they had drugs that could control the tremors and that he likely would have another “10 good years." But, combined with his well-documented history with depression and anxiety, the diagnosis proved to be too much for Williams.

He was taken from us far too soon.

On August 11th, 2014, the heartbreaking, yet horrifying news emerged of Williams' death by suicide. He was found hanged in the spare bedroom of his California home by his assistant and was pronounced dead at the scene.

The world went into shock.

And all the questions came spilling out - but he didn't seem depressed? Robin Williams was really funny, he couldn't have taken his own life?

Williams was evidence that, no matter how big someone's smile is, you never know what's going on behind closed doors.

And he was proof enough that depression doesn't discriminate. Many people wondered just how someone with so much going for them could possibly feel depressed to the point of suicide. With all the money, fame, family, and success they have, to be depressed surely makes no sense? But depression doesn't work like that and can affect even those with the biggest of smiles.

And 5 years on, the grim reality of his death hasn't gotten any easier.

Williams left no suicide note, and his final and fatal act still remains unexplained. His wife, Susan, reportedly told investigators that he seemed "normal" in the days leading up to his suicide, and had never shown signs of wanting to commit suicide in the past.

But his legacy lives on in his work.

Williams brought joy and laughter to millions of people all over the world, and many of his movies remain firm comedy favorites to this very day.

And perhaps the most popular?

Of course, it's Mrs. Doubtfire.  Only Robin Williams could turn the ridiculous concept of a father disguising himself as a conservative old lady into one of the most iconic movies of our time.

The film is the ultimate heart-warming comedy.

Released in 1993, the movie follows the story of Daniel Hillard, a free-lance voice actor, and his battle to win back his estranged wife and, ultimately, win back the custody of his 3 children.

In order to see his kids, he comes up with the ultimate disguise...

As the Scottish nanny, Mrs. Doubtfire. Through his new disguise, Daniel is able to see his children every day and goes on to win his ex-wife back... by sabotaging her potential new relationship through the persona of the feisty and bad-mouthed old lady.

And Williams went on to win a Golden Globe for his hilarious performance.

But now, new footage has emerged.

In honor of the 5 year anniversary of Williams' death, deleted scenes from the film are now making the rounds. And it's undeniable to say that they are shedding a fresh perspective onto Williams' sheer skill and acting abilities.

The never-seen-before scenes stand as a poignant reminder of Williams' pure talent.

The scenes were ultimately deleted out of the film because director, Chris Columbus, deemed them to be too “heartbreaking" for audiences, and didn't want them to taint the comedic value of the movie.

Though, despite the film primarily being a heartwarming comedy...

The plot follows a divorced father desperately trying to get access to his children, so obviously brings with it deeply sad undertones, and some darker, less comical scenes.

The first deleted scene shows an emotional monologue with his eldest daughter, Lydia.

The first clip depicts a scene following Williams arriving to Lydia’s spelling bee competition. Lydia becomes distracted while her parents are audibly bickering in the crowd, resulting in a father-daughter confrontation that demonstrates Williams’ transcendent talent as a dramatic actor.

The clip is a guaranteed tear-jerker.

In one tear-jerking moment, Daniel (Williams) tells his daughter: "I am your father. I act like a fool but I am your father, OK? Always. Rain, shine, it's the one wonderful thing in my life."

And the second scene is just moving as the first.

The second scene, which was also removed from the final edit due to the somberness it would cast on the film, comes in the wake of Daniel's estranged wife finding out Mrs. Doubtfire's real identity. Their children are within earshot of their bitter confrontation, in which Williams demonstrates raw and heartwrenching emotion.

Williams' sheer talent as an actor was often overshadowed by his comedic performances...

But these deleted scenes prove just how much of amazing performer he really was.

In real life, Robin left behind children of his own.

His 3 children, Zelda, Cody, and Zak were vocal about the loss of not only their father but their friend, too. Zelda said shortly after his death: "My family has always been private about our time spent together. It was our way of keeping one thing that was ours, with a man we shared with an entire world. But now that's gone, and I feel stripped bare."

And Zak recently paid a beautiful tribute to his late father...

By naming his new baby son after his dad. Amazing. Keep reading to hear Zak's story, and how he dealt with his dad's horrific death.