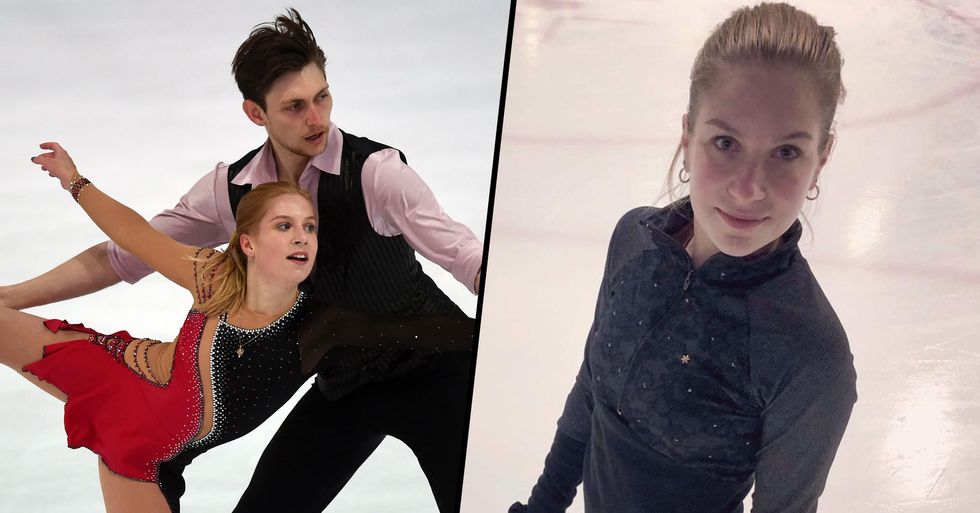 Tragic news reached us last week that Olympic Figure Skater, Ekaterina Alexandrovskaya had passed away. She was just twenty-years-old.

Now, heartbreaking details have been revealed about her death, and the revelations have left fans shocked.

Born in Russia, the star, also known as Katia, obtained Australian citizenship where she went on to compete for the country in the sport.

Alexandrovskaya started learning to skate in 2004...

But it was when she partnered with Harley Windsor where things really took off for the star.

The 2 began skating together in 2015 and went on to become extremely successful within the sport.

Their international debut came in early September 2016 at the Junior Grand Prix...

After showing huge promise, the following year, the pair made their senior debut.

The skating partners won the world junior title in 2017.

And they didn't stop there.

The pair competed in the 2018 Pyeongchang Winter Olympics, and while they place eighteenth in the short program, it's an impressive accolade in itself to compete at the Olympics.

And earlier this year, Windsor announced that the pair had split.

It was later revealed that the pair had parted ways because Alexandrovskaya was retiring from the sport.

The later end of her career had been plagued with health issues, including a diagnosis with epilepsy.

Just months after her retirement was announced...

Heartbreaking news has emerged that the star has passed away suddenly.

The tragic news was confirmed by The Australian Olympic Committee.

It is reported that the star died on Friday.

Windsor said he was “devastated" by the news of Alexandrovskaya’s death. "Words can not describe how I feel right now, I am devastated and sick to my core about the sad and sudden passing of Katia."

"The amount we had achieved during our partnership is something I can never forget and will always hold close to my heart."

He concluded his post by expressing his shock at the news.

"This news is something you can never prepare for. Rest In Peace Katia."

Chesterman said the news was a terrible blow for all those who knew the skater. "It is enormously sad to lose Katia, who was a vibrant and talented person and an incredible athlete," he said.

“She was quiet and humble in her manner but incredibly determined to be the best she could be. Life since the Games has not been easy for her and this is another timely reminder of just how fragile life is."

The Chief executive of the Olympic Winter Institute of Australia spoke of how she " has a special place in the country's sports history."

"Katia and Harley were Australia's first figure skating world champions. "She came to Australia to fulfill her sporting dreams. My thoughts are with Katia's family in Russia, Harley, and the skating community in Australia," they said.

She has been described as having "remarkable potential."

"I will remember Katia as a young person of great talent and remarkable potential."

Tributes have been flooding in for the skating star.

It's clear that this terrible news has come as a huge shock.

The skating community has been left heartbroken.

The impact she had on the sport won't be forgotten.

She achieved some major milestones...

We are devastated to hear about the passing of Ekaterina Alexandrovskaya. The milestones she achieved with her part… https://t.co/gDUsfpzFZj
— Anything GOEs (@Anything GOEs)1595065520.0

And the news of her sudden death is utterly heartbreaking.

Many spoke of how much of a "lovely" person she was both on and off the ice.

"Please keep her loved ones in your thoughts and prayers."

People are struggling to come to terms with the shocking news.

More details surrounding her tragic death started to emerge immediately after her death.

And there were reports in Russia that say she died after falling from a window on Friday, as per Sky News.

However, now, new information has been reported.

Before falling from the sixth-floor window, Ekaterina left a note that read: “Lyublyu (I love)", according to Russian media.

A number of sources have now been speculating that Katia's death may have been suicide.

Her coach, Andrei Khekalo told AFP, that Katia had quit the sport after being diagnosed with epilepsy, and it is thought she also suffered from depression.

“I tried to get her to stay in sport at my own peril." This must be a heartbreaking time for her family, friends, and colleagues.

Her official cause of death has not yet been revealed, however.

Our thoughts are with her friends and family at this unimaginable time.