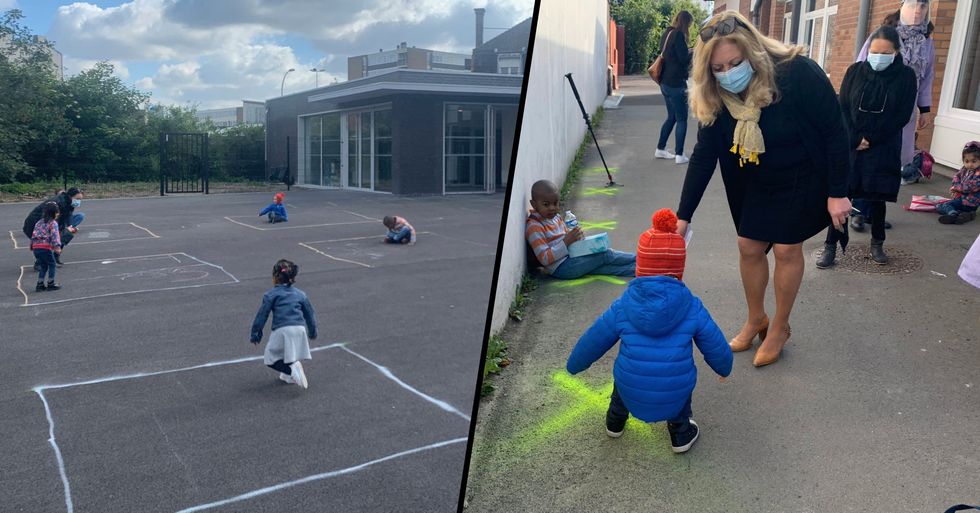 The reality of life with this deadly virus is becoming more real, as heartbreaking pictures have emerged of young children returning to preschool but unable to play with each other.

Keep scrolling to see the pictures...

And, as a result of fewer people out and about, our economy has taken a beating.

One of the devastating effects of this pandemic is the closure of our restaurants, shops and schools.

To prevent the spread of the virus, landlords and owners all over the world have been forced to close their doors.

It has been a truly dire time for our workers.

Which means we begin some normality again.

Many restaurants and shops are back open for business...

So we have to go to extra lengths to protect ourselves.

Because its better to be safe than sorry.

In France, 1.5 million children are beginning to return to school.

And whilst that sounds all great because they'll be able to see their friends again...

There are a lot of changes and precautions in place to restrict much of what they do.

As the children won't be able to play with each other.

Now that doesn't sound too bad.

But pictures have emerged of the social distancing in schools and they're truly heartbreaking.

They were even reported by French reporter Lionel Top as "very strange, even disturbing."

According to Little Things, Lionel went on to say that children seem to be adapting, "They laughed and played together but from far away. The pupils did not see it like a punishment."

In the images, children can be seen outside alone, playing in chalk boxes that have been marked out.

Classrooms can be seen looking very empty as the desks are far apart.

And hand-drawn yellow 'X's can be seen on the ground for sitting outside.

Whilst it may seem very strict, it is all to reduce the spread of the ongoing virus.

But regardless, the children seem to be getting on with it pretty well.

In fact, from the replies that Lionel Top received on Twitter, it seems that it is the adults who are more affected by the changes.

One user responded: "These photos are heartbreaking".

Another said: "With all my heart and courage. Personally, just seeing the photos, it makes me sick."

Whilst another user saw a different view: "Children who are happy to find school even under special conditions."

It's not just the playground that children are having to adapt to though.

The children even have a visor each.

At the minute, some preschools are only open to 250 pupils.

Val-de-Reuil's Twitter account, a town in Normandy, tweeted: "Back to school under high protection for 250 schoolchildren @valdereuil_info.Visor for each child, temperature measurement, classes redesigned to respect distances, lunch in class, staggered recess ... Everything has been done to guarantee their safety!"

Here in the States, we are not at that point yet.

But it does give us an idea of what might be to come.

Though we have no idea when schools may reopen here, New York City's Mayor Bill de Blasio has suggested that it might be a while before they do.

As he recently said, "This is a public health decision — and not an easy one. But it’s the right one. The social distancing strategies have been working, and we cannot risk a resurgence of the virus".

For many of us, we have accepted that school has finished for the school year. So now it's just a wait to see what happens.

To read more about what else has begun to reopen, keep scrolling...