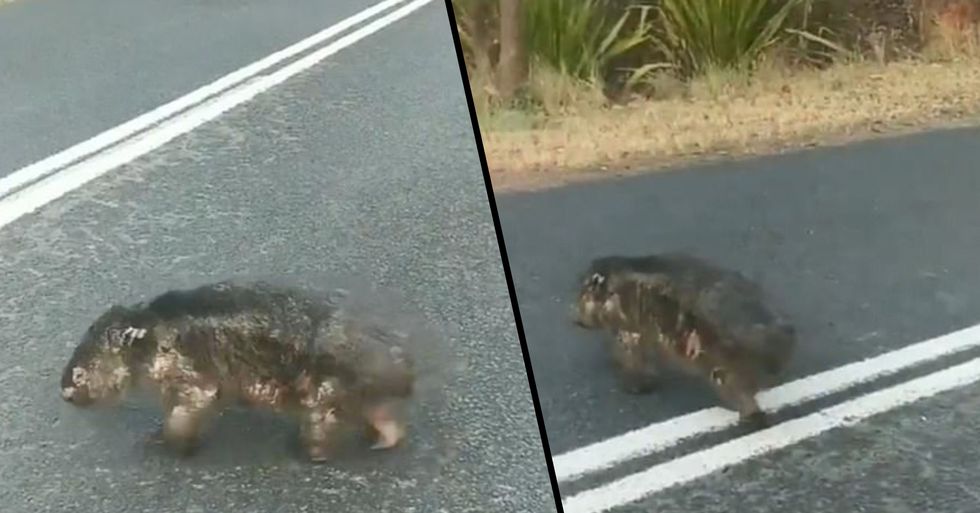 A staggering 1 billion animals have been reported to have died since the fires started in September, and things don't seem to be getting any better.

However, the animals who have survived are doing their best to adapt to these horrific conditions.

Keep scrolling to see a truly heartbreaking video of a wombat searching for food.

A billion animals have died.

The Times reported that it has been confirmed that a billion animals have been lost as a result of the fires.

And it is believed that around 25,000 koalas have died in the fires.

This isn't the only koala who is feeling the heat...

A couple of the little creatures have been caught on camera by Lorene McRae taking a cooling dip in a river in Tocumwal, New South Wales.

The photographs were taken over Christmas and New Year's Day...

Lorene said on Facebook that every day, the koalas would climb down and dip their bottoms in the water, despite the regular boats and jet skis flying past.

Lorene felt the photographs would cheer people up...

"Amidst the horror and heartache of the suffering and death of our beautiful wildlife, I thought it might be nice to share a 'feel good' story of hope," she wrote.

"Each day they climbed down the river banks at dawn to sit and sleep on the damp logs, on the sand or in the root systems of the fallen trees."

As cute as the photographs are...

This isn't usual behavior of koala bears, and it truly shows the desperation that these poor animals are currently in.

The unfortunate koalas are doing the best they can...

And all we can do is continue to hope and pray the temperatures in Australia will begin to dwindle so the country can start to rebuild itself.

And now a heartbreaking story of another animal has surfaced online.

Like the kangaroos and koalas, the wombat population has also been decimated in the blaze.

And those who survive are left badly burned.

As this video proves. It shows a helpless, burned wombat searching for food in New South Wales.

He claimed he first gave the needy animal a drink from his water bottle before filming the tragic footage.

And for more images that truly depict the chaos going on in Australia right now, scroll on for fifty of the most powerful images.