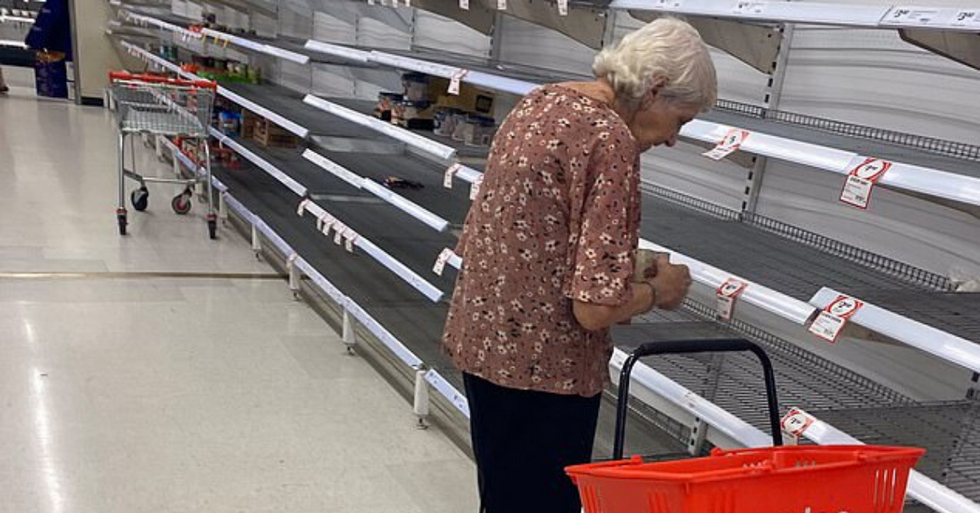 Sadly, it's the elderly and vulnerable who are suffering as a result of this selfish behavior.

Keep scrolling to see what's happening to those who are having to go without because of this mass hysteria...

If by some unknown reason you didn't already know, we are in the midst of a global pandemic.

And it doesn't seem to be slowing down. Originating from the Chinese city of Wuhan, a deadly virus known as the coronavirus has been rapidly spreading across the globe.

It has been confirmed by Worldometer that 3,408 people have now died globally, with the majority being in mainland China. A further 100,379 people have been found to carry the virus and be infected.

The virus continues to rapidly spread, and traces of the disease have already been discovered and confirmed in 8 other countries including here in America, the U.K, Italy, Thailand, South Korea, Taiwan, Saudi Arabia, Japan, and Australia.

The people of Australia are in a mass panic right now...

According to the Australian health department, there are currently 709 confirmed cases in the country with 6 people now dead from the virus.

The toilet roll sold in Australia is made locally...

The women behind me at the Aldi check out #toiletpaper #coronavirusaustralia https://t.co/XnenmvnQaR
— Sonia G (@Sonia G)1583227796.0

So there is no chance of it running out... meaning these individuals are wasting not only their time but the time of innocent people needing to purchase their essentials.

This is causing a nation-wide panic...

And some poor people have been left unable to buy toilet roll when they actually need it.

Perth resident, Justine Bowers, came across the most heartbreaking thing recently when doing her grocery shop...

She stumbled across an elderly man desperately looking for toilet rolls amongst the empty shelves.

Here is the heartbreaking picture...

"This absolutely broke my heart seeing this old man grabbing tissues because there was no toilet paper left!" Justine wrote on Facebook. "I offered him the very few toilet rolls that I had as I couldn't bear to see him go without! Pull your f****** head in people and stop panic buying toilet paper!!! And shame on all the people who have been buying in bulk because it's affecting so many people who aren't fortunate enough to do so!"

And it truly outlines how this manic bulk buying is terribly affecting those who are less fortunate.

Sadly, it's not just a one-off case of selfishness.

Are you going to wait until the vulnerable start dropping in the streets from hunger? End panic-buying hoarding and… https://t.co/u01c46MfpV
— George Galloway (@George Galloway)1584703489.0

It's been happening all over, and another elderly woman has been photographed surrounded by empty shelves at a Coles supermarket.

Shoppers continue to hoard unnecessarily during the pandemic.

The heartbreaking picture was taken in the Port Melbourne store midday on Thursday.

According to him, the woman was in tears. He wrote: 'This captures who is suffering from the me-first, unnecessary, trend of panic buying."

Make the best of #QuarantineLife, but don't hoard. This is what happens when you hoard. The elderly staring at th… https://t.co/3of0o6Rv0t
— Matthew VanDyke (@Matthew VanDyke)1584646264.0

Coles has reported that panicked shoppers have bought up to 3 Christmases worth of stock since the pandemic was declared.

Matthew Swindells, Coles Chief Operations Officer had this to say...

"This panic-buying is unacceptable. Australia is a country that produces enough food for 75 million people and we'r… https://t.co/jtQGBgG53s
— News Breakfast (@News Breakfast)1584649728.0

"It's not a problem of supply, it's a problem of demand." He compared the scale of hoarding to 5 seasons without the usual 6 months of planning. He continued: "When you see that immediate lift in demand across a network as large as Coles, it punches a huge stock hole in our supply lines and it takes time to recover."

Twitter users have been slamming hoarders for buying in bulk.

There is enough food to go round if we don't buy it all at once. Supermarkets won't stop existing. Food chains will… https://t.co/jwLTssYOxk
— Matt Haig (@Matt Haig)1584698170.0

After watching the heartbreaking video, one wrote: "This really breaks my heart, the elderly have already given to society, why aren't we looking after them?? We will be them sooner than we realize. Bring in rationing....please let's look after the vulnerable."

While another wrote: "I am so disappointed with our country at the moment, especially our blatant disregard for our senior citizens."

But despite these figures, Australia is now struggling due to people stocking up during the outbreak.

Supermarket stores will remain open throughout it all, so there's no need to stock up. He said: "I can't be more blunt about it. Stop it. It's ridiculous. It's un-Australian, and it must stop. It is not sensible and it is not helpful."

An important update explaining how all Australians can work together to respond to the coronavirus. https://t.co/voOc8BMxn8
— Greg Hunt (@Greg Hunt)1584679131.0

"It has been one of the most disappointing things I have seen in Australian behaviour in response to this crisis. That is not who we are as a people. It is not necessary. There is no reason for people to be hoarding supplies in fear of a lockdown or anything like this. It is not something that people should be doing."

On Wednesday Coles introduced a dedicated shopping hour for the elderly and vulnerable.

Coles gave a statement regarding its decision, saying: "Coles supermarkets will temporarily change their trading hours to open 7 am to 8 pm on weekdays, with the first hour of trade open exclusively to customers who hold a government-issued Pensioner Concession Card, Commonwealth Seniors Health Card, Companion Card, and Health Care Card."

Coles has implemented this to ensure everyone gets what they need.

'Elderly hour.' Australia's elderly and disabled have been let in early to supermarkets to ensure they can buy ess… https://t.co/GHjKkJ8kf0
— AFP News Agency (@AFP News Agency)1584427962.0

They said: "Once this hour is complete, all other customers will be invited through the doors to complete their grocery shop. Supermarkets will also close no later than 8 pm to give our team members the time and space to extensively clean our stores and replenish the shelves for customers the next day."

On Monday, Helena Ellis, a Sydney based DJ shared something similar.

While shopping at an IGA store in Sydney, she came across an elderly man who was "at least 84," with "an empty trolley and was staring at empty shelves of bread," she said. "My heart broke."

Ms. Ellis had picked up the last 2 packs of hotdog buns.

So she decided to give him a packet of her own. She suggested it was time communities work together to protect the elderly, saying: "If you see an old person, please stop and ask them if they need anything... give them something from your trolley that is no longer on the shelves." Through it all, it's nice to see people coming together to help one another.