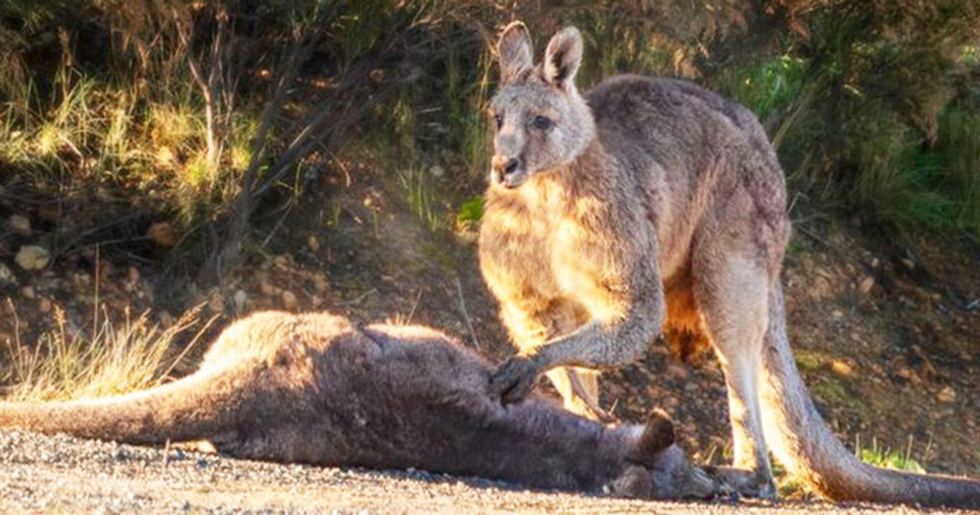 A heartbreaking photo has emerged today that shows the harsh realities of speeding cars in Australia's outback...

Kangaroos are one of Australia's most beloved native animals.

But, sadly, that doesn't mean they're always out of harm's way.

Every year, thousands of kangaroos are killed on the road...

Usually by cars and trucks.

It's always a devastating situation...

But it's made even more heartbreaking so when the kangaroo leaves behind a family.

So many grieving kangaroos and their joeys are left behind...

And, this week, a photo of this tragic circumstance was caught on camera, breaking the hearts of thousands.

A female kangaroo carrying a 6-month-old joey was struck by a speeding car in Yarra Glen, just east of Melbourne...

And was subsequently left for dead at the side of the road.

A buck thought to be the female's companion, avoided being hit himself...

But he was left to mourn the loss of his mate.

The Australian Society for Kangaroos broke the tragic news.

The organization, which describes itself as a company "dedicated to the victims of the world's largest wildlife slaughter," took to Facebook to show the world the harsh reality of speeding cars in the outback.

"Wildlife rescuers called to a deceased female kangaroo and her joey in Melbourne were overwhelmed with emotion when they found a male kangaroo standing over his dead partner trying to help her."

"Rescuers observed the male stroking the female looking clearly distraught over her loss and the fate of his baby now orphaned and lying helpless in her pouch."

Despite being moved by the sight, the rescuers wanted to capture the moment and share it with the world.

"The dedicated rescuers involved, Vicki Lloyd-Smith and Pam Rixon (who took the image), wanted to share these images to show the world that kangaroos are victims and feel pain and compassion, which is very apparent by the look on his face."

Prior to contrary belief, kangaroos are incredibly social animals...

And they experience emotion and grief in a similar way to us humans.

"Kangaroos are family animals with close family bonds and complex social structures. They are regularly witnessed in the wild and in care actively protecting their family, showing deep loyalty and affection and distress and grief when they die."

Kangaroos are known to live and survive in large groups...

And often engage in bonding activities such as nose touching or sniffing to build cohesion within the group.

Joeys are incredibly dependent on their mothers, too.

So, if a new mother is hurt or killed, the joey's chances of survival are slim.

Sadly, most Australians aren't aware of the impact these roadkills have on kangaroos.

"The impact of the unrelenting slaughter of these sensitive family orientated creatures across the Australian outback every night is horrific, yet most Australians remain unaware."

So, when they stumbled upon the grieving buck...

They knew that however disturbing the photo be, they just had to share it with the world.

via: Pam Rixon via Australian Society for Kangaroos

You can just see the pain in the buck's eyes as he stands over the body of his mate and joey - horrendous.

The 6-month-old joey rescued from his dead mother's pouch was taken to a nearby wildlife shelter...

But, sadly, he died from his injuries shortly after. They named him Floyd.

Let's only hope that it will spread the awareness of the impact speeding cars has on these beautiful creatures.

At the start of the year, Australia was torn apart by devastating bushfires, and thousands of kangaroos perished as a result. Keep scrolling to read more...