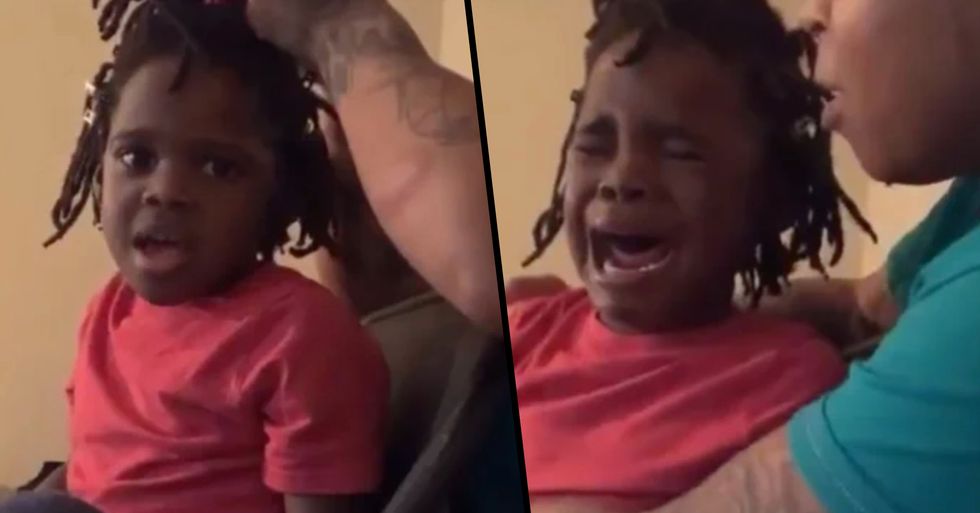 Bullying is a heartbreaking reality in schools all around the world, and the majority of children will find themselves a victim to these cruel people at some point in their lives.

A video has gone viral recently of a 4-year-old girl calling herself ugly after relentless torment from bullies and it has broken the internet's heart.

It is a devastating reality...

Bullying will always be a problem in schools all around the world.

So many people work tirelessly in an attempt to put a stop to this cruel behavior...

But cruelty continues to exist in our world, and especially with children, some people will never learn what it means to be kind.

The amount of children here in America who have experienced bullying is staggering.

According to statistics, between 1 in 4 and 1 in 3 U.S. students say they have been bullied at school, with many fewer having been cyberbullied.

Even though awareness of bullying is higher than ever...

It still seems to be a recurring problem in schools all around the world.

The story of Quaden Bayles is a prime example of this problem...

The Australian boy, who suffers from dwarfism, went viral this month after his mom posted a heartbreaking video of him crying after a day at school because of the vicious bullies who torment him on a daily basis.

Quaden was showered with kindness from all around the world...

Another heartbreaking video has emerged recently...

But this time, it comes from here in the United States.

And she regularly posts videos on her Instagram account of her styling women's hair... including young girls.

She recently had an appointment with 4-year-old Ariyonna...

And she recorded their appointment on Instagram live where Ariyonna is seen sitting on her knee as they chat whilst Shabria styles her hair.

Ariyonna caught the sight of herself on Shabria's Instagram live...

And whilst the hairstylist was chatting to the little girl, Ariyonna said simply and out of the blue, "I'm so ugly."

Shabria looks shocked when the little girl says this...

"Don't say that! You are so pretty," Shabria says as Ariyonna sits looking disheartened.

Shabria then gently takes Ariyonna's face and continuously tells her how pretty she is...

And this is when the poor little girl begins to cry.

This has clearly broken Shabria's heart seeing the poor little girl in this way...

"You're not ugly! You're going to make me cry now," Shabria says as she embraces Ariyonna and comforts her.

Shabria goes on to explain to Ariyonna how beautiful she really is...

She builds her up by telling her all the things she never seems to hear... That she is beautiful, that she has not one but 2 adorable dimples, and that her teeth are pretty and white.

She then tells Ariyonna firmly that she's not going to cry, and that she needs to go into class the next day full of confidence with how great she looks.

"You're gonna grow up and you're gonna be everything that you can be," she tells the little girl who is clearly struggling from low self-esteem - something a 4-year-old shouldn't be concerned with.

Not long after Shabria uploaded the video to Instagram...

It went viral on Twitter, with it being viewed over 10 million times. The assumption has been made that Ariyonna's low self-esteem has come from bullies, as Shabria stressed online that the little girl comes from a loving and supportive home.

Many have voiced their opinions over the subject online...

And a lot of people have agreed that it is devastating that many black girls grow up being told they are ugly and being surrounded by "pretty" white people.

A lot of people saw themselves in Ariyonna...

And the importance of complimenting children on a daily basis and encouraging them has been stressed.

This truly struck a chord with Shabria...

"It broke my heart into pieces because she has the GREATEST energy and the most beautiful smile and heart!" Shabria said.

"She comes from a great home & loving mother. I just think when kids go to school they learn and pick up sooo much different things that they don’t know the definition but they know the feeling! Keep her in your prayers and keep lifting up our future!!!"

Make sure to keep scrolling to learn about the full story of Quaden Bayles, and how his story impacted the entire world...