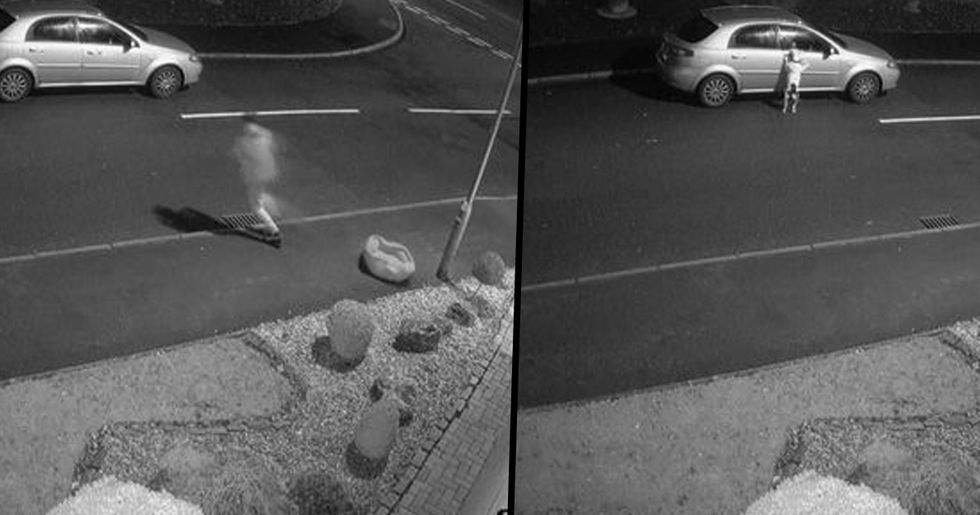 Heartbroken Dog Runs After Owner Who Abandoned Him On Road

The holidays are a time of warmth, generosity, and celebrating the ones we love. So when a video of a dog being abandoned by his owner on the street went viral just before Christmas, people were heartbroken at the thought of a precious pet being so callously cast aside — especially during the season of giving.

Miraculously, the poor pup was quickly discovered and delivered to a vet, and the internet has been working overtime ever since to help find a forever home worthy of his unconditional love.

Not your typical walk in the park.

Surveillance footage of the event initially appears to capture nothing more than a calm evening dog walk. The former owner exits the car on the corner of Timor Groce and Pacific Road in Trentham, UK at about 5 pm, with a doggy bed and an excited Staffordshire bull terrier -- a dog who’s since been nicknamed Snoop.

The two begin a stroll Snoop has no idea he will end alone.

After a few steps the man unclips Snoop’s leash -- every dog’s dream come true -- but the freedom is a cruel trick. As Snoop explores, the owner quickly drops the doggy bed and darts back to the car.

Snoop immediately senses his person is gone, and charges back toward the car. Despite his heartbreaking attempts to get their attention by jumping up and down in front of every window, the passengers show no mercy.

Seriously, how could someone be so heartless?

After a few moments, Snoop’s family drives away. He chases after them for a stretch before dejectedly returning to the doggy bed, his last remnant of home.

About an hour later the dog was discovered by a passer-by, thankfully before he was injured by cars or wildlife. Snoop was still sitting in the same bed, because he is clearly a very good boy.

They knew just what to do.

The good samaritan immediately took Snoop to a veterinarian, where he got his nickname as well as a clean bill of health.

The vet’s office also alerted the Royal Society for the Prevention of Cruelty to Animals (RSPCA), the UK’s largest animal welfare organization, where he’s currently being cared for while his case is investigated.

Who could have done this?

Heartbreaking footage of a dog being abandoned by the roadside has been released by the RSPCA https://t.co/KUpvNms3xY
— Sky News (@Sky News)1545672374.0

A microchip scan revealed two former owners for Snoop, but neither are believed to be responsible for the brutal abandonment. It seems the last “owner" may have housed the helpless pup unofficially.

Shocking video shows dog desperately trying to get back in car after being abandoned on roadside. How could anyone… https://t.co/B7U9Ah0XYA
— LADbible (@LADbible)1545653946.0

The RSPCA is not only looking for the person who deserted Snoop, but also for someone who might give the dog a new home.

The gut-wrenching footage was released Christmas Eve, captivating families who desperately wished they could give Snoop a better Christmas.

People were shocked at the display of cruelty.

Seeing a dog abandoned is painful enough, but few could believe someone capable of such an act right before the holidays.

They felt deeply for Snoop.

Viewers were heartbroken watching the pup begging to be let back into his family’s car, and chasing them as they sped away.

There were calls for retribution.

This is Snoop the abandoned dog, think the owner should be tracked down and reunited, not with the dog but maybe a… https://t.co/bugD92nEVg
— wizzywoz (@wizzywoz)1545748932.0

Some couldn’t help but express their desire to exact revenge on the owners for what they’d done to Snoop.

Others hoped real justice would be served.

Even the non-violent were moved to fury by the sight of a defenseless dog being cast away by the people he loved most.

@rickygervais I'm in tears, seeing that poor dog wagging his tail, jumping up on the side of the car..resignedly ge… https://t.co/ThR1j8SWxp
— Cathy Garside (@Cathy Garside)1545664329.0

The internet sympathized deeply with Snoop’s plight throughout every painful moment of the unbelievable video.

A tweet from Ricky Gervais boosted the story’s reach.

His brief statement captured the internet’s aching sentiment, and inspired reactions ranging from frustration to hope that the publicity would help Snoop would find a happy ending.

Some began sharing their own dog adoption stories.

Many saw the silver lining to Snoop’s tragic story -- that he would now have the same opportunity to find a family that their own rescues did.

There’s a lot of really good people out there.

Unlike Snoop’s former owners, most pet parents see their dogs as members of the family. People shared stories of the lengths they’ve gone to in ensuring their pup’s safety.

Unfortunately, pet cruelty is all too common.

Despite resources like the RSPCA in the UK, as well as the American Society for the Prevention of Cruelty to Animals (ASPCA) and other animal shelters in the US, a significant number of dogs and other pets are abandoned daily.

That’s why the internet was so thrilled when Gus, another recently rescued dog, found a happy ending early this month.

Gus had been abused.

The dog was rushed to a Texas veterinarian after being found wandering listlessly, with pellet gunshot wounds and rope embedded in his neck.

His resilience is inspiring.

After a few surgeries and a whole lot of love from a foster family, Gus made a rapid recovery and was officially adopted in early December.

This man was caught abandoning his dog right before Christmas. What happened next will warm your heart https://t.co/ugk4UYYNSa
— The Independent (@The Independent)1545834634.0

Stories like Gus and Snoop’s remind us to purchase pets responsibly, and to “adopt before you shop" whenever possible.

Dogs are a popular holiday gift, but many see pets as playthings that can be returned like any toy. Some shelters even temporarily stop adoptions around the holidays to avoid situations like Snoop’s.

Shelters are finding new ways to put pets in homes for Christmas.

This year, one shelter in Arkansas established a program that gives shelter pets temporary foster homes over the holidays.

No one wants to see a dog abandoned.

@SkyNews Won’t watch the footage but I have read that two potential owners have come forward to adopt him. I’m sure… https://t.co/lzPWbDcxrl
— Roger Winstanley (@Roger Winstanley)1545674219.0

But hopefully the holiday spirit will move a loving family to adopt Snoop sooner than later.

So far, there have been tons of offers.

The coverage not only invited happy adoption stories, but droves of people looking to adopt Snoop.

A forever home is pretty much inevitable.

Not only is Snoop a total catch, but now he’s famous. Who wouldn’t want to take him in??

There’s even a famous TV presenter in the adoption game. At this point, people are going to have to fight over him.

Looks like Snoop’s desertion was a Christmas miracle in disguise.

To the awful people who pretended to take Snoop for a walk and lied right to his precious face, all we can say is, “Your loss."