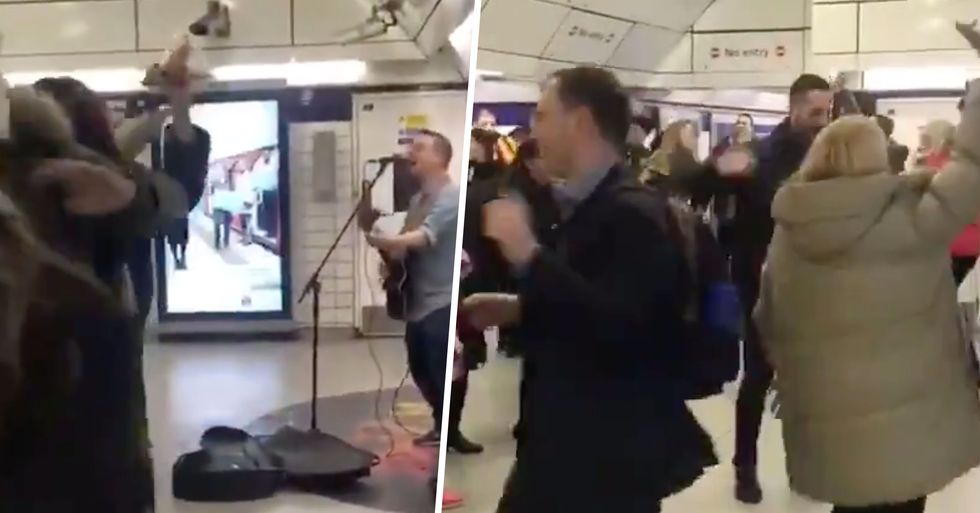 The London tube sees thousands of passengers coming in and out at all hours of the day. Usually, people keep to themselves or stick to their phones like glue while traveling, to prevent any form of social interaction from happening. I have to admit, before my morning coffee, I can't mentally comprehend anything.

But that's why this story is so uplifting...

Tube travelers came together to take part in an impromptu underground rave.

Leicester Square is an underground station in the West End of London.

It used to be a popular place for dueling up until the end of the 17th century.

Londontopia states: "In 1699, Richard Coote, the First Earl of Bellomont, killed a man a duel allegedly over the affections of a woman. He later became the colonial governor of Massachusetts, New Hampshire, and New York."

Famous statues can be found around the square.

Sir Isaac Newton, Charlie Chaplin, and William Shakespeare are all the statues that can be spotted.

This was one of the earliest maps of the area dating back to the 1500s, it shows that the square used to be used by women drying out their clothes on the grass while cows grazed. How times have changed.

You can actually walk faster on foot...

The tube route from Leicester Square to Covent Garden is the most popular route taken by tourists, but it's actually faster to walk.

Passengers have come together for the best reason.

The video shows the moment everyone broke out into song and dance.

The busker was happily surprised.

It was far from normal.

Instead of ignoring each other, they sing and dance with one another, making eye contact and laughing.

When more people stop to watch, he starts to play the classic song Twist and Shout by the Beatles.

This is how the clip begins...

The passengers start out dancing on their own before the conga formation breaks out, and obviously everyone wants to get involved.

The whole crowd gets involved.

I have to admit, it looks like a lot of fun!

The clip has been shared thousands of times.

Everyone who sees it has expressed their joy for this outbreak of song and dance.

“Complete strangers having fun. Love that."

“If we all could be together not fighting, not judging, accepting differences, standing together in life, and in this case dance what amazing world this would be."

Watch the video below...

Wes Streeting, London MP also commented: “The horror with which I greeted this, admittedly wholesome and joyful content, has made me realize the extent to which I have been institutionalized as a lifelong Londoner."