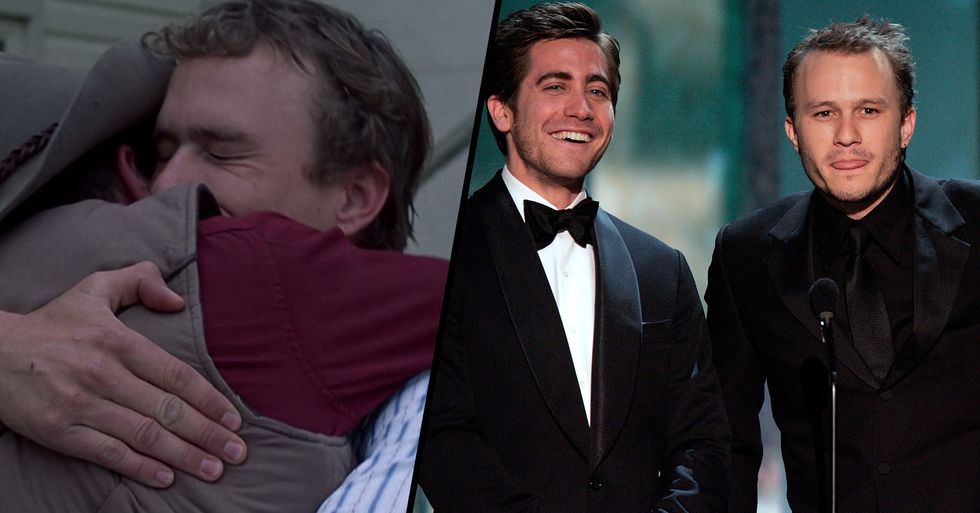 Heath Ledger is considered a legend in the world of acting. Though his career was shortlived, he managed to make an impact on the industry with his work. Outside of his professional life, it seems as though he had morals as a decent human being too.

Jake Gyllenhaal recently revealed the horrific joke that lead to Ledger refusing to present at the 2007 Oscars. And he had a very emotional response to it...

Heath Ledger is undoubtedly an icon.

Born on April 4th in Perth, Australia, Heath Ledger was known for his short career in the world of film.

However, that wasn't always his original career path.

In high school, Ledger found himself stuck between having to choose culinary arts or drama. The image of him being stuck in a kitchen baking all day was enough to turn him away from cooking class, so he opted for drama.

And even though he was talented at the subject, no one noticed.

But Ledger had a fire within him, so at the young age of seventeen, he packed all of his stuff and with a friend, traveled all the way down to Sydney, the land of dreams.

It was in the city where he searched for his "big break."

With barely a penny in his pocket, he worked hard to secure a spot in the industry and in 1997, he finally got a little one.

Though insignificant, this movie was the start of a special journey.

Blackrock was a very cliche, very angsty film about a boy's struggle to cope with the fact that his best friend raped a girl. ledger's part in the film was tiny and barely held any significance, but it ignited a hunger for more.

He then auditioned for a TV role.

It was for a show called Sweat, where he was offered one of two roles, a swimmer or a gay cyclist and being the open person that he was, he wanted to try a character out of his comfort zone.

So he took the gay cyclist.

And because of the "unique" nature of the role compared to the others, he started gaining more and more recognition.

After that, he pursued other more complex characters to play.

One of his most notable characters has to be the Joker.

But unfortunately, the actor passed away during the editing of the film.

In 2008, it was reported that Ledger had accidentally overdosed on prescription drugs including, pain-killers, sleeping pills, and anti-anxiety medication.

Even though his untimely death left a hole in the industry, The Dark Knight was a hit with audiences.

Some even consider him to have given us the greatest portrayal of the psychotic character, well, that is until Joaquin Pheonix came onto the scene.

But Ledger had already cemented his legacy.

In the lead up to playing the Joker, Ledger had starred in the romantic drama Brokeback Mountain.

The triple Oscar-winning movie left a dent in the industry for it's "risque" nature.

His role as a gay cowboy took him back to his humble beginnings in Sweat. The chick-flick gave him the opportunity to join forces with another young and upcoming actor we now know as the legend, Jake Gyllenhaal.

It propelled both actors to superstardom.

Other than the acritical accolades he acquired during the promotion of Brokeback Mountain, he also met Michelle Williams on the set and the two of them embarked on a 3-year journey together which resulted in a daughter, Matilda.

However, even though it was probably one of his best roles, there was a dark side to it.

Jake Gyllenhaal recently revealed that Ledger didn't particularly enjoy the consequences of taking on the character of Ennis Del Mar and it had nothing to do with the actual storyline, more so with people's warped views of it.

Because the storyline was very "unique" for the time, some people were against it.

Two openly gay cowboys? In 2020, that wouldn't be a problem, and it shouldn't have been an issue in 2005 either, but obviously it was for some people.

That's why when Ledger was asked to present at the 2007 Oscars alongside Gyllenhaal, he turned it down...

Why? because he was totally against the fact that people made horrific jokes about the love between the two characters in Brokeback Mountain.

In an interview with Another Man magazine (via NME), Gyllenhaal said this:

"I mean, I remember they wanted to do an opening for the Academy Awards that year that was sort of joking about it. And Heath refused. I was sort of at the time, ‘Oh, okay… whatever.’"

"It's about love," Ledger emphasized.

“That’s the thing I loved about Heath. He would never joke. Someone wanted to make a joke about the story or whatever, he was like, ‘No. This is about love. Like, that’s it, man. Like, no.'"

It seems as if these horribly homophobic jokes really got to Ledger and Gyllenhaal also recognized it too.

However, he also revealed that he still considers the movie as an important part of "today", which was back in 2019 claiming: “It opened tons of doors. It was crazy. It was amazing. It’s defined my career in different ways. [But the film] is bigger than me... It has become not ours anymore. It’s the world’s." A good watch, if I do say so myself. If you're in the mood for some more movie-related news, then keep scrolling...