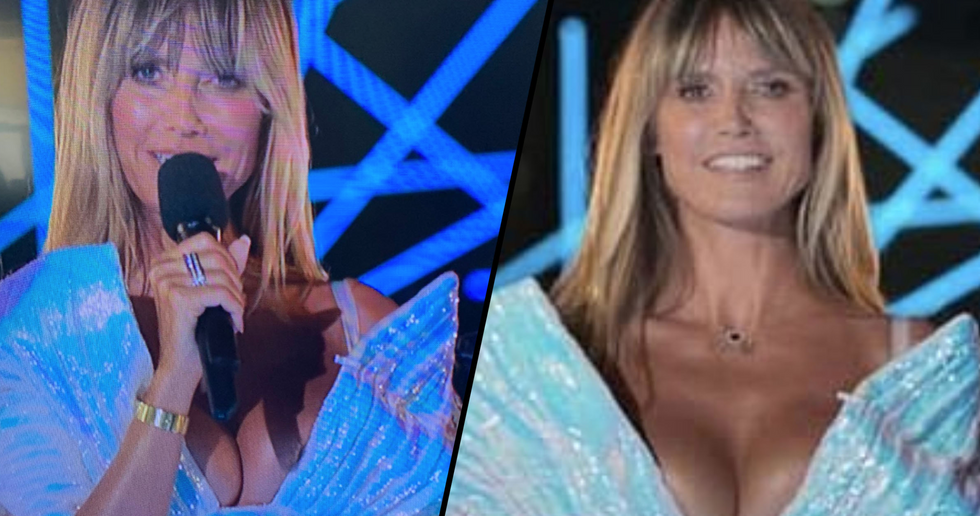 Heidi Klum is the Queen of Fashion and there's no saying otherwise!

But her most recent outfit during a TV appearance has been slammed for being way too "revealing" and "distracting" by viewers. Keep scrolling to check it out...

But her most recent fashion move hasn't impressed her fans, at all.

We all know and love Heidi for her career as a model and TV personality...

But her story didn't start here in America.

She was born and raised in a small town just outside of Cologne, West Germany.

After having a normal and quiet upbringing, Heidi enrolled in a modeling contest in 1992... and she, of course, won! This win sent her to New York to pursue bigger modeling ventures.

The forty-six-year-old has gone on to have a very successful career...

And she has graced the covers of countless fashion magazines internationally, including several Vogue covers.

She has also had several TV appearances...

Including being a judge for Germany's Next Top Model, Project Runway, and America's Got Talent.

Yep, she's well and truly made a name for herself.

Her outfits say it all!

But if there's one thing that everyone knows the model for...

It's her annual Halloween party.

Heidi is the Queen of Halloween...

She has been hosting her annual star-studded Halloween bash for nearly 2 decades now and she always pulls out the stops with her costume.

As the years have gone on...

But no matter what the model dresses up as...

Thanks to modern-day prosthetics...

Some of Heidi's most recent looks have been mind-blowing. Take Michael Jackson's Thriller werewolf, for example.

One of our personal favorites...

The most glamorous Shrek and Fiona we've ever seen!

But last year's costume was certainly the most extreme...

This must have taken hours to perfect!

These few examples show that Heidi really isn't afraid to reveal all...

But her most recent appearance hasn't impressed fans, at all.

Her latest TV gig has been judging on high-budget fashion competition series, Making The Cut.

The series has just dropped on Amazon Prime - meaning it was filmed last year before self-isolation rules were put in place.

The series finale became available on the streaming service over the weekend...

But as Heidi and co-host Tim Gunn presented the final two fashion designers’ runway shows, all eyes were on Heidi's very revealing dress.

And fans weren't afraid to call her out on Twitter.

The show is all about fashion design and allowing designers to show off their work...

So having fans staring at nothing but the judges' breasts isn't exactly ideal for these aspiring designers.

Here is the dress in question...

But there's no denying that Heidi looks fabulous.