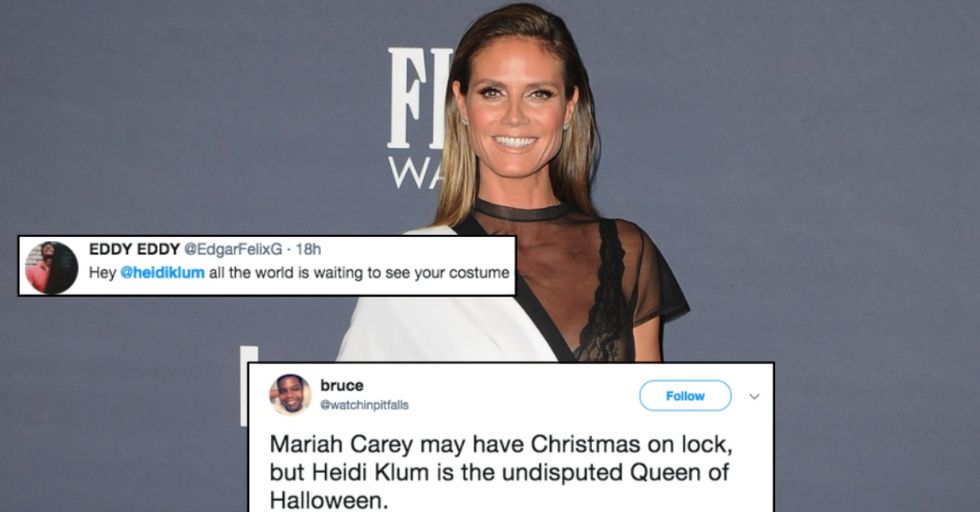 Heidi Klum always has extravagant Halloween costumes. One year she dressed as an old lady, and her makeup was so convincing that people thought she'd discovered time travel. Another year she dressed as Jessica Rabbit and looked like a cartoon come to life. This year she outdid herself, making some people think she was wearing a mask when she really was wearing layers of intricate makeup and prosthetics.

It took her seven hours to get ready, and she documented the whole transformation on Instagram.

What's she going to be?

Klum had a whole team of five special effects artists from ProRenFX helping her get into her costume for her annual Halloween party. People guessed at what she would be, but Klum kept it mysterious until the final reveal.

She teased videos of her intense preparation leading up to the party.

"It takes a long time to lay the prosthetics but then putting it all together, it took seven hours," Klum told People.

She's definitely going with a scarier costume than last year.

People speculated about what the costume would be after she shared this mysterious video.

Some of her Instagram followers thought she would be Groot, while others thought she was something from Jeepers Creepers or Chewbacca from Star Wars. You'll want to see how her extensive ensemble turns out...

She said that she started the tradition after wanting to get excited about a costume party in New York City and decided that she should just start her own.

And she said that when you're hosting your own costume party, you simply have to go all out.

She eventually put in fake contact lenses, but it wasn't easy. She doesn't wear contacts normally so it was a bit of a struggle to put them on. Stars of the likes of Dylan Sprouse, Questlove, and Mike Myers attended her party yesterday. Are you ready for the big reveal?!

Heidi is a werewolf!

She's wearing a wig, wolfy ears, a leathery gray chest piece, and even creepy hands with long, yellow nails. She captioned the post, "Happy Halloween!!!! ??????"" But she wasn't just any werewolf...

She donned a varsity jacket to become the werewolf from Michael Jackson's Thriller music video.

She and her posse of ghoulish zombies did a rendition of the Thriller dance before heading into her party. Klum said, "Obviously it’s difficult because I can’t dance like Michael Jackson. I don’t think anyone can dance like Michael Jackson, but I tried my hardest." Even if her dance can't rival the King of Pop, Heidi gets a ten out of ten in our book for extraordinary effort and Halloween spirit.