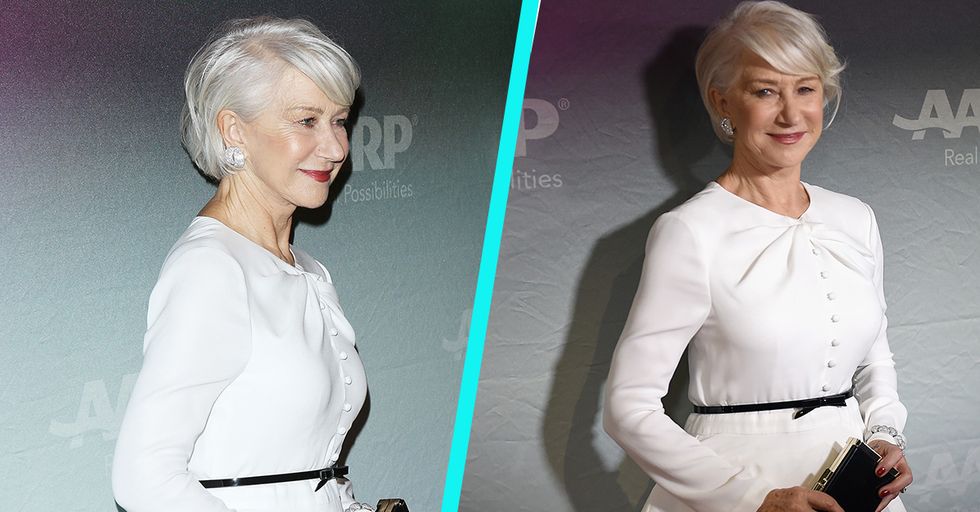 Do you know Helen Mirren?

The legendary British actress (not to be confused with Judi Dench or Maggie Smith) has been a staple of the stage and screen for 51 years since she began her acting career with the Royal Shakespeare Company in 1967.

Mirren is a living legend, one of the few performers in history to clinch the triple crown of acting – an Academy Award, an Emmy Award, and a Tony.
She has wowed audiences with her performances in such acclaimed movies as The Queen, Gosford Park, and The Last Station. She's also starred in more kick ass films like Red.
Oh, and she's stunning. Even at the age of 72, Mirren can rock a bikini like nobody's business, and her every style moment comes with a thousand yassss's echoing across social media.

Mirren is #goals for aging gracefully, and when she was young, she was just plain #goals. Mirren is confident about her body, and has appeared nude in precisely eight films including the notorious soft-core Caligula.
In fact, she even did a topless love scene at age 63 in the movie Love Ranch, which was directed by her husband, Taylor Hackford. The point is, Helen Mirren is an amazing, beautiful actress. And wouldn't you know she's been sexually harassed countless times?

Lately, the #MeToo movement has been in the press, with actresses and women from all walks of life speaking out about the harassment and abuse they have faced in their fields.

#MeToo gained momentum when reports emerged that legendary producer Harvey Weinstein had harassed, assaulted and raped 84 women. In the aftermath, noted actresses created Times Up, a legal defense fund and activist arm to pursue gender equality in Hollywood and elsewhere.

While all sorts of stories are pouring out from younger actresses, older actresses have had to deal with a lot. Case in point, Helen Mirren, who explained to Sunday Today host Willie Geist:

“I have never experienced [sexual harassment]…in Hollywood. Because [when] I came to Hollywood, I was in my 30s. I was too old. It doesn’t happen to you unless you’re very young."

Helen Mirren thinks the #MeToo movement is long overdue, says men would expose themselves to her "once a week" when… https://t.co/0MObZzehBk
— IndieWire (@IndieWire)1516404000.0

While Mirren does have a point, plenty of actresses were harassed when they weren't in the first blush of youth. Harvey Weinstein harassed Salma Hayek during the production of Frida, the film for which she was nominated for an Oscar. She was 35 at the time.

That does not mean, however, that Mirren did not experience harassment. She states,

“When I was between 16 and 23, 24—men would expose themselves to me often, I would say about once a week…on the subway, on the tube, on the bus, walking down a road and it was like, ugh…. It’s not like you’re gonna go, ‘Oh my god, that’s the most beautiful thing I’ve ever seen.’ It’s the opposite. It’s horror."