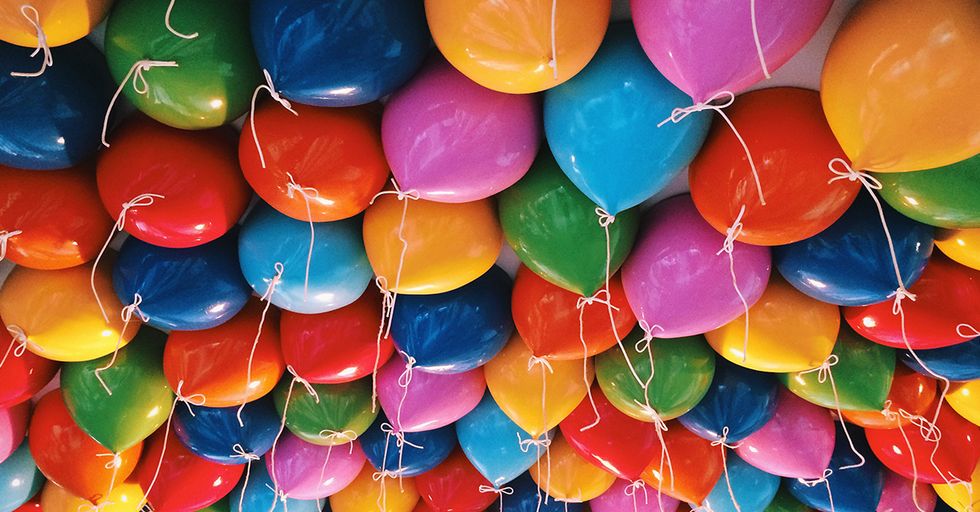 If you weren't already aware of (and concerned about) the worldwide helium shortage, you're about to be. We've got some bad news, folks. Everyone's favorite source of balloons, party favors, and weird holiday-themed decor is closing 45 of its stores. And it's all because of helium. Or rather the lack of helium.

Yes, apparently Party City is so reliant on the sale of balloons that the helium shortage seriously damaged their profits this year. America loves balloons too much (or we just can't think of any other way to decorate our parties). We're greedy for helium, and now we're all paying the price: the loss of our beloved Party City.

Journey with us through the tale of loss and helium to learn how Party City ended up making such a sad and horrifying decision. We are all mourning the loss of so many noisemakers and party hats. RIP Party Cities across the US.

Most of us know Party City.

It's the kind of store you visit if you want to make an event feel fancy, but not expensive.

Party City has been on the scene since 1986.

It was the first store to capitalize on the party good market.

It's not just about parties though.

They've also got a major market in Halloween, which was over 1/4 of their revenue in 2015.

But one of the staple items at every Party City has always been balloons.

Literally every kind of balloon you could imagine. Think it, they have it.

Filled with helium of course.

They've got balloons in the shapes of letters.

Basically there's a serious balloon situation at every Party City.

And it's a situation that I would like to be a part of.

We've been low on helium for months if not years now.

How is that possible?

If you paid attention in science class, you might remember that helium is the second most abundant element in the universe.

So why are we running out?

Well even though there's a lot of helium out there, most of it isn't in a form we can use.

In order to use helium, we have to extract it from natural gas.

And not all natural gasses have enough helium for it to be worth it.

Meaning there's a limited supply of what we can actually access.

And when there's a limited supply, but demand keeps going up? Shortages.

Plus it turns out that balloons are the last priority when it comes to helium distribution.

I know it sounds harsh, but "cool party decor" just doesn't measure up.

Especially when the other options are "important medical equipment" and "amazing space exploration".

This shortage has caused a major dent in Party City's profits.

By "major dent" we mean "multi-millions of dollars in a single quarter". Ouch.

It is a bummer, but there are some upsides.

It's given us the phrase "helium challenges" which sounds like some kind of euphemism.

But this is a blow to a lot of people.

45 stores closing means a lot of jobs lost, and a lot of parties gone un-decorated.

Seriously, the internet is surprisingly upset.

It's ok Betsy, you can get your fix of faux leis on Amazon now.

Although other people are less serious about the issue.

Gifs are an important part of any crisis.

There's a double layer to this pun because helium is in fact a noble gas.

Wait, hold on...did that headline say Congress could agree on something?

Yes, despite all the challenges that we have in our country, the one thing that our government can agree on is that we definitely need more helium.

Have you ever heard of Congress being that certain of a course of action?

Unfortunately, it was too little, too late for Party City.

But despite the closures, Party City seems to be on the rise.

They just announced that they've found a new source of helium. BALLOONS HERE WE COME.

Get in line for balloons y'all.

“This helium should allow us to return to normal levels of sales in our balloon categories," said James Harrison, chief executive of Party City.

Thanks to the new sourcing, Party City's stock prices are inflating.

So while we say goodbye and good luck to the 45 stores that are closing...

We look to the future with hope.

A future of balloons.

A future of helium.

I think the only appropriate way to mourn/celebrate these closings and the new helium source...

Is with a party.