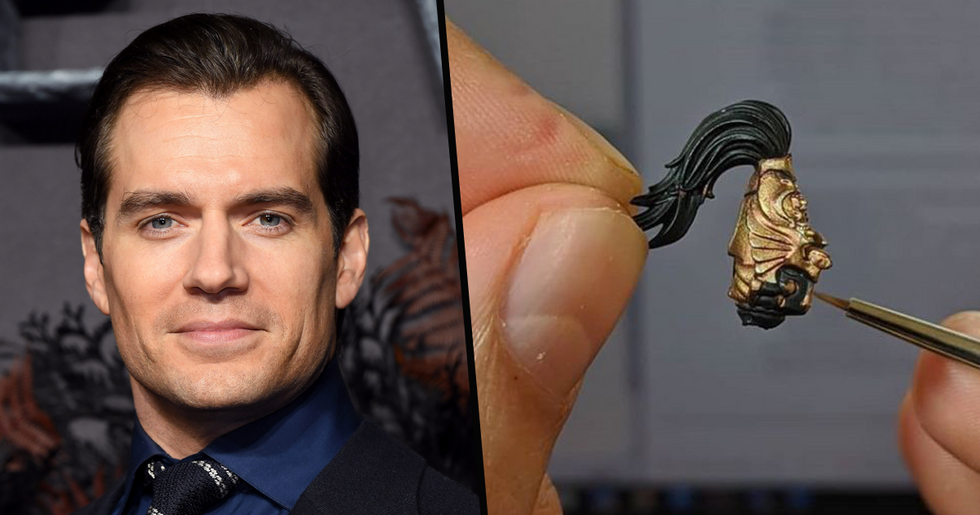 The real-life Superman and closeted video game geek, Henry Cavill, has been passing time in self-isolation by painting tiny game figurines... And they're incredible.

Keep scrolling to see his amazing artwork for yourself...

Henry Cavill is the gaming nerd none of us knew we needed.

The British actor has recently revealed his self-isolation antics and, let's just say, they weren't what any of us were expecting.

But let's start from the beginning...

The thirty-six-year-old initially gained fame from his portrayal of the iconic superhero, Superman, where he played the infamous role across 3 different movies: Man of Steel, Batman v Superman: Dawn of Justice and Justice League.

But, these days, most of you will undoubtedly know him best from his eye-widening role in the Netflix show, The Witcher.

How could any of us forget this?

Cavill's portrayal of the monster hunter, Geralt of Rivia, has gained the actor a whole new fanbase...

For reasons which are pretty obvious - Just look at him.

People were quick to fall in love with Geralt...

Which can only be credited to Cavill's dedication and passion for the role.

Because it turns out that Cavill went to extreme lengths to envision his character during filming.

The actor, who wore a weathered suit of armor and a long silver wig during filming, is said to have taken it all so seriously that he even “made breakfast" and slept in his costume. The Witcher producer, Lauren Schmidt, explained, “He wanted, for instance, for the armor to look like it had been worn for years and years. So, he made breakfast in it and he would sleep in it."

According to the team, Cavill was hugely invested in his character.

“We were like ‘you don’t have to do that by the way’, but he’s that invested in embodying his character. It was important to him. It’s one of the reasons why Henry is such an important member of our team."

He had to gain a tremendous amount of muscle for the role also...

And the actor reportedly got so ripped that he would tear through his costumes. Tim Aslam told Polygon that, during filming, Cavill’s “muscles wore down the leather at such an alarming rate" that replacements were “near-constantly" being made to ensure he was camera-ready.

But, behind all the masculinity and the muscle...

Henry is seemingly hiding a much quieter, more introverted demeanor.

Now, most of us have a pretty general idea as to what Cavill does for fun in his spare time.

Lifting weights, throwing axes, chopping wood in his yard... You know, all those stereotypically masculine hobbies.

Superman is actually a self-professed geek.

For starters, the actor loves to bake.

Cavill recently showed off a loaf of bread that he had baked in quarantine, captioning it with "isolation loaf." He's truly a man of all talents, isn't he?

Cavill posts regular updates on his various adventures with his American Akita, Kal. The dream man does exist after all!

And, on top of his love of dogs and fresh bread...

He is also a hugely passionate gamer.

Game Workshop's Warhammer has been around for over 3 decades now...

The tabletop battle game puts players in the command of armies of humans, elves, orcs, and a variety of twisted and monstrous creatures. Warhammer covers a massive array of tabletop games, RPGs, novels and, of course, videogames.

But, despite the vast number of formats the game can be played in...

The original tabletop version with miniature figurines remains by far the most popular.

And avid Warhammer fans aren't in it just for the game itself.

Fans of the game spend hours and hours building and painting their figurines, a process that requires patience, dedication and considerable artistic skill.

And Cavill is one of the many Warhammer fans who shares this passion.

The actor recently shared one of his incredible creations on Instagram, along with the caption: "I've decided to polish some old skills and try my hand at some new ones! It is a time of rebirth after all. So, as you can see here, the obvious might look a little bit like a tiny helmet...which it is. One of my almost life long hobbies, that I've been following but not actively doing, is this. A company called Games Workshop...or plastic crack as "we" call it. Genuinely can't get enough of the lore they have built over the decades."

"If you were in denial about me being a geek before, you can't hide from it now."

It seems that Cavill has been killing his quarantine time by building his very own Warhammer army... From scratch. Now if that won't keep him busy, I don't know what will.

In his post, he took a moment to thank the valiant work of healthcare workers...

And reminded his followers to "keep it up": "I imagine it might be feeling a little rough right now, but you Ladies and Gents are absolutely smashing it! Keep it up! You got this. 'Hold on a second,' I hear you utter.....'if he has both hands in the photo...how is he taking the photo??' New skills, my friends....new skills." For more on his role in The Witcher, keep scrolling to hear about the progress with the second season...