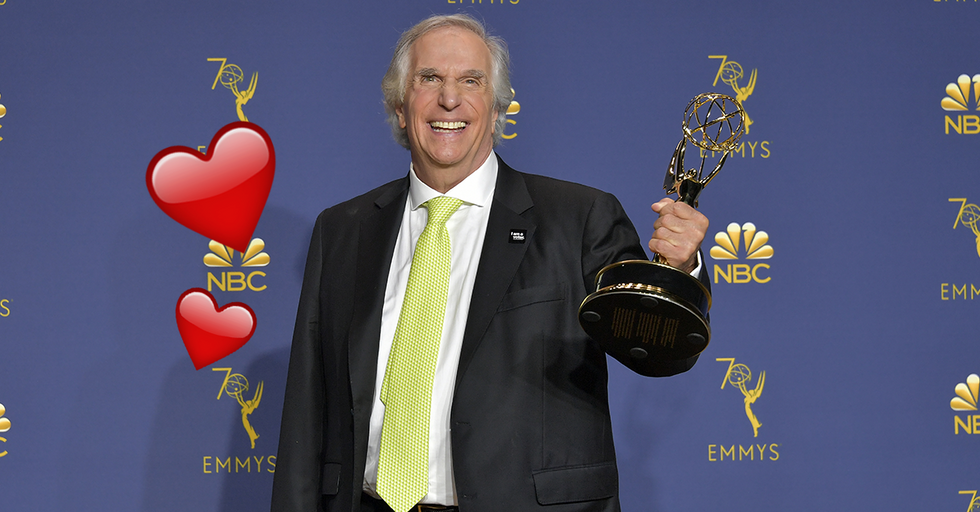 He's been around so long, you might think Henry Winkler's mantle is absolutely filled with Emmys. He probably used them as paperweights he has so many! He probably just hands out Emmy's to trick or treaters when they knock on his door for candy, right? Wrong! Even though he was first nominated 42 years ago, Henry Winkler has actually never won an Emmy: until tonight!

He gained fame for playing the ultimate cool guy The Fonz in Happy Days, which aired from 1974-1984, and Henry Winkler has been a well-known actor ever since that role. In addition to Happy Days, Winkler has appeared in what seems like every show on television: Mork and Mindy, MacGyver, Arrested Development, Royal Pains, Parks and Recreation, even Clifford the Big Red Dog, just to name a few.

But he'd never won an Emmy for any of his many, many performances, until tonight that is.

Henry Winkler won an Emmy for Outstanding Supporting Actor in a Comedy Series.

He won for his role in the comedy Barry.

Barry is a dark comedy about a hitman who moves to LA and becomes an actor.

Winkler was first nominated for an Emmy in 1976 for Happy Days.

He was nominated three times for his role of Arthur Fonzarelli in Happy Days, but never won.

Later he was nominated for two other Emmys.

Once for his narration in a documentary film, and once for a guest role on The Practice. He never won.

But tonight, it was a different story!

Winkler recieved the very first award at the 2018 Emmys.

He had some tough competition.

Winkler was up against Louie Anderson from Baskets, Alec Baldwin as Donald Trump in Saturday Night Live, Tituss Burgess from The Unbreakable Kimmy Schmidt, Brian Tyree Henry from Atlanta, Tony Shalhoub from The Marvelous Mrs. Maisel, and Kenan Thompson from Saturday Night Live.

He thanked his kids and told them they could go to bed now, guess they got to turn in early!

Winkler shared a hug with Bill Hader, who created the show with Alec Berg.

Winkler had some emotional words about his long wait.

He said in his speech, "If you stay at the table long enough, the chips come to you."

Hopefully it's not another 42 years before his next one!